My Favorite Kiddos in the World

Fall is a busy time for me.  The sun is setting earlier, there is literally less time in a day.  Everyone loves the leaves’ changing colors, so there are engagements, senior and family portrait shoots filling up many of the precious daylight hours between school letting out and sundown.
You know the thing that they say about the cobbler’s kids not having any shoes?
Well, I decided to shake things up a bit and take some time to capture my own children on camera at this moment in their lives.  They amaze me daily and I thought I’d share some of the things that I love most about the little people that mean everything to me.
Yes, these photos were taken in fall– no it doesn’t show any fall color– at all.  It just shows the personalities of my two very favorite kiddos in the entire world in old fashioned black and white.
I’m going to start off with Danny.  First, this little man is creative and unpredictable.  I saw him climb up the slide and assumed I’d catch him sliding down, nope! 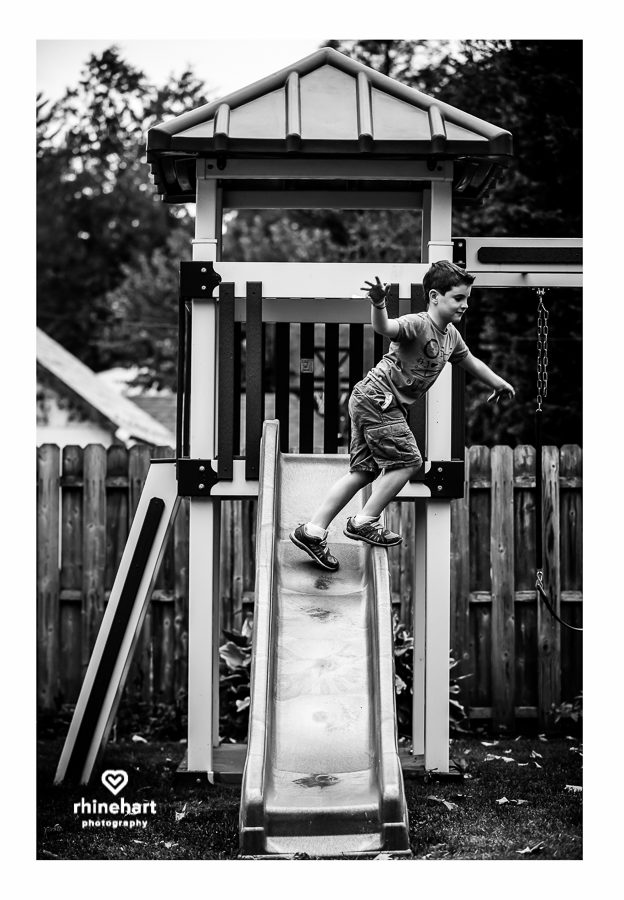 I had anticipated him swinging really high on the swing, nope… 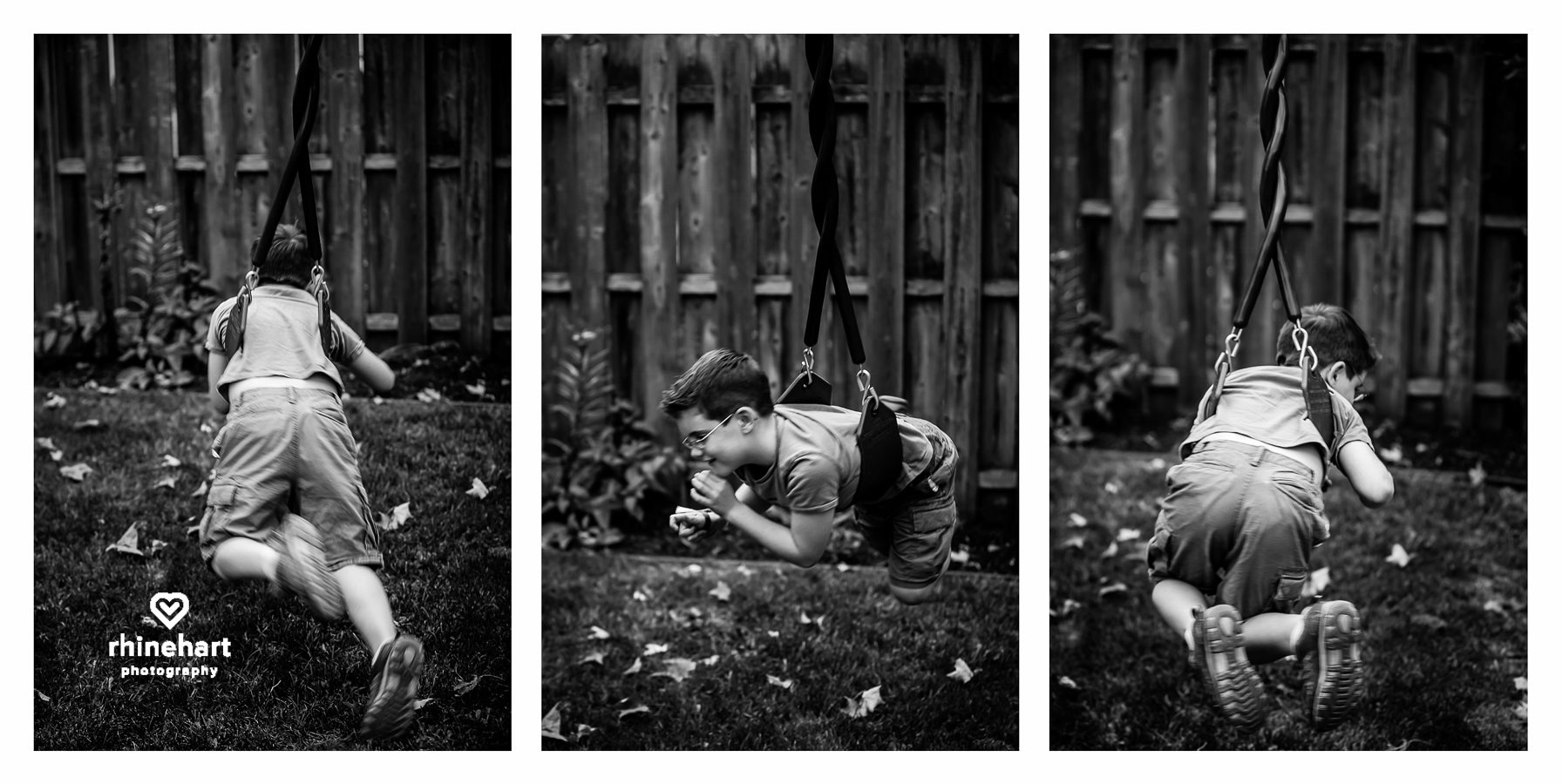 I thought we’d just take a few photos in the back yard, but here he is peeking back at me through the garage window from the alley… 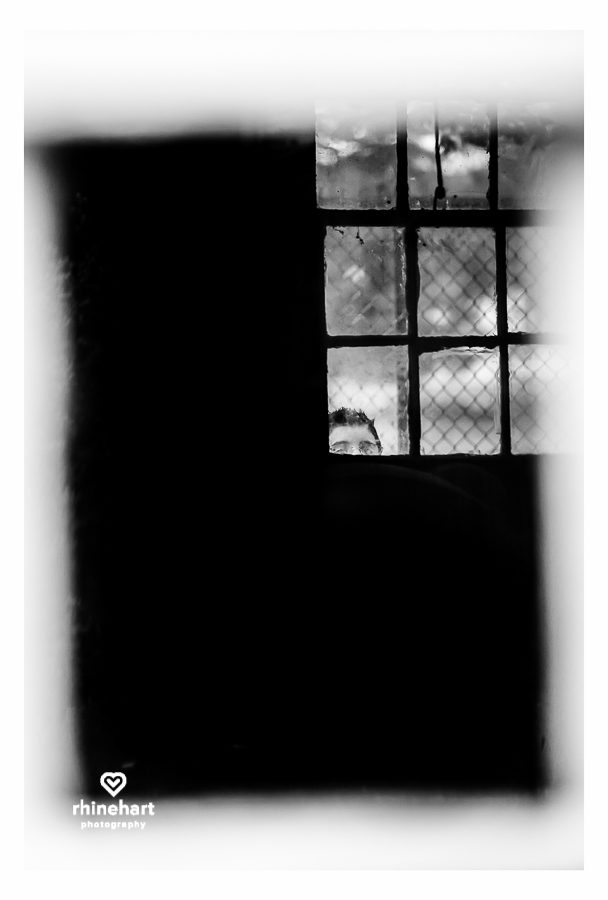 He had other plans…

Danny is innovative and charming. 😉 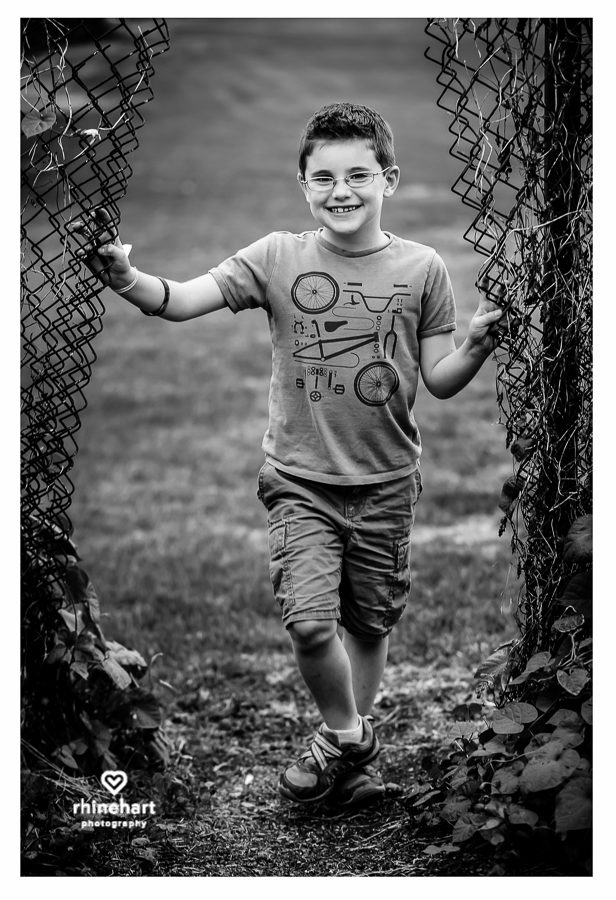 Once through the fence, he sprinted.  I used a slow shutter to show the movement of his body: 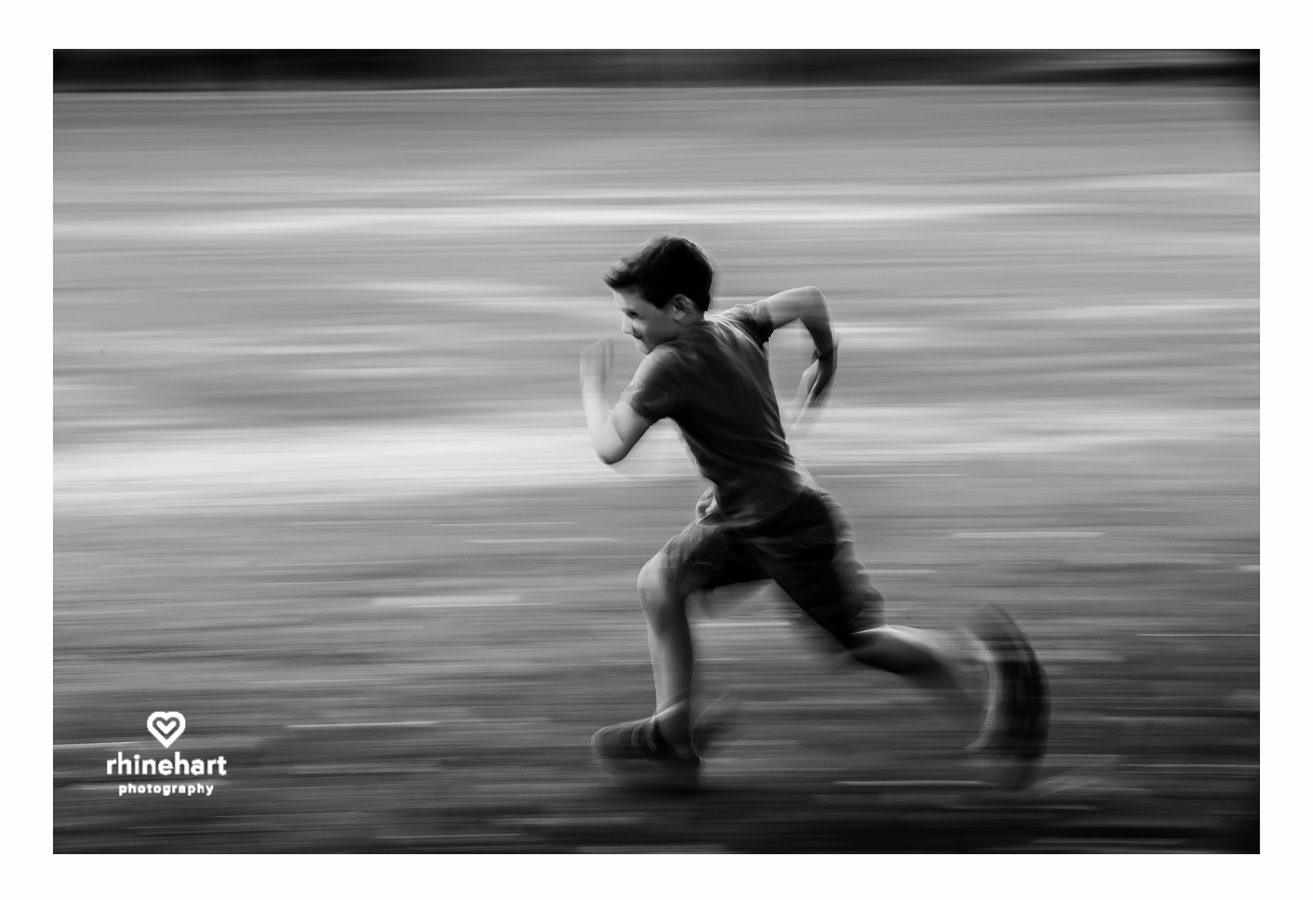 After lapping circles around me, he grew tired and rested against an old pole of some sort. 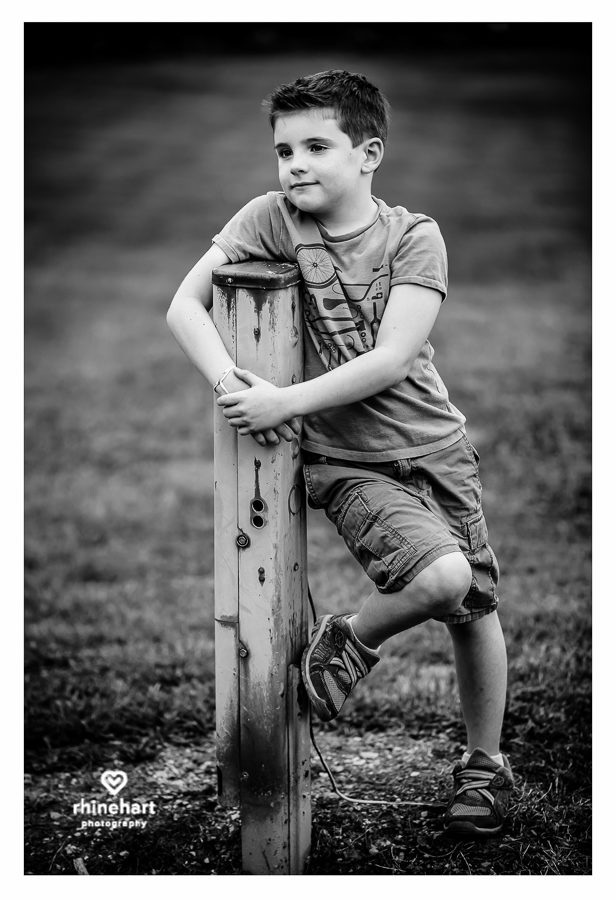 The wires and look of it seemed electrical to me, so I suggested he sit instead.  He started making funny faces to try and make me laugh.  He succeeded. 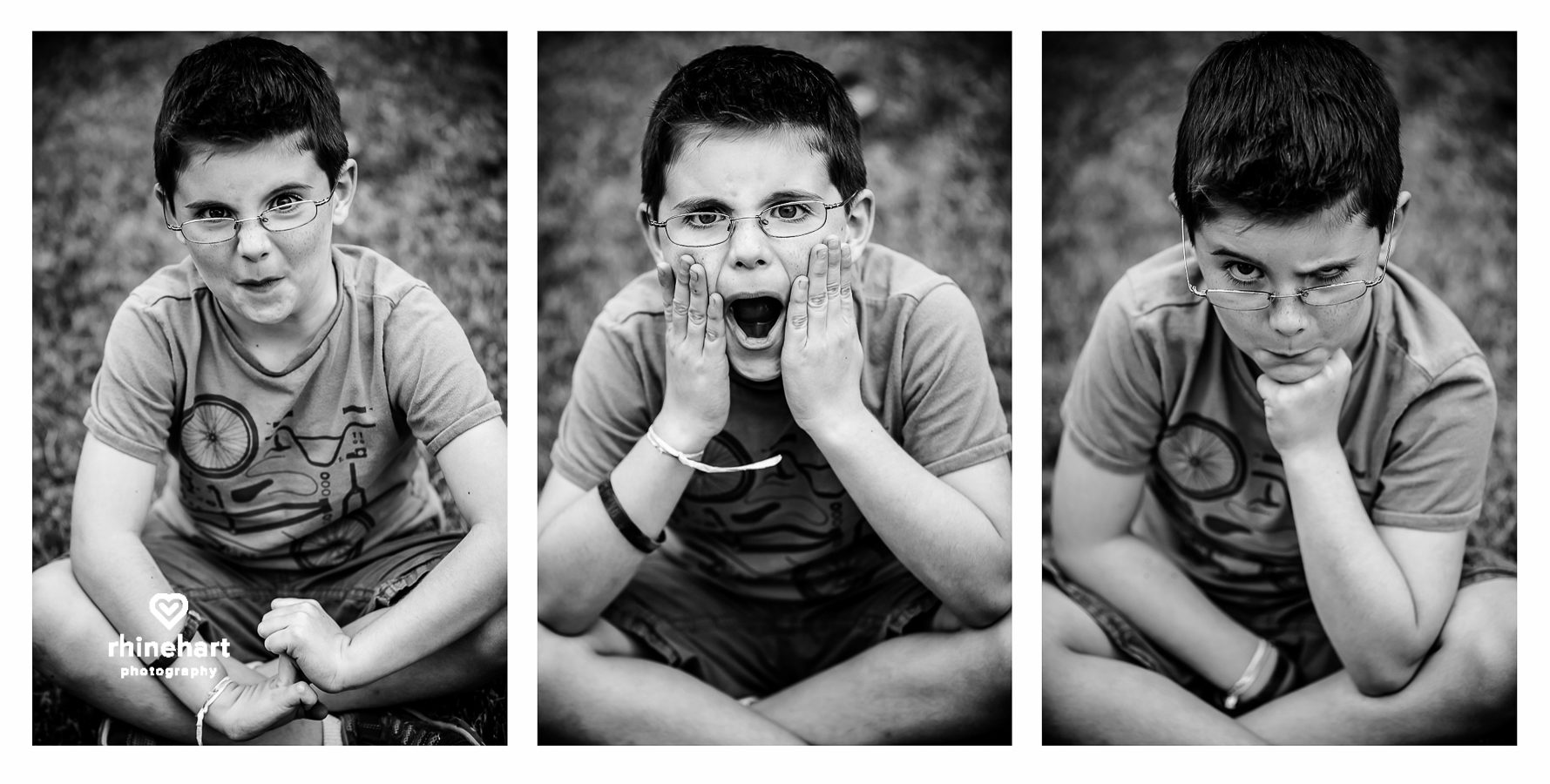 He is wearing one is his favorite t-shirts.  We ride bikes together as a family and Danny wants to know how *everything* works.
He thinks about building, history and in general “why things work the way they do” most of the time.
His glasses are bent– they are in their normal state.  We take them in to the optometrist for adjustments if they get uncomfortable, but if not, we let it go.   Danny insists on wire frames, even though the RayBan style is more practical. 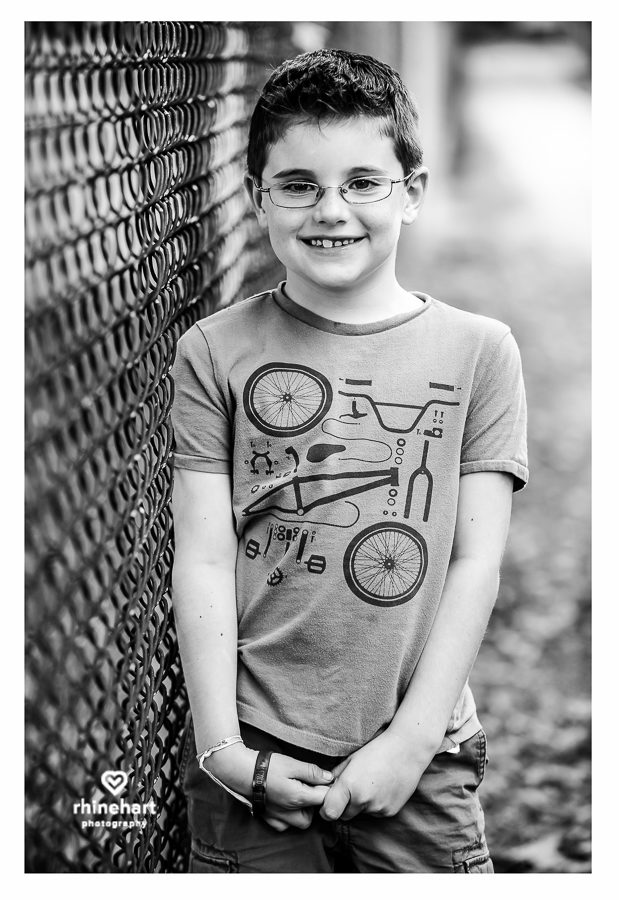 Danny: Woah!!!  I love this sign!  It makes you think about what used to be here before things were the way they are.  Like when do you think they used this?  Why don’t they use it now?  I know that it says Coca Cola.  That is still popular.  Look at this thing!!!  It is an actual piece of history!!!!!!  Wow. 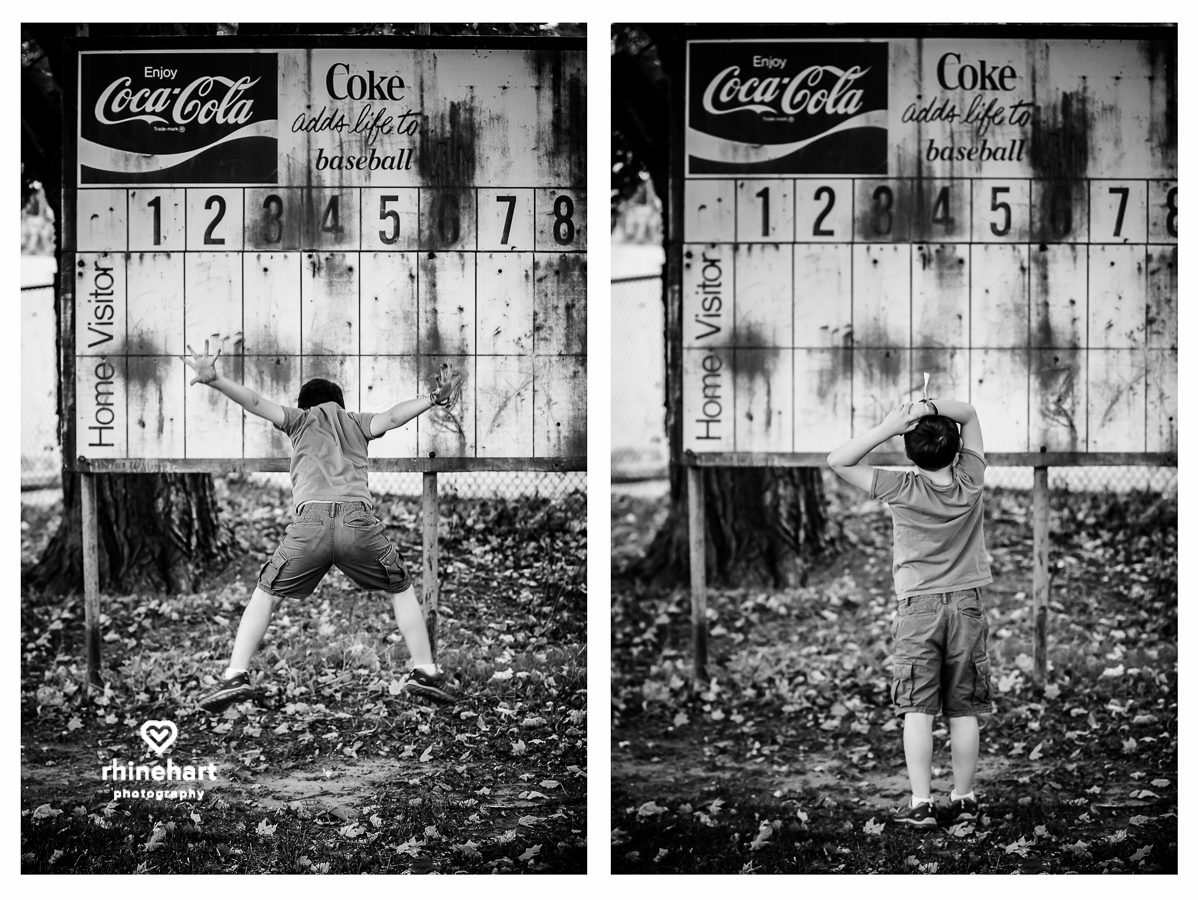 The funny thing is that my husband, Kris used to play little league in that field when he was Danny’s age and the score was written on that scoreboard! 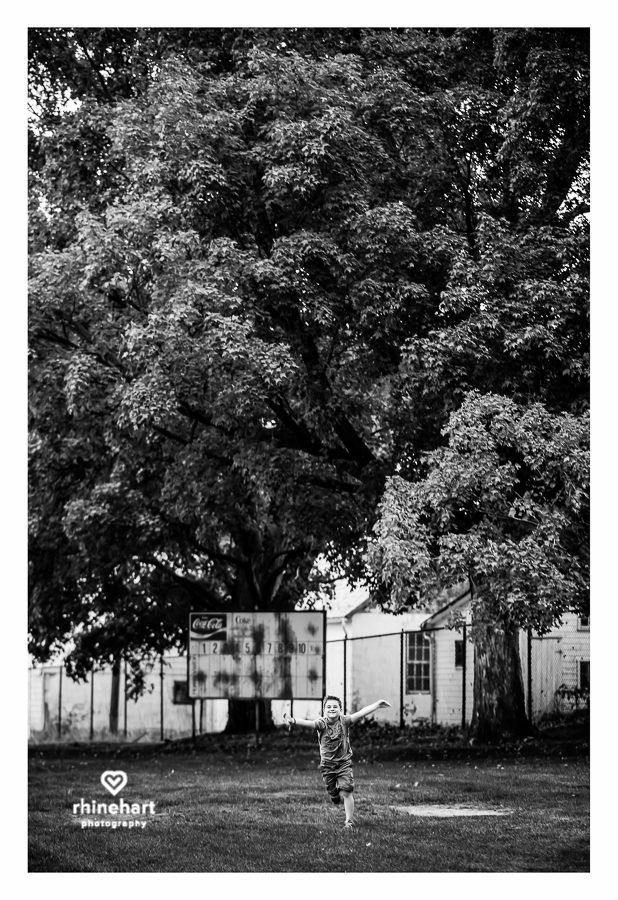 Danny: Hmmmmm I wonder what this is.  It looks like some sort of bridge-ish structure.  Like maybe there was water here a long long time ago, or yesterday. 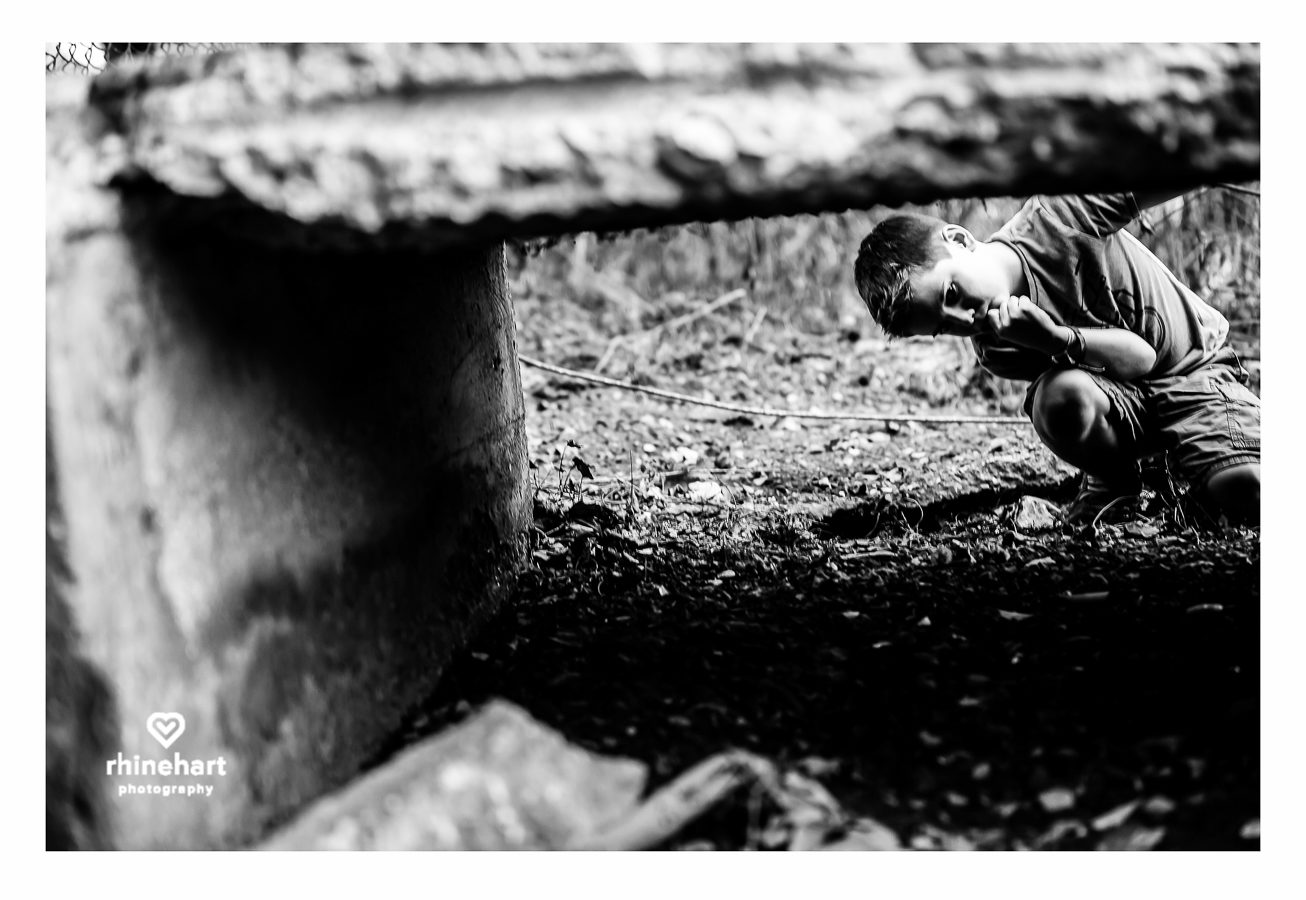 Danny: Ooooo look!  A cricket!  You need to be careful with these.  I know, I’ve injured one before, accidentally, which is really sad.  So, um yeah, I’m super careful now.  Look how cute he is. 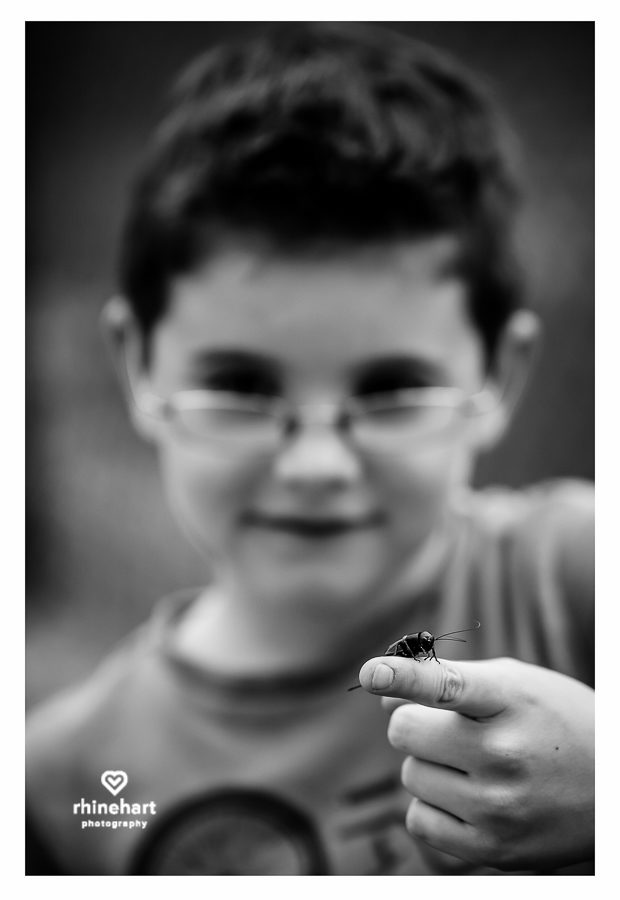 Me: Danny I need you to focus
Danny: Ok 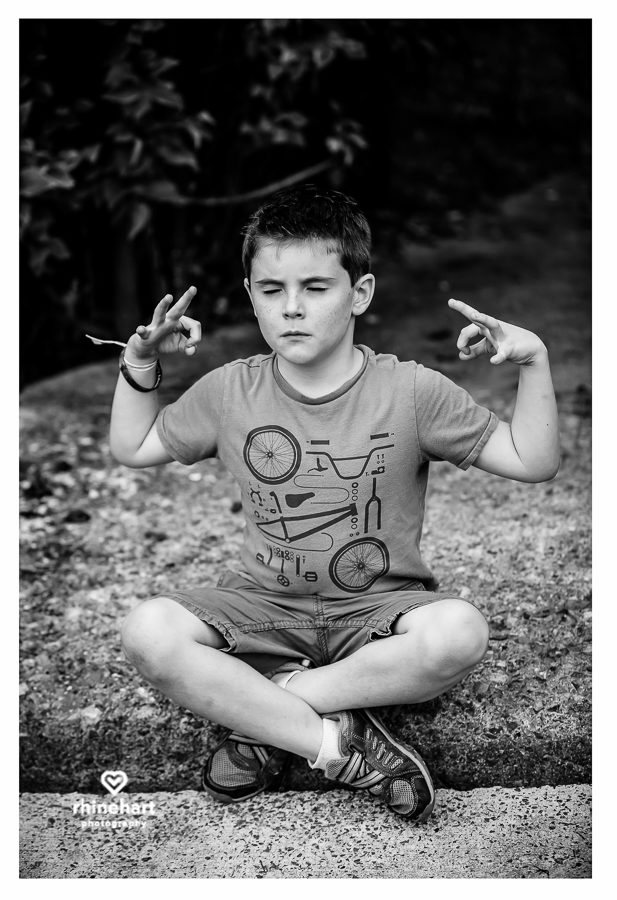 Me: I love all of these candid photos of Danny in Danny World, they are perfect, but I kind of also would like one of you smiling and looking at me.

From the messy hair to the freckles and big eyes, even the one “grown-up” tooth he has, I love this little guy! 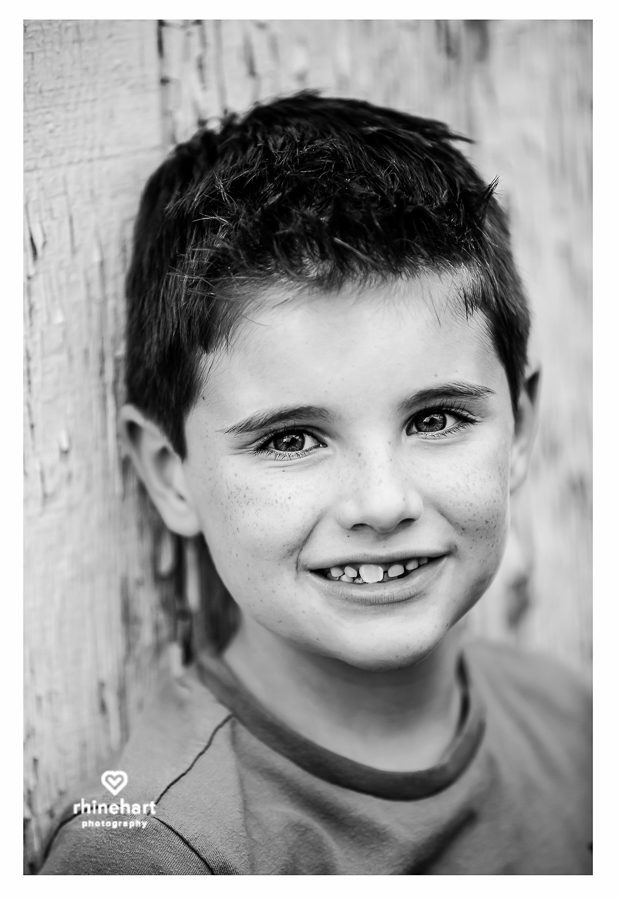 Danny: This was fun!  See, aren’t you glad you followed me to the field?  I told ya it would be good. 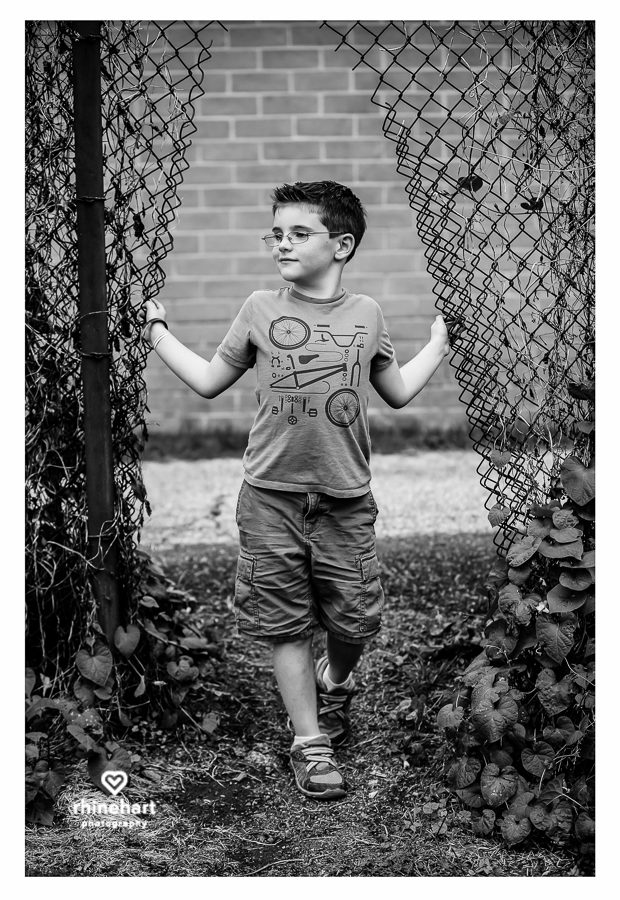 Kiersten.
Kiersten was much more reluctant to participate.  It isn’t that she doesn’t like photos, she is just more of a work-now play-later sort.  She has homework.
She loves fashion and has a simple and unique style of her own.  Not that this photo particularly shows it off, it is just what she happened to be wearing.  Since this is in black and white you can’t tell, but everything she is wearing is in a pink and gray palette.  From her pink T to gray jeans to pink and gray dotted shoes and nails and even pink & gray rubber bands.  The braces are new. 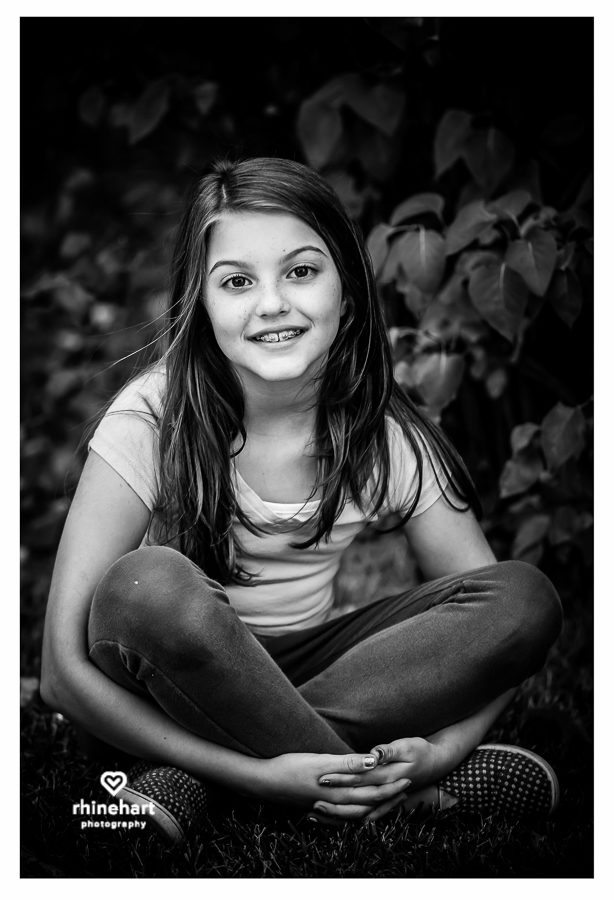 She is more of an introvert, she only lets people in so far.  Though the way the wind is blowing her hair to the side almost hints at there being a lot more below the surface.  This photo gives a glimpse to that mysterious, hidden side to her. 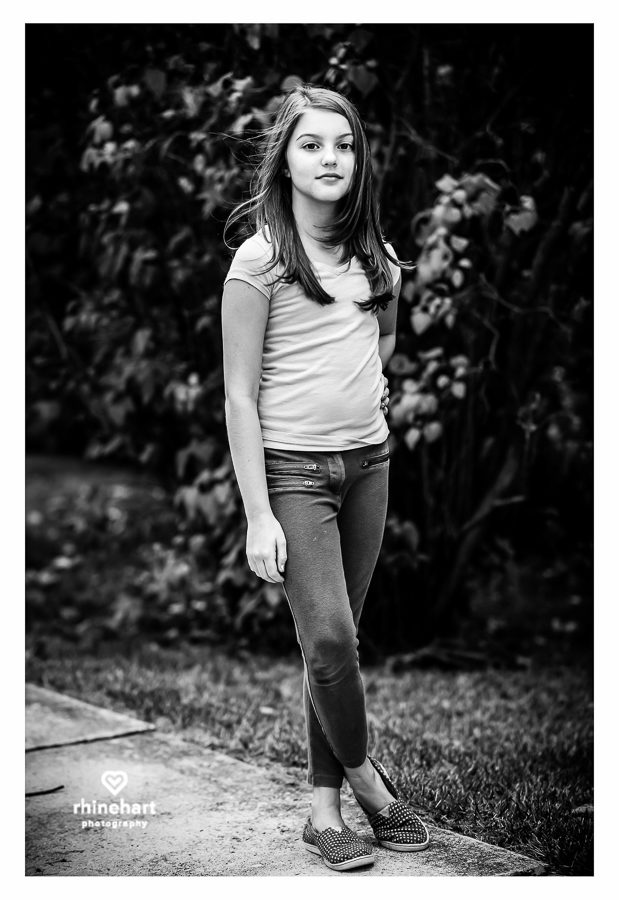 Once you get to know her you realize, she can be crazy. 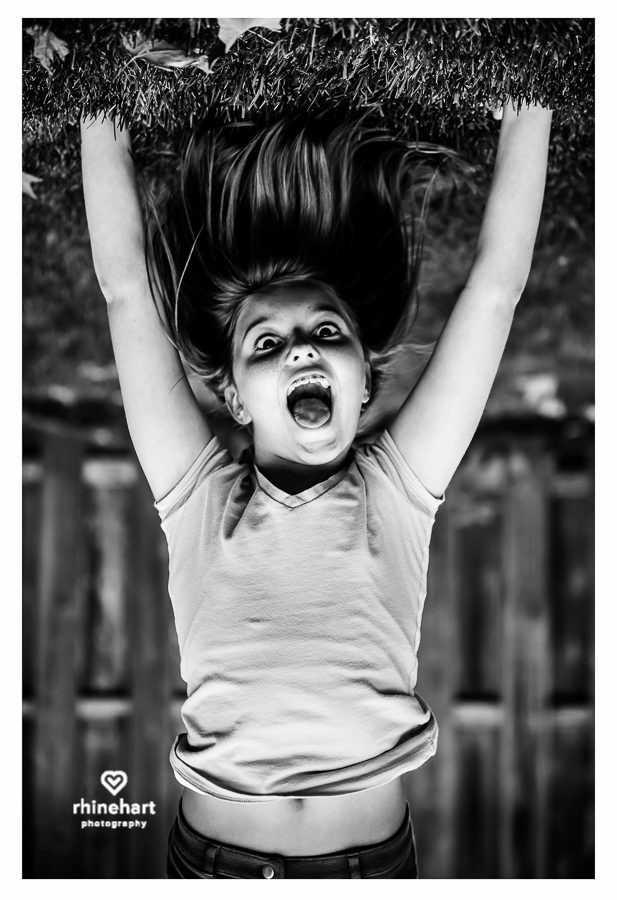 and has a fantastic sense of humor… 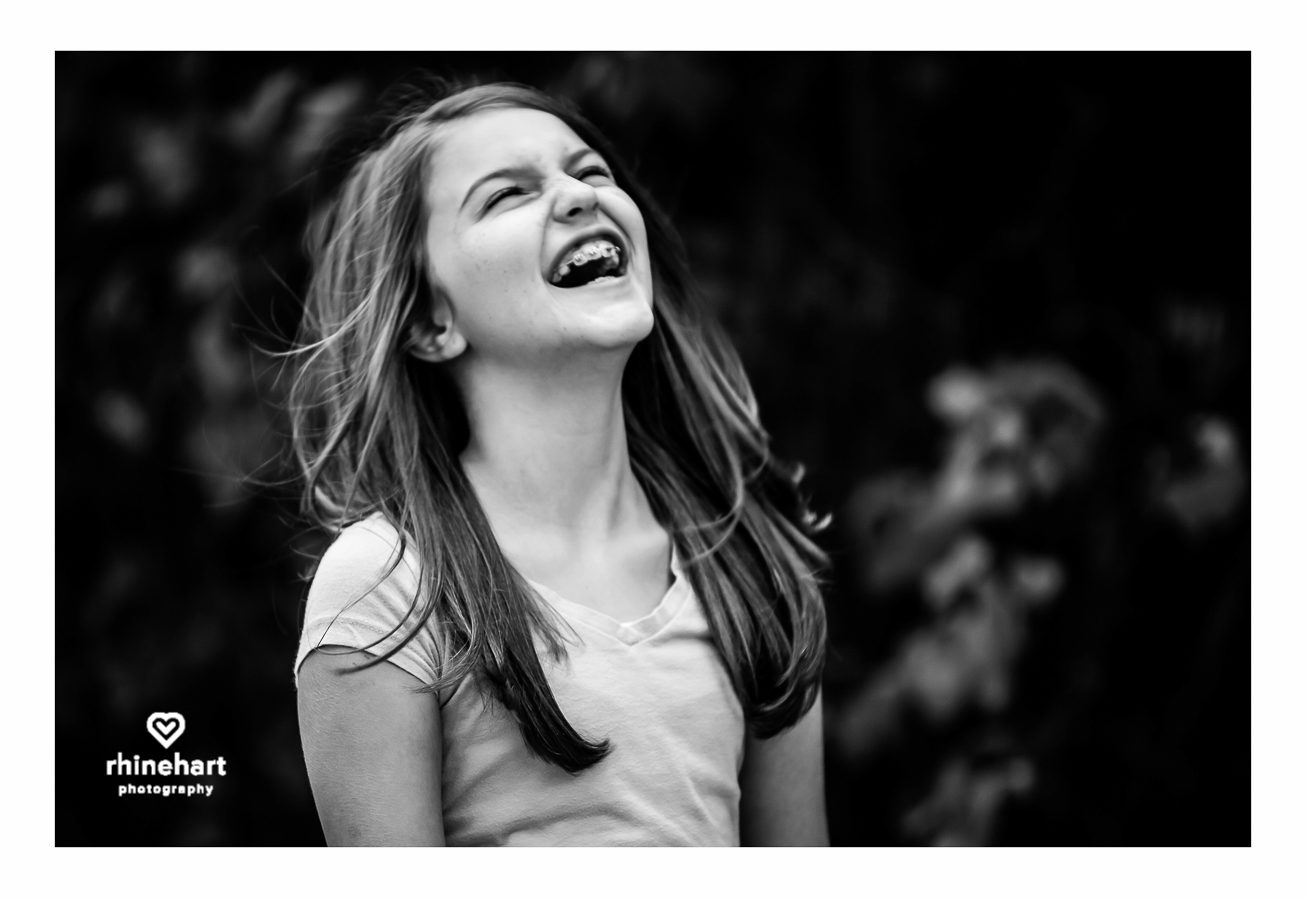 and a incredibly strong appreciation for nature and beauty…

She also loves animals.  She is so interested in animals that she reads the animal encyclopedias we bought her for Christmas for *fun*.
She creates “Animal Trading Cards” with her friends by taping animal pictures from National Geographic or sticking animal stickers onto rectangular bits of paper with hand-written facts about each pictured animal.
She plays Quiz-up, an iphone app that tests trivia knowledge.  She has memorized so much, that she has ranked in the top 3 in Pennsylvania for animal trivia.  This is not a child’s game.
Sometimes she’ll correct me, like earlier this week…

Me: Sharks eat people.
Kiersten: Actually, sharks eat billions of fish every year including even other sharks and on average only like 15 people, a year.  They don’t prefer people.  If they did they’d eat more of them.  What???  I’m just saying!!!  Well, it’s not like they go out of their way to attack people or something.  It’s not like that.  People are not a sharks prey.  Fish are. 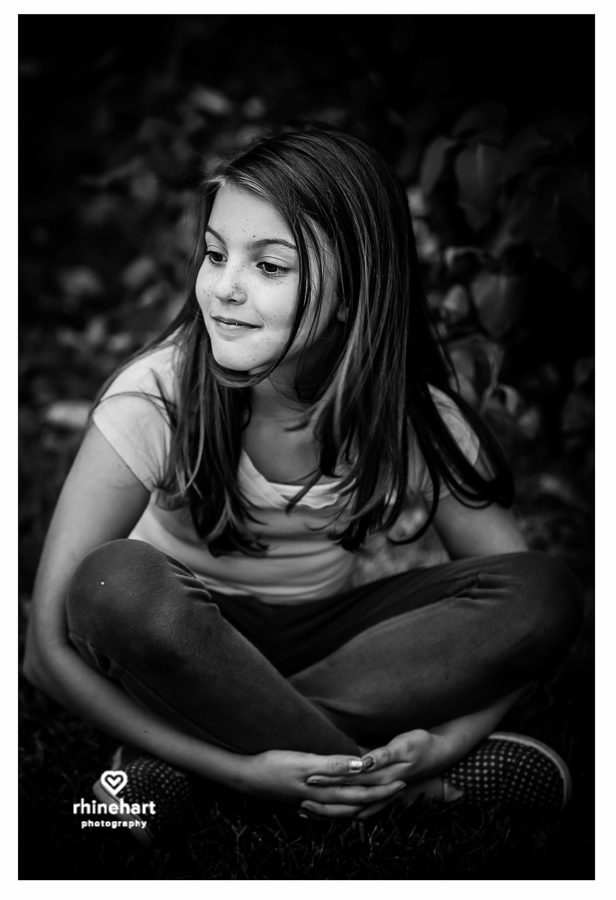 I wanted to get that smiling looking at the camera shot of her, too… I can’t believe how grown up she looks! 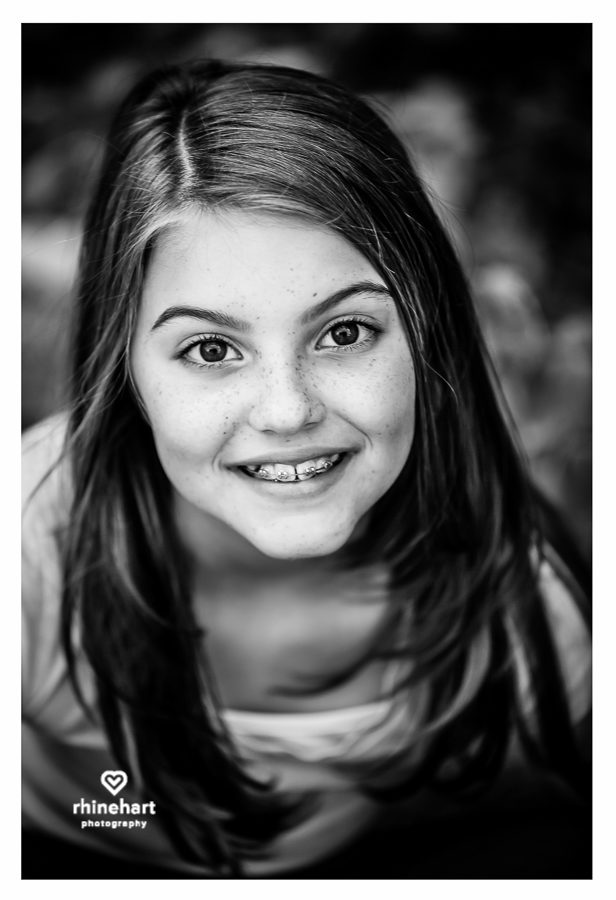 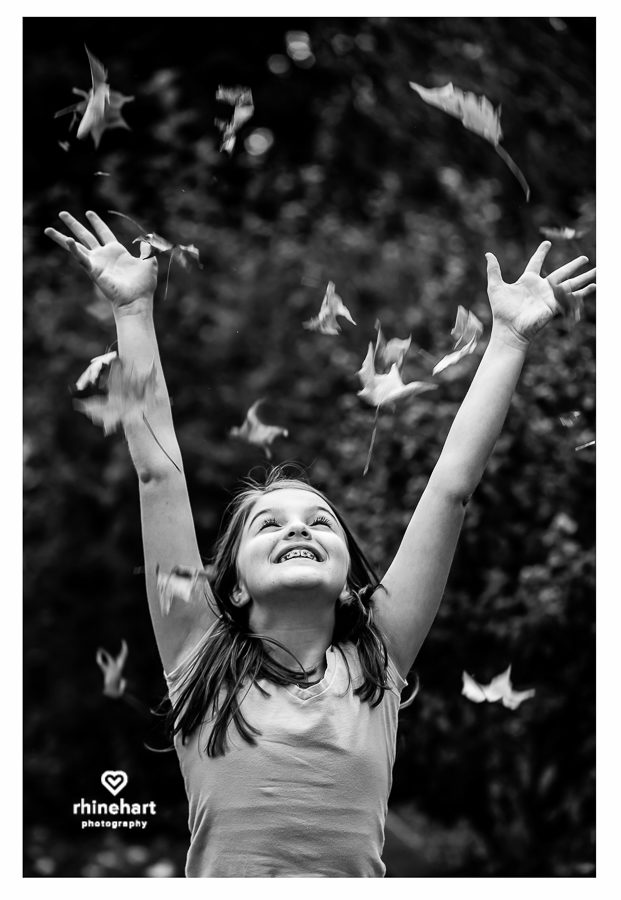