Nashville!!!!  Color, creativity, architecture and a super sweet couple and their love story… without a *shadow* of a doubt, these two are meant to be together 😉 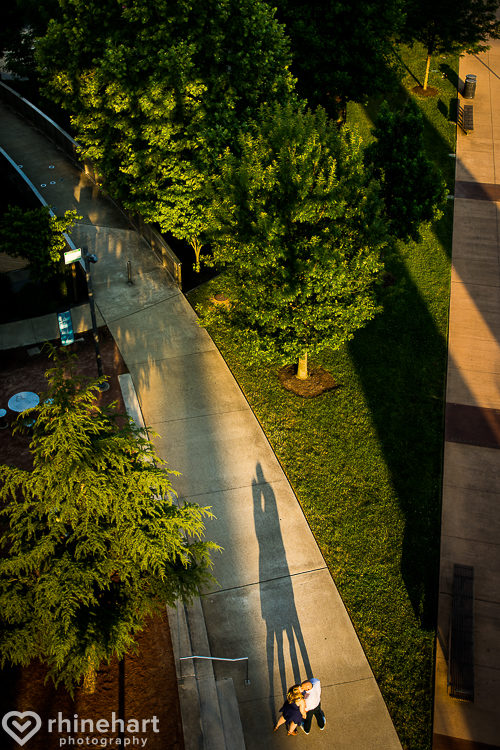 I was first contacted by Justin in a top-secret sort of way before he proposed to Felicia!  He knew that I booked up super quickly and that Felicia had her heart set on having me capture their wedding and engagement photos…
Felicia shared, “I have been following your blog for such a long time and love how your photographs are so creative and unique– you capture a couples’ interests and personalities, and every single person’s photos are completely different!”
She continued, “I knew if I ever got married, I wanted you to photograph it.  So, when Justin and I started talking about getting engaged, I mentioned that we would need a fairly long engagement if we wanted to work with you, haha.  He surprised me by contacting you, even before he even popped the question!”
Haha, Justin did contact me and mentioned wanting a Spring wedding, but being totally flexible with the date aside from that which basically guaranteed us being able to work together.  I was so incredibly excited to photograph their Nashville engagement.  It seriously was a highlight of my summer!  I’d totally do it all over again. 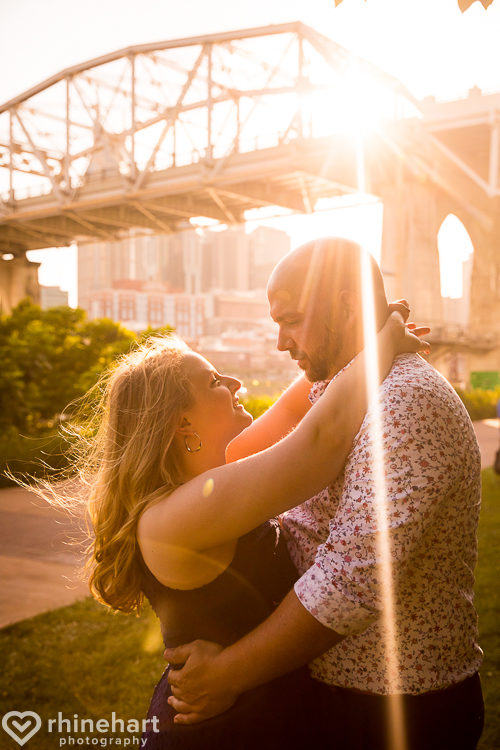 I am located in Central Pennsylvania, but travel all over the USA for photography– DC and NYC are fairly common for me, but visiting a new place like Nashville was super exciting.  For one, I absolutely love architecture and there was so much for me to play with! 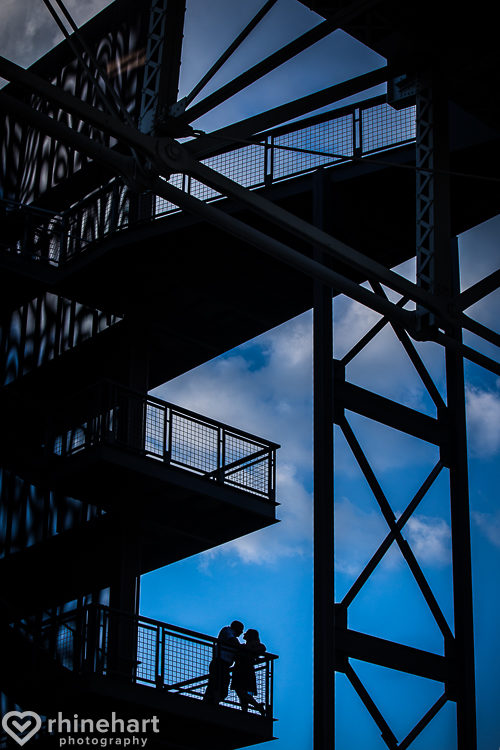 Felicia shared, “Nashville is where we met so we wanted to capture that.  We wanted to start in Cumberland Park and cross the Pedestrian Bridge because it showed off the view of the city and would take us into downtown.  It also gave a more natural feel, so we could have both the city and nature incorporated into our photos.”
I think this photo captures both the trees and park space along with the more modern architecture and walkways.  I love how the lighting is just perfect her, almost spotlighting Felicia and Justin– I love to play with perspective, too, so this was a really fun one! 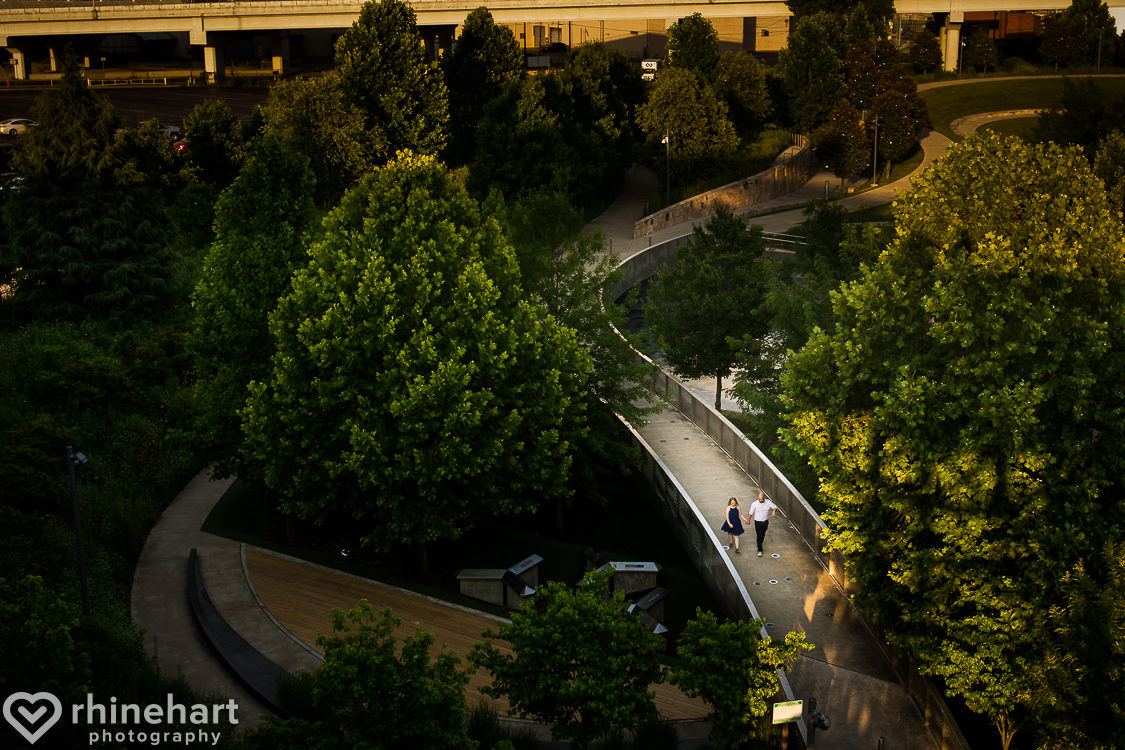 Felicia shared, “What I love most about Justin is that he makes me laugh and smile all the time.  We have so much fun going out but we can also have just as much fun staying in.” 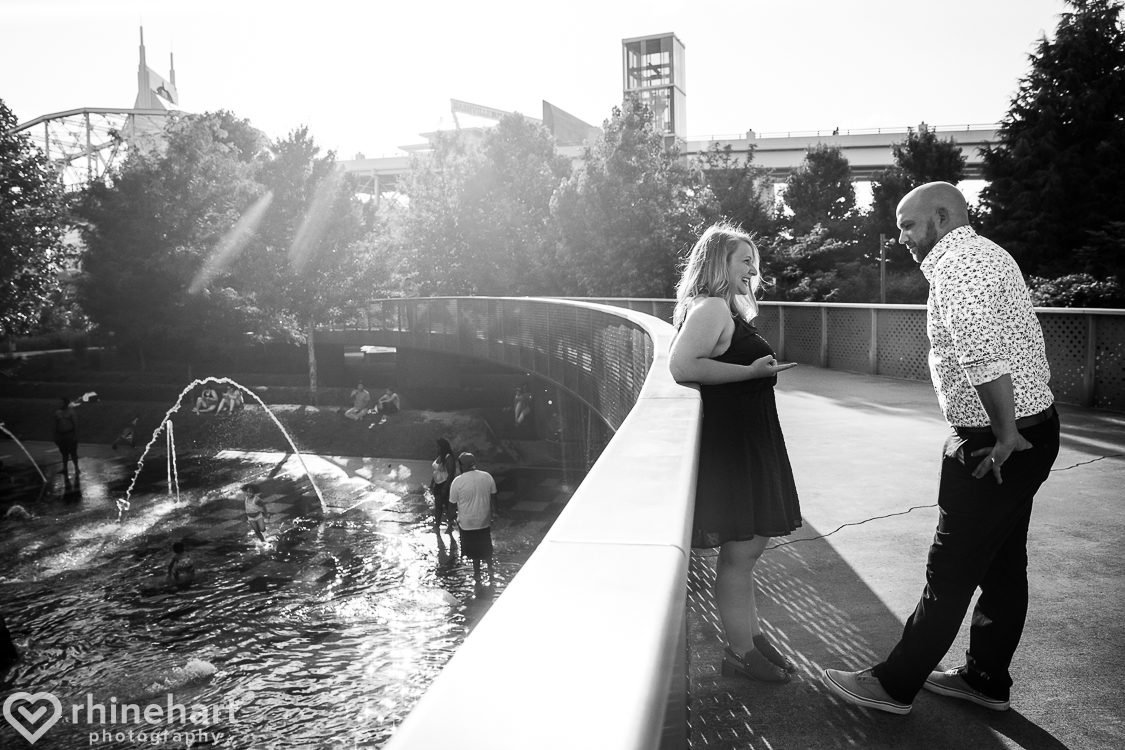 She continued, “Something he likes to do is act like he is not interested and then surprise me and be super romantic out of nowhere.”
Yes, I witnessed this phenomenon several times during this engagement session, lol!  (See the photo above and below.) 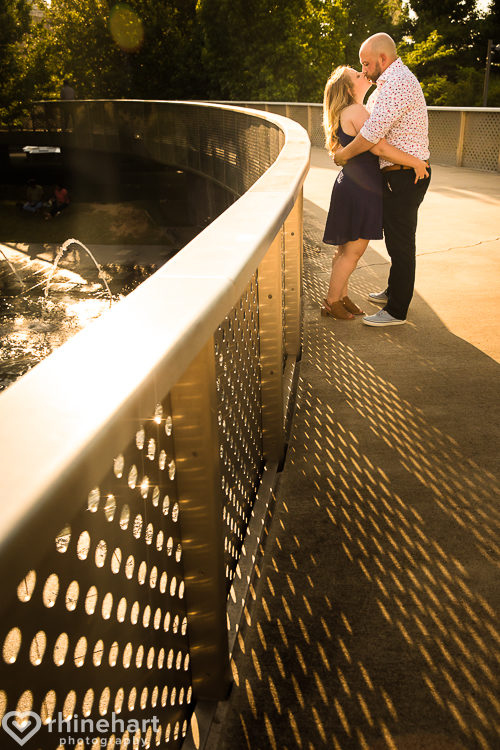 When we got to downtown, I was totally blown away!  There was so much energy– honey-tonks and rooftop bars lining Broadway.
If you look very closely you can see Felicia and Justin…  it’s like Where’s Waldo, haha,  I used a tilt-shift technique to make them look even more in “miniature” 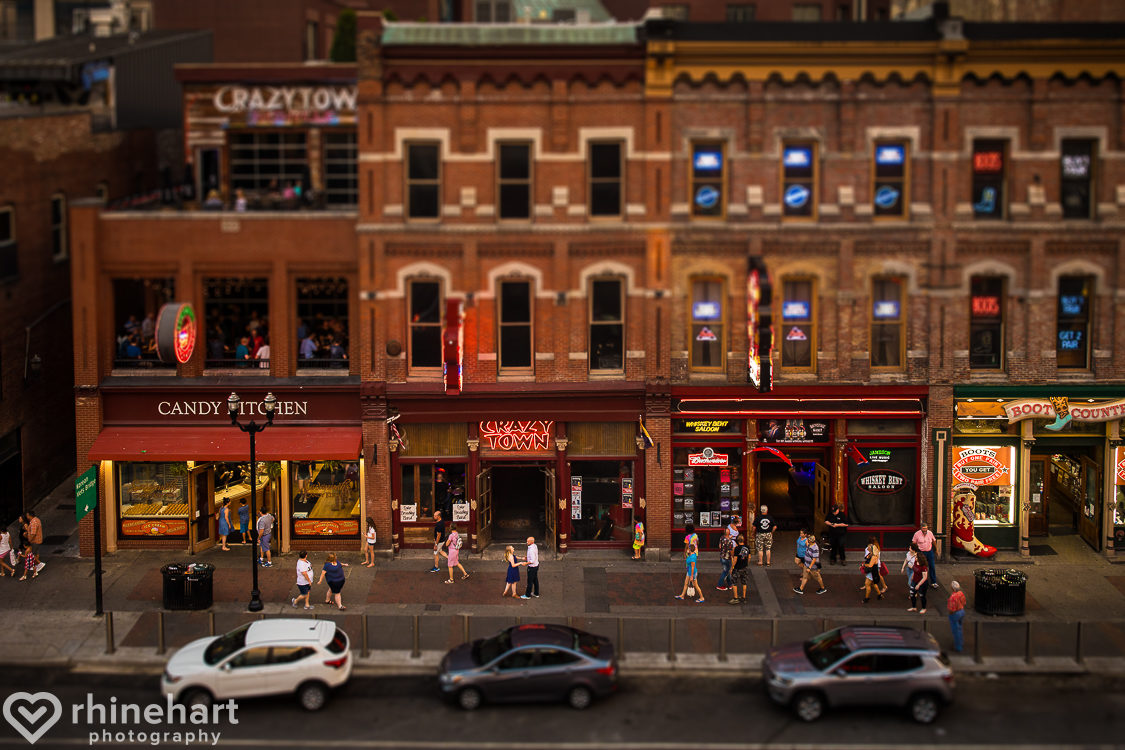 As they walked down 4th avenue together I couldn’t help but notice…  They were following a “one way” sign to “Paradise Park” (the place they met) and there was another couple, quite a bit older, also a cute blonde with a tall bearded man holding hands just a little bit in front of them, walking in the same direction!  I couldn’t help but this about their future…
I adjusted my shutter speed to capture the movement and both of the couples and all of the energy that is Broadway… 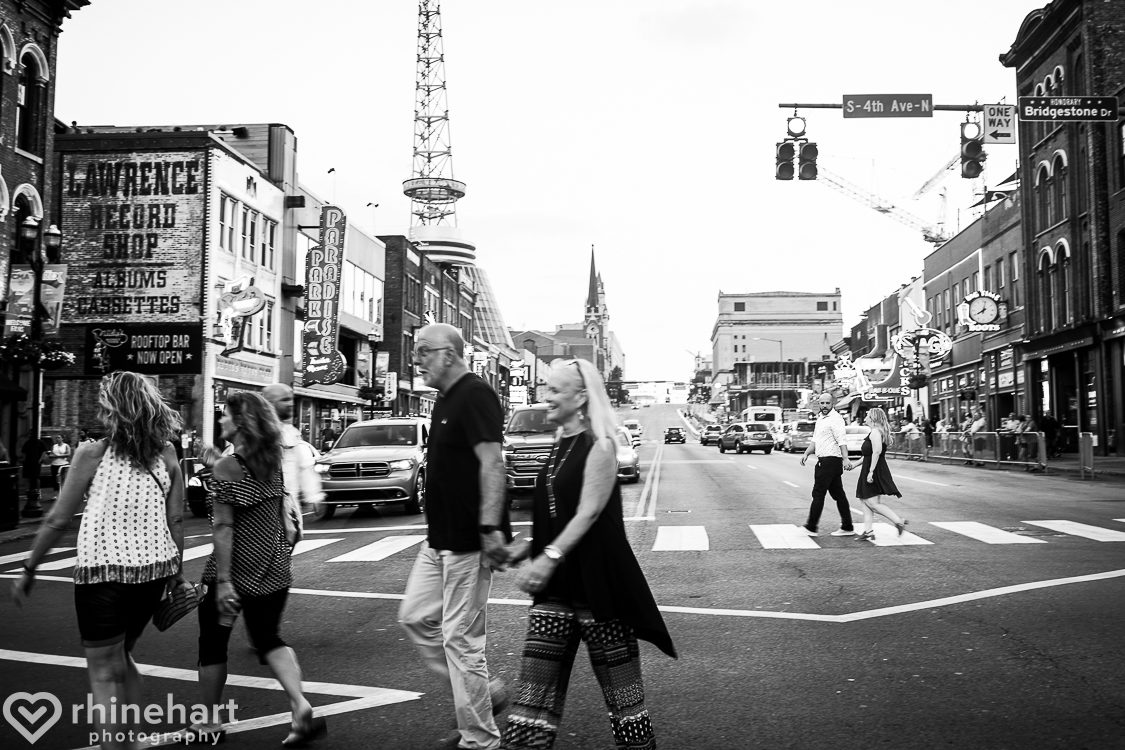 Speaking of rooftop bars, we stopped at Jason Aldean’s, which had recently opened and was pretty darn amazing.  The sky was just incredible when they were up there and I was able to silhouette them against it.  Bottoms up!  😉 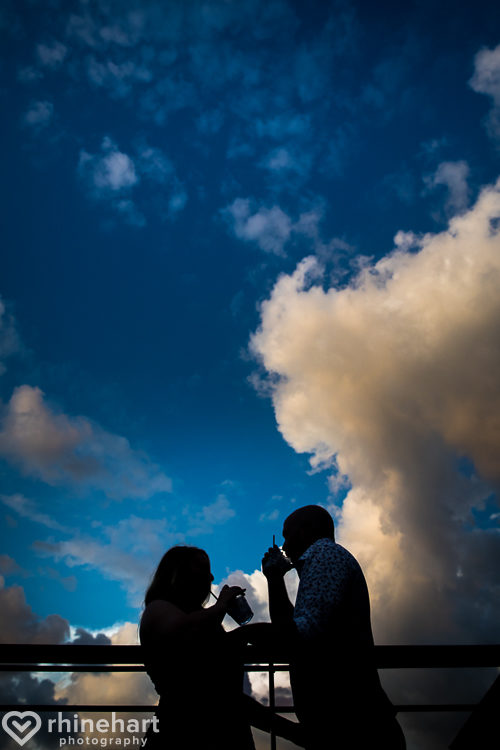 Justin shared, “I love Felicia because she is intelligent and challenges me every day. We have similar personalities and like to do the same types of activities.  She was the quiet girl in the bar full of loud people which drew me to her because she was different. It didn’t hurt she is super pretty.” 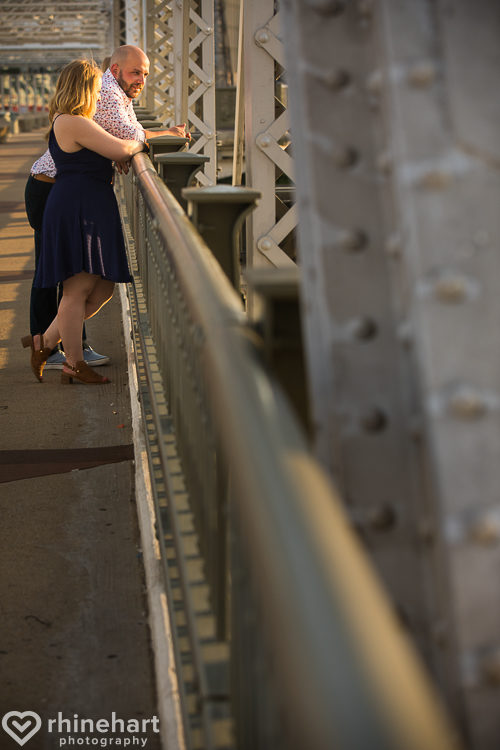 Haaa I just thought this one was fun– man/woman all the colors and reflections.  Slightly American Gothic…

I loved the contrast, light and lines in this space– it also literally says Nashville, which I thought was kind of cool. 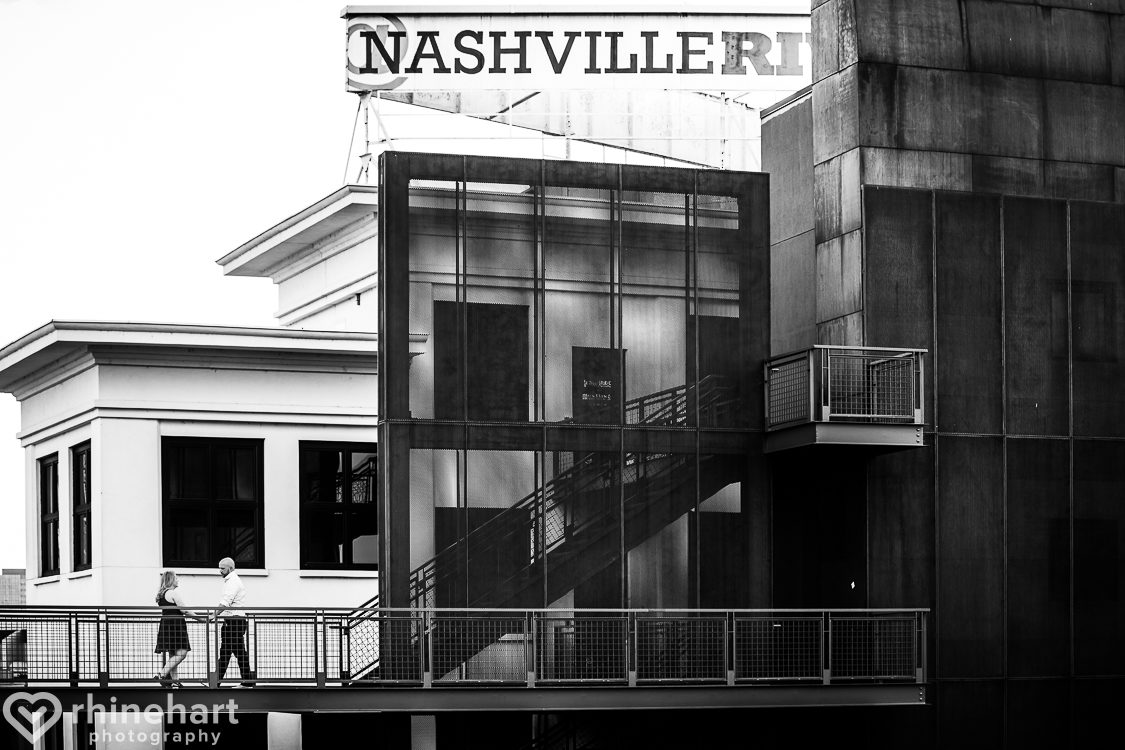 Two into one… my eye stars at the “real” Felicia and Justin, and cycles around to the clear reflection and then the upside down blurry one, where they almost morph in to one person.  🙂 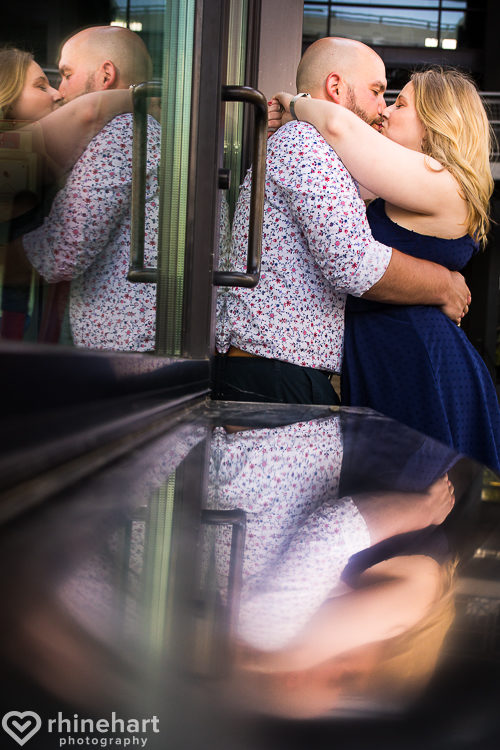 Here Justin is bringing out his inner Don Juan again, slow dancing with Felicia in the park.  She’s totally game. 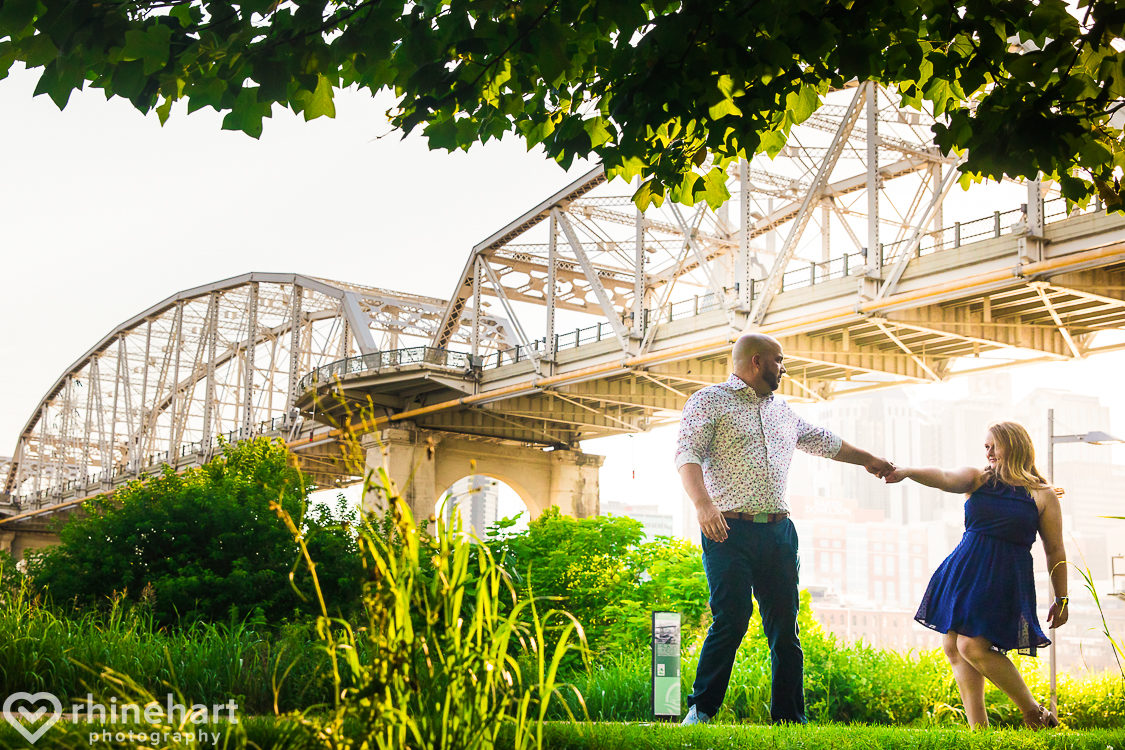 Felicia reminisced, “Ah the weekend of our engagement we went to Gaitlinburg and rented a cabin in the mountains.  He had planned a surprise helicopter ride over the mountains for us, but the weather was too foggy to fly…”
I like the foggy look of this photo and the way Justin is looking at Felicia here 😉 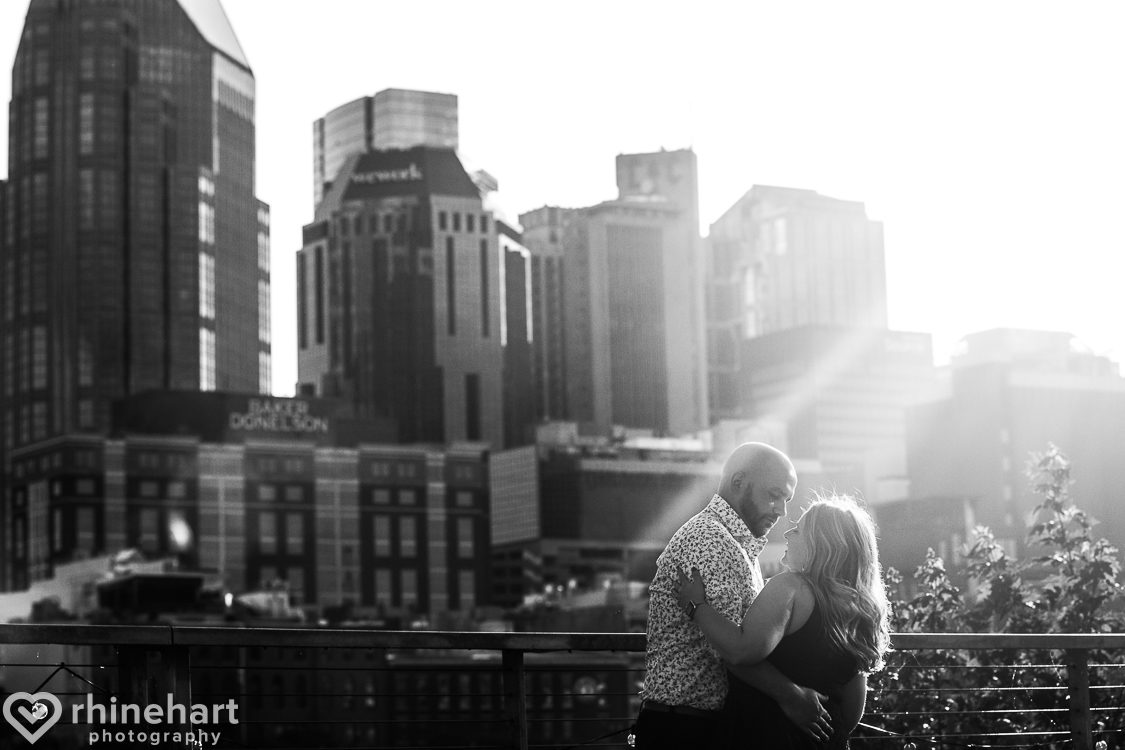 Felicia went on, “He had planned to take me to Dollywood following the helicopter ride and proposal, so he just took us there instead, moving the helicopter to Sunday.  But as we approached Dollywood, he started to get nervous about having my engagement ring in his pocket when we would be riding roller coasters!” 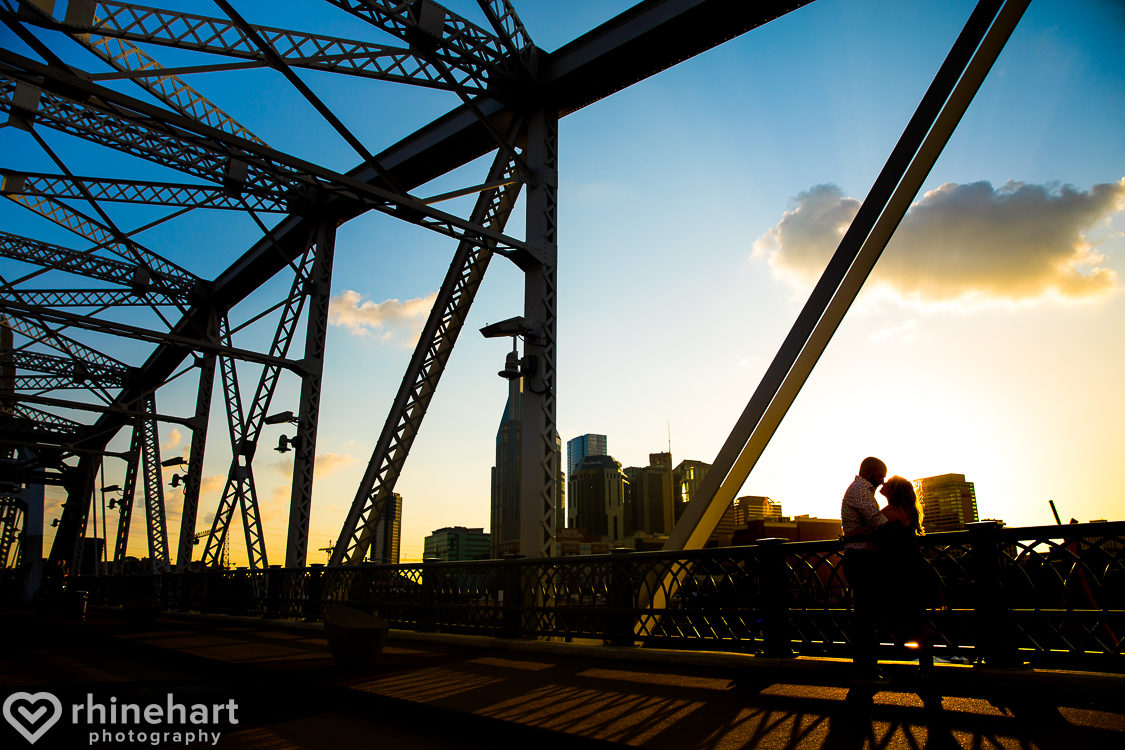 Justin shared, “I started out with, ‘Well it wasn’t supposed to go this way…’ and proposed to her in the parking lot of Dollywood, haha!  It didn’t’ seem to matter all that much to her.” 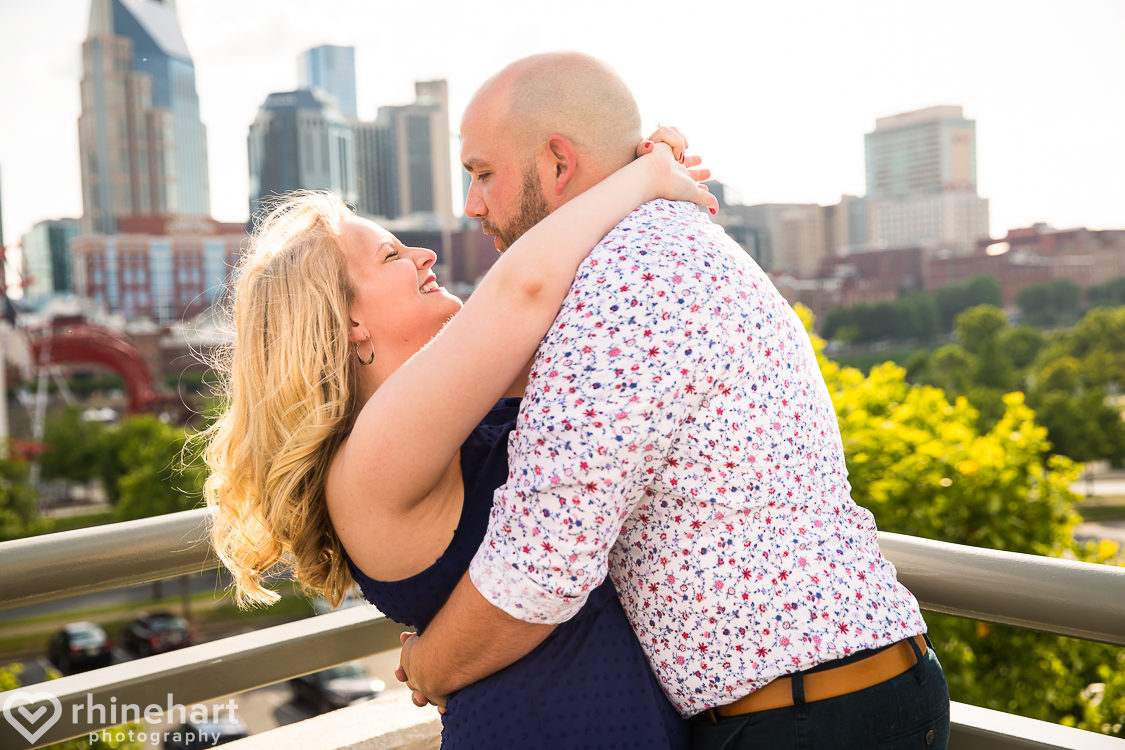 As the sun began to sink low in the horizon, I noticed these long, golden shadows forming on the pavement… 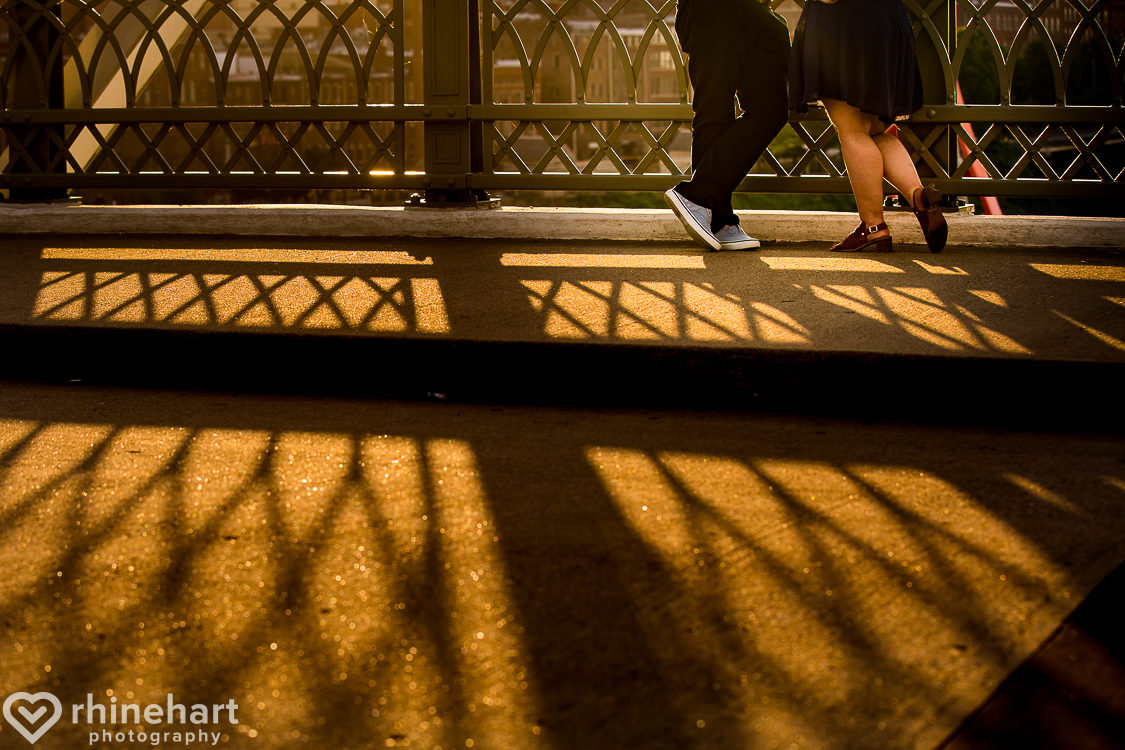 The sunset was kind of perfect… 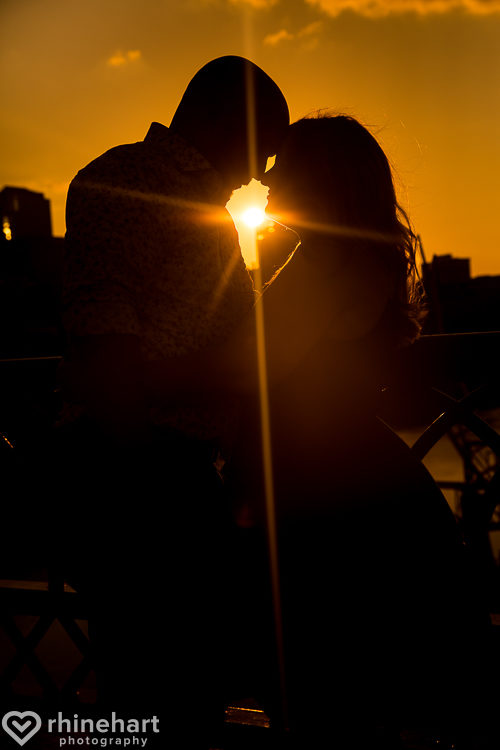 Felicia shared, “When we explored downtown, we just wanted it to feel like a night out on the town and it did!”
The town was literally illuminated after dark!  I brought my little assistant along (what an amazing first job!) and she held lights for me to make these short of short possible… 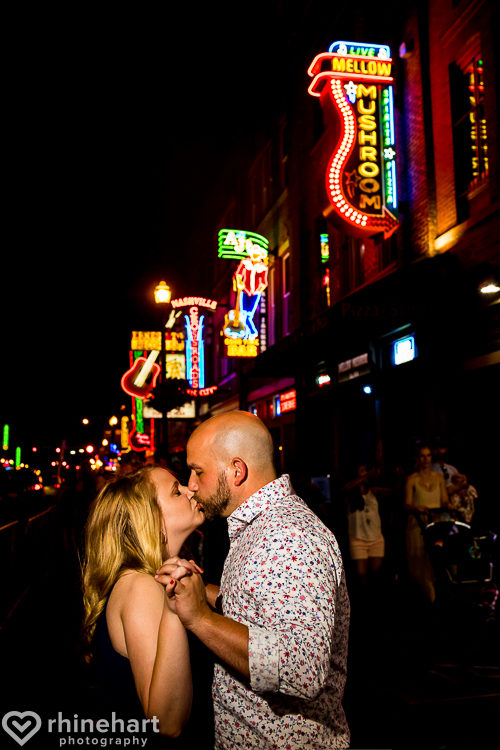 Yes, this is their first date location…
Felicia said “We wanted to capture where we met, Paradise Park.  We met there when I was visiting for a long weekend with friends.  We talked for a year and then I came back down a year later for CMA fest.  We then started a long distance relationship, and eventually  I moved to Nashville after 2 years.   The week after we took our engagement pictures, we found out that Paradise Park was closing.  We are so glad you were able to capture this for us!” 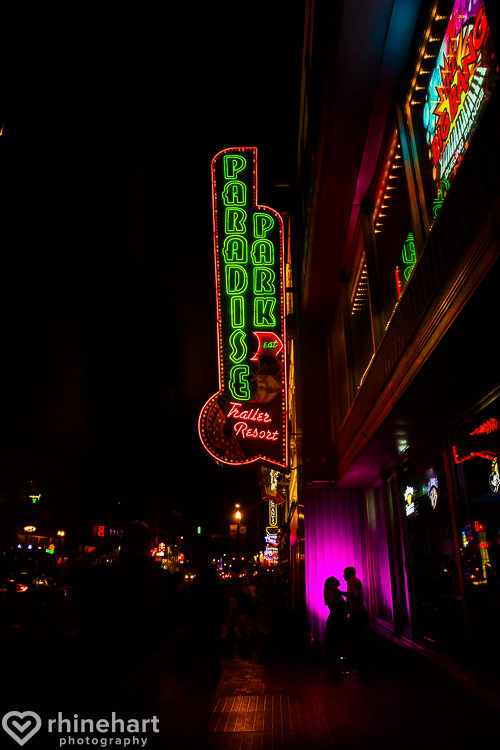 Felicia and Justin, thank you so much for bringing me all the way to Nashville to photograph your engagement!  I had so much fun with the two of you and will not forget this trip!  I hope that these photos are just the sort of creative, unique photos that will capture your love for each other and Nashville!
I’m super excited to hear your thoughts and anyone else’s who has enjoyed this blog.  Please feel free to share this link on social media or leave comments below :).