Sailboats, ice cream, cobblestone streets, Salsa dancing, a night out on the town in Annapolis… 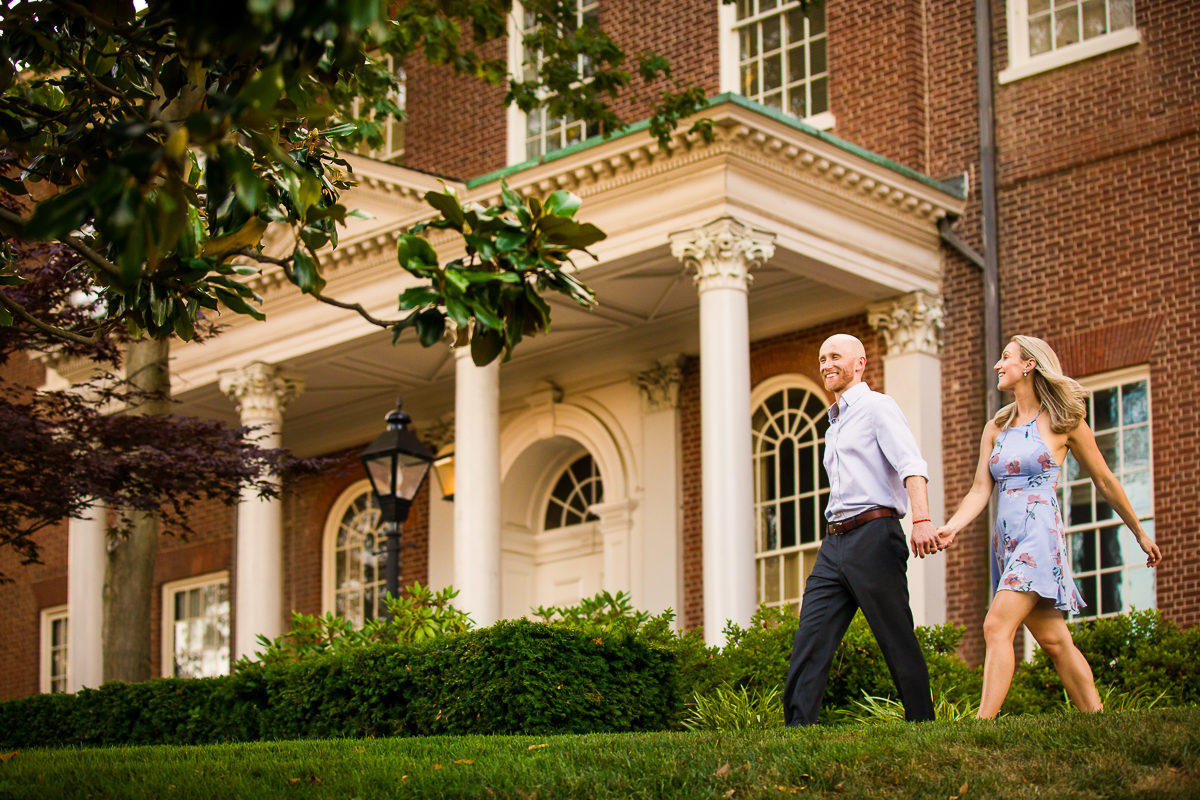 Tom shared, “One of many reasons we chose you was because Sara had seen firsthand how talented you are at Rachel & Tommy’s Baltimore wedding at the Four Seasons. As Rachel’s Maid of Honor, not only did she appreciate your easygoing and creative direction (particularly when organizing a large bridal party), she really loved the final product — your photos from Rachel’s and Tommy’s wedding were gorgeous. The black and white photo of them under the umbrella has always stayed with her.”
Sara added, “Tom is an artist and he appreciated some of the artistic, creative photos on your website gallery; he thought you could create some really unique shots of us beyond typical cookie-cutter wedding photos. We’re both interested in more candid photos to really capture the joy of the day, but want a couple posed photos, too. We talked it over and decided a photographer was a good vendor on which to splurge a bit, because photos are one of the most lasting things you want for on your wedding day. We figured it was worth it to work with the best!”
It is one of the best compliments I can receive when a former bridesmaid books me for her wedding day based on her first-hand experience!  Thank you for your confidence in me, Sara and Tom. Yes, I love to get creative, more on that soon *and* here is a more “traditional” smile-and-look-at-the-camera type of shot, but I think your personalities and joy really come across!

Early on into their relationship, Sara was in a romantic mood and told Tom, without a hint of irony, “Your eyes are blue like the ocean.” She said it so seriously that Tom cracked up, not able to keep a straight face. It’s become an inside joke, with Sara often telling Tom his eyes are blue like the ocean to get him to laugh or smile.
I love this pic of them, how comfortable and happy they are here and wow– his eyes are so BLUE! 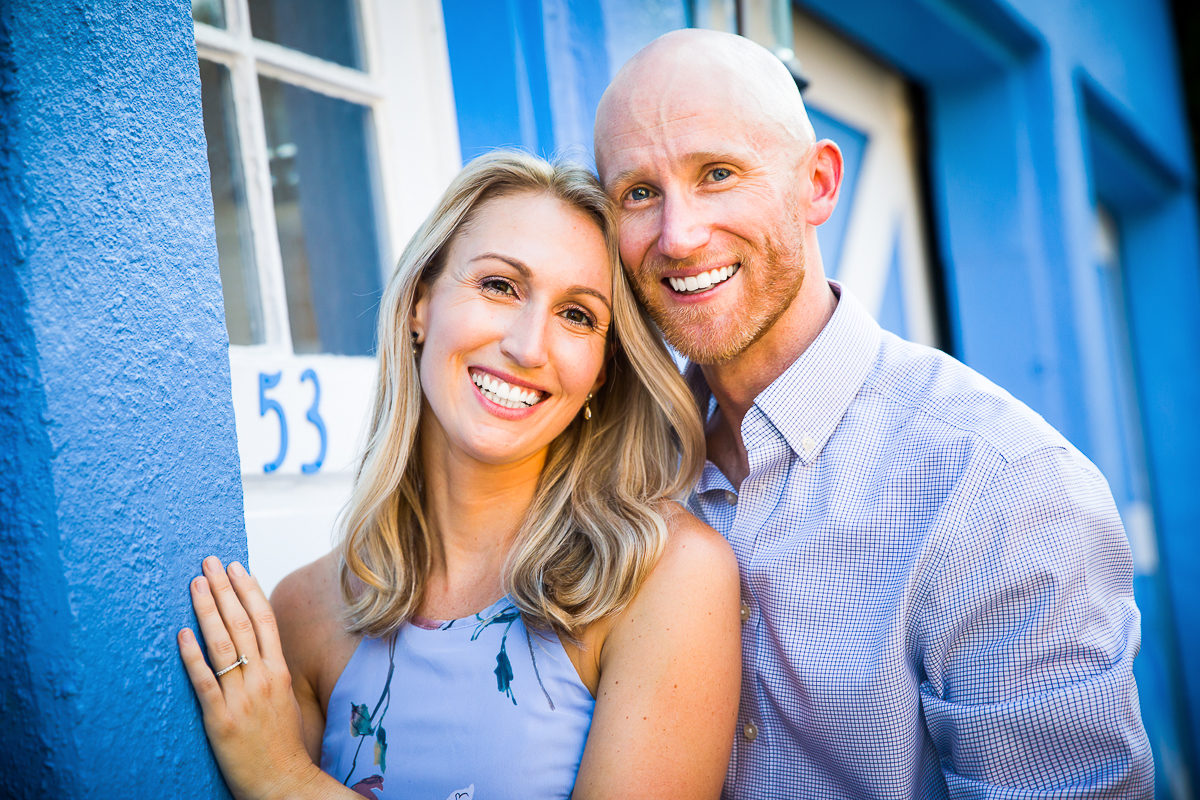 Sara explained, “Having our engagement photography session in Annapolis was appealing for a couple of reasons 1) it’s relevant to our Maryland roots and love for our state.  2) It’s also on the water, which is our favorite place to be.”
Sara leads the way keen on exploring all the colorful alleyways and cute city streets.  I was taken by the light, golden and intense, bringing out the most vibrant colors.  It fit this fun, playful couple so well!

We turned the corner and came upon the cutest little mural, complete with wisteria vines and a bike with a basket filled with wine flowers and bread: 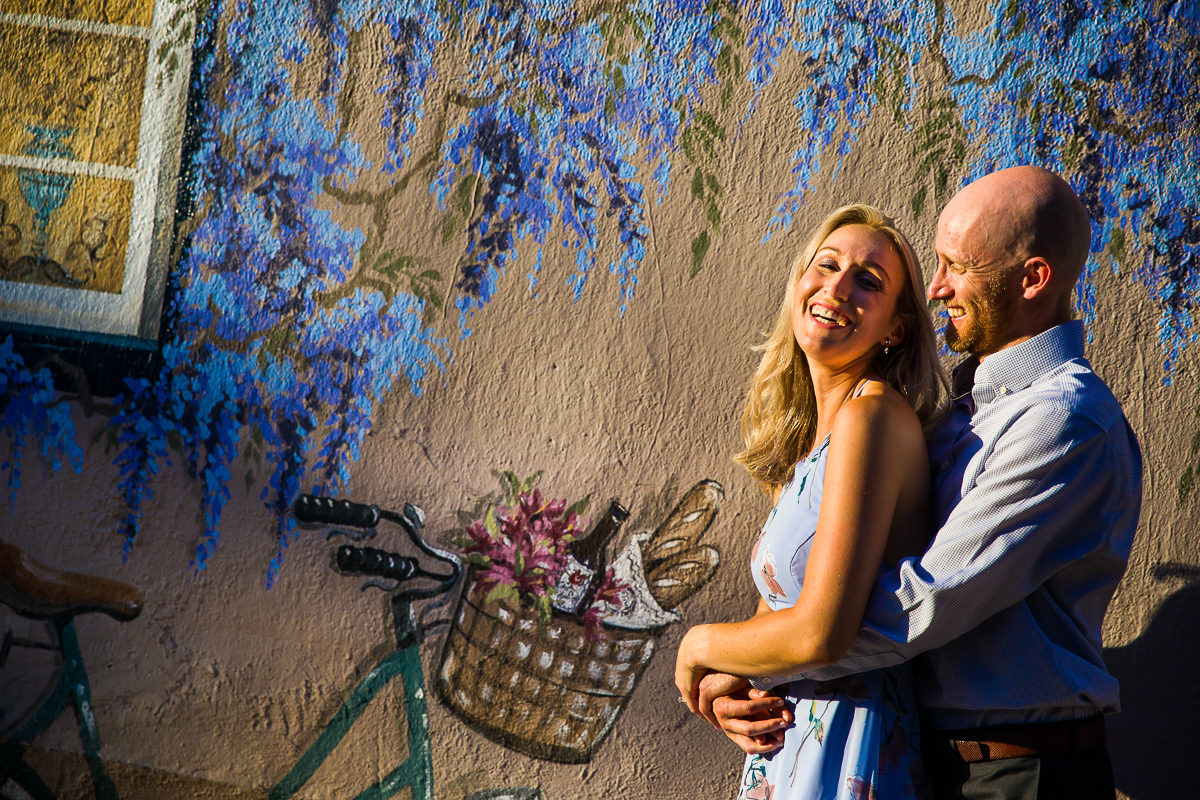 Sara laughed, “This is so fitting!  For a while, it seemed like Tom was running his own bike-flipping business — he would buy, fix up, and sell bikes so regularly. This is fitting to life with Tom as he is constantly tinkering with hobbies. At one point, he owned four different bikes! These days, he’s down to two bikes but there’s always room for the next project.”
As soon as we got to the mural, Tom was like, “Hang on, let me fix this a sec.” 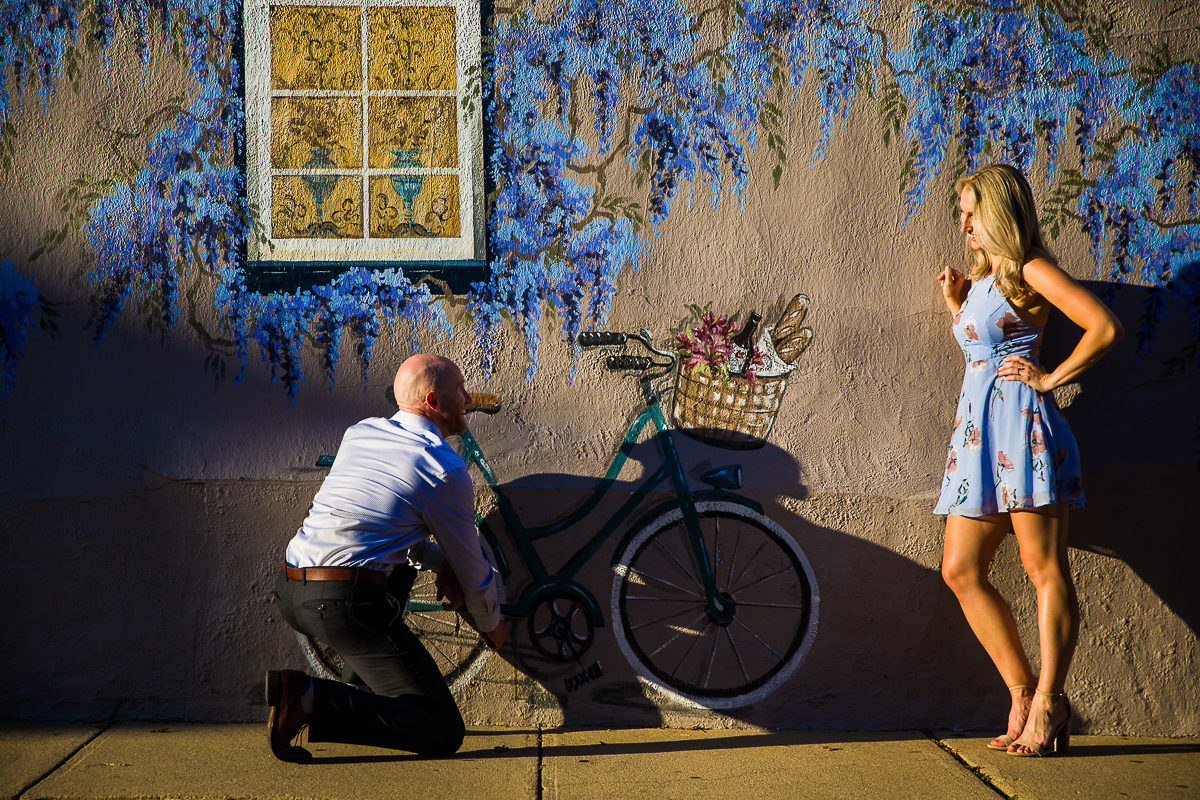 It Takes Two to Tango

Sara explained, “Early in our relationship, I organized a surprise tango lesson for us. I told Tom to meet me in Dupont Circle and to wear “comfortable clothes. Tom showed up in running clothes and sneakers (not an unreasonable interpretation of the instructions). I didn’t realize that most people in the class would be dressed to the nines for tango, haha!” 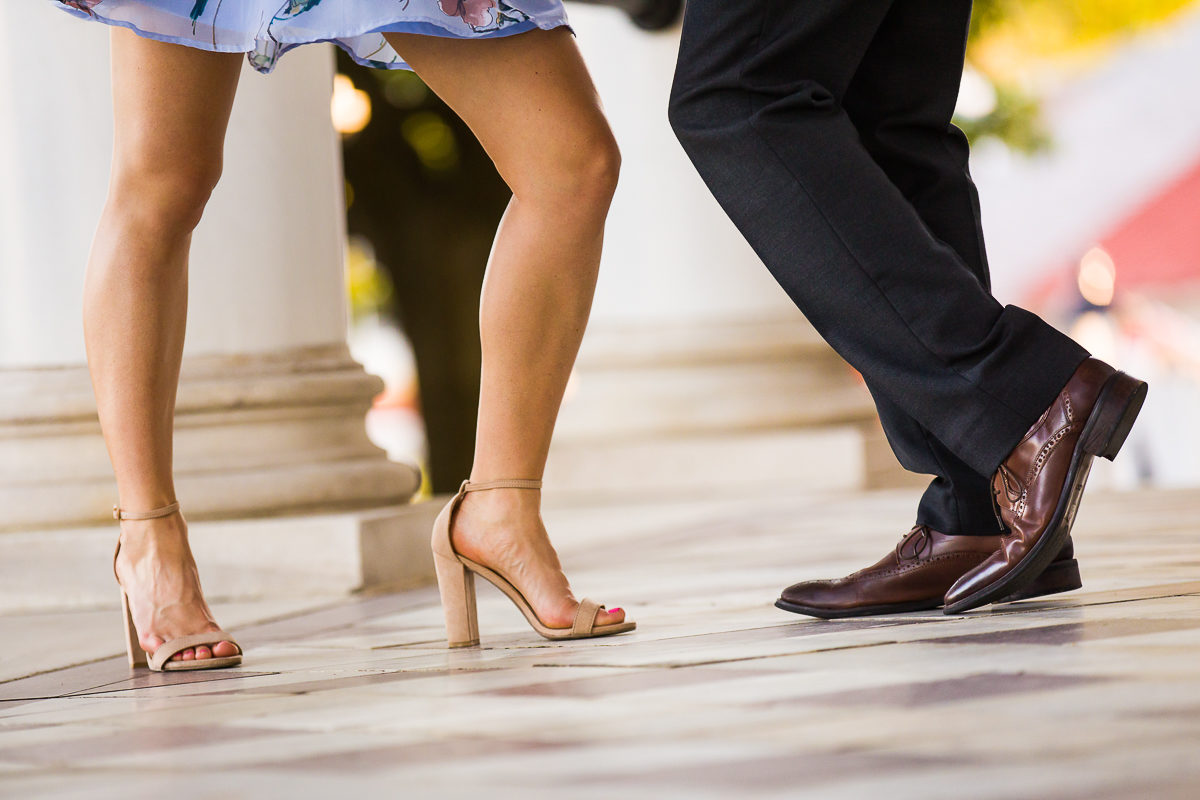 Tom never lets Sara live down that she let him show up to a fancy tango class in running shoes.  Separately, Sara and Tom love to dance and are often the ones tearing it up on the dance floor at weddings. They recently started teaching themselves some more salsa moves from YouTube videos in their apartment during the quarantine. 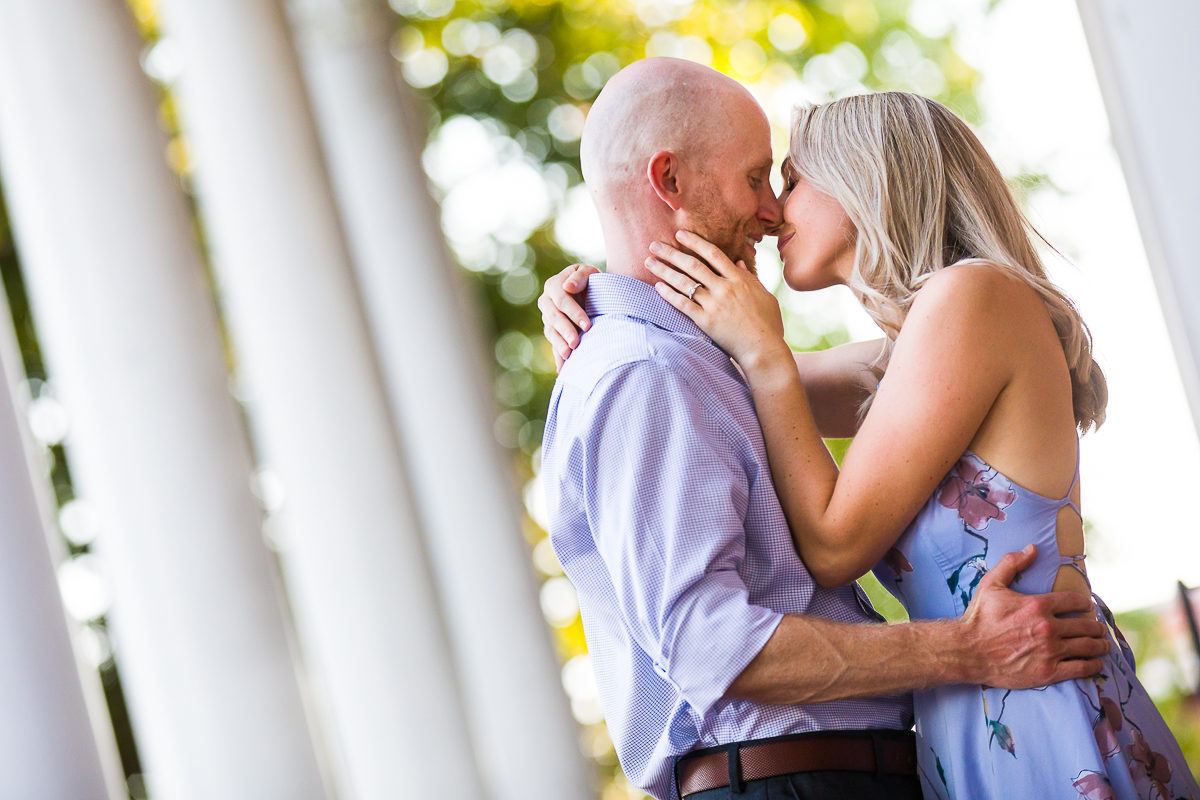 For me, it’s important to capture not just what people look like, but who they are, their interests and hobbies (ahem bikes, water, and Salsa dancing) and personalities as well as the interesting aspects of the location itself.  My opening image showed off the Maryland State House, and here is one of the inspiringly gigantic trees on its campus.  It is HUGE.
I like how it fills the frame with so much color and texture and how you can also see Sara and Tom, relaxing beneath its branches.  I think it gives a cozy, laid back vibe. 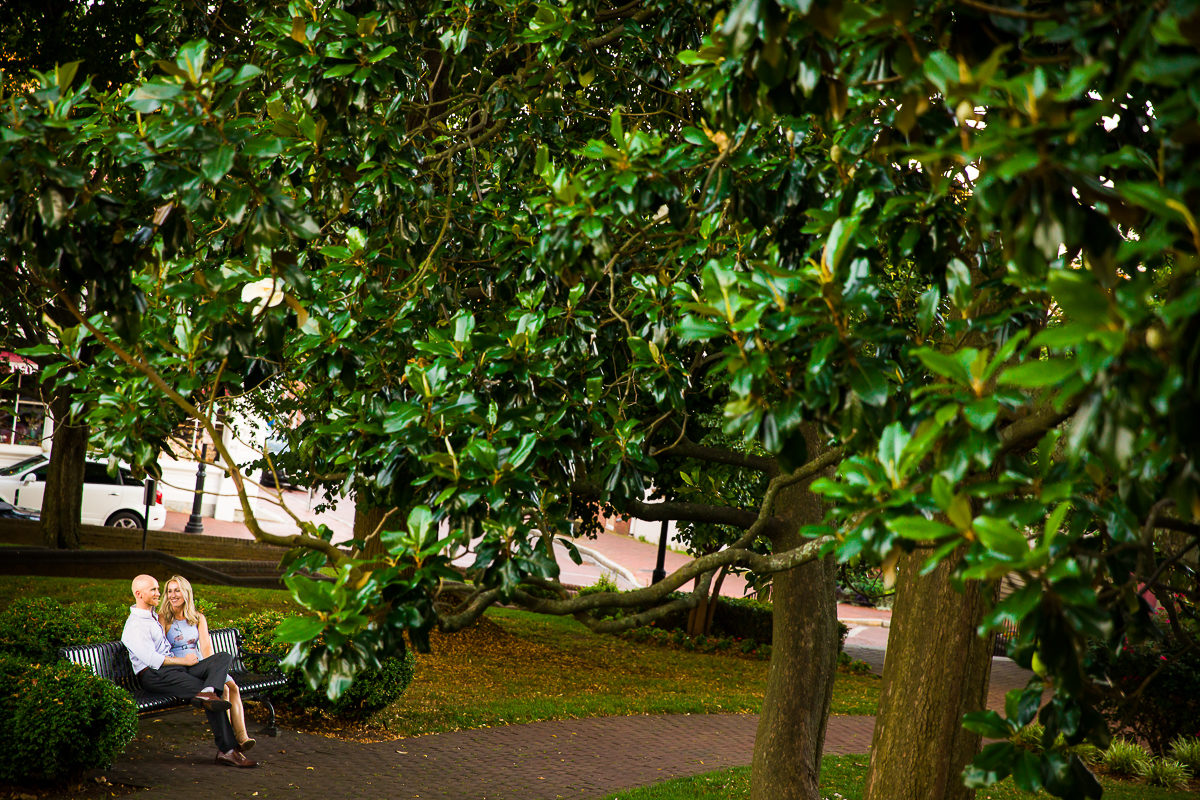 This is actually Sara & Tom’s reflection in a puddle that I noticed as we strolled the streets together.  I know Tom is looking for creative and Sara likes brick, so there is a little something for each of you here… 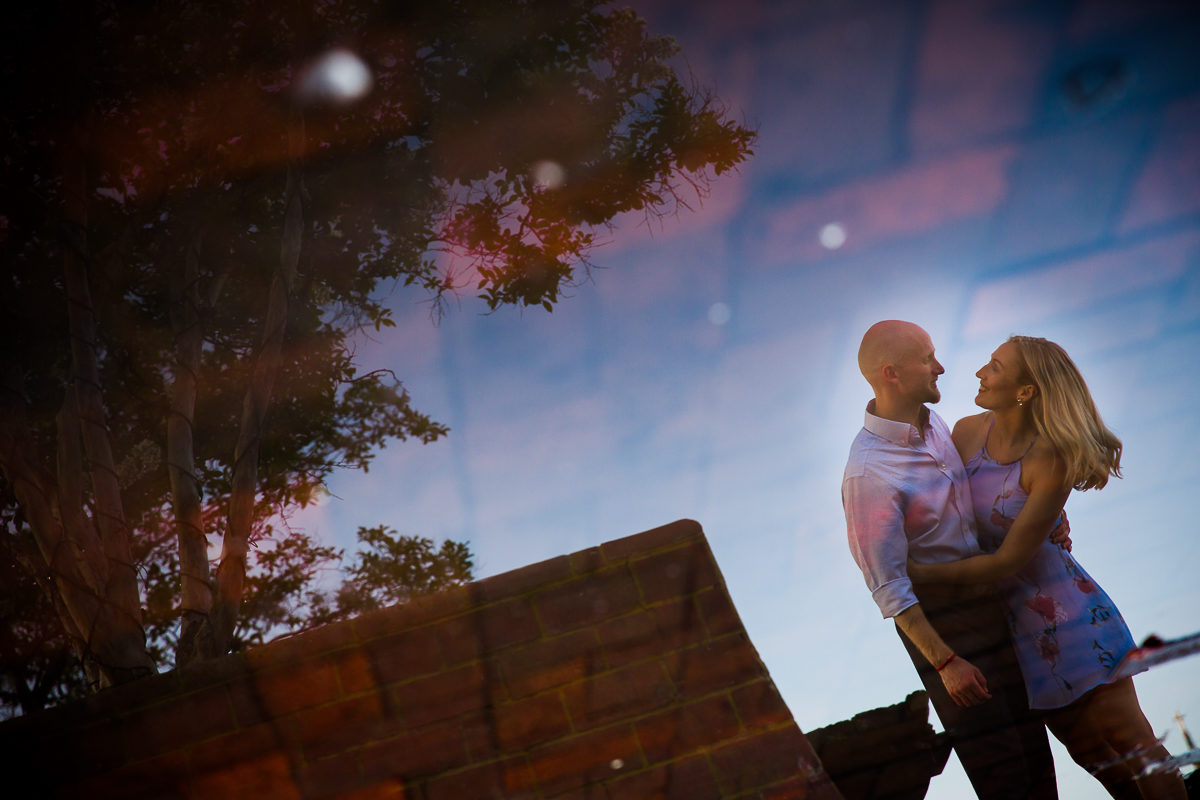 Sara explained, “For us, summer means being close to the water, whether that’s on the Bay or “down the ocean,” as we say in Maryland.”
She added, “Annapolis is right across the Chesapeake Bay from Kent Island, where our wedding venue will be. ” 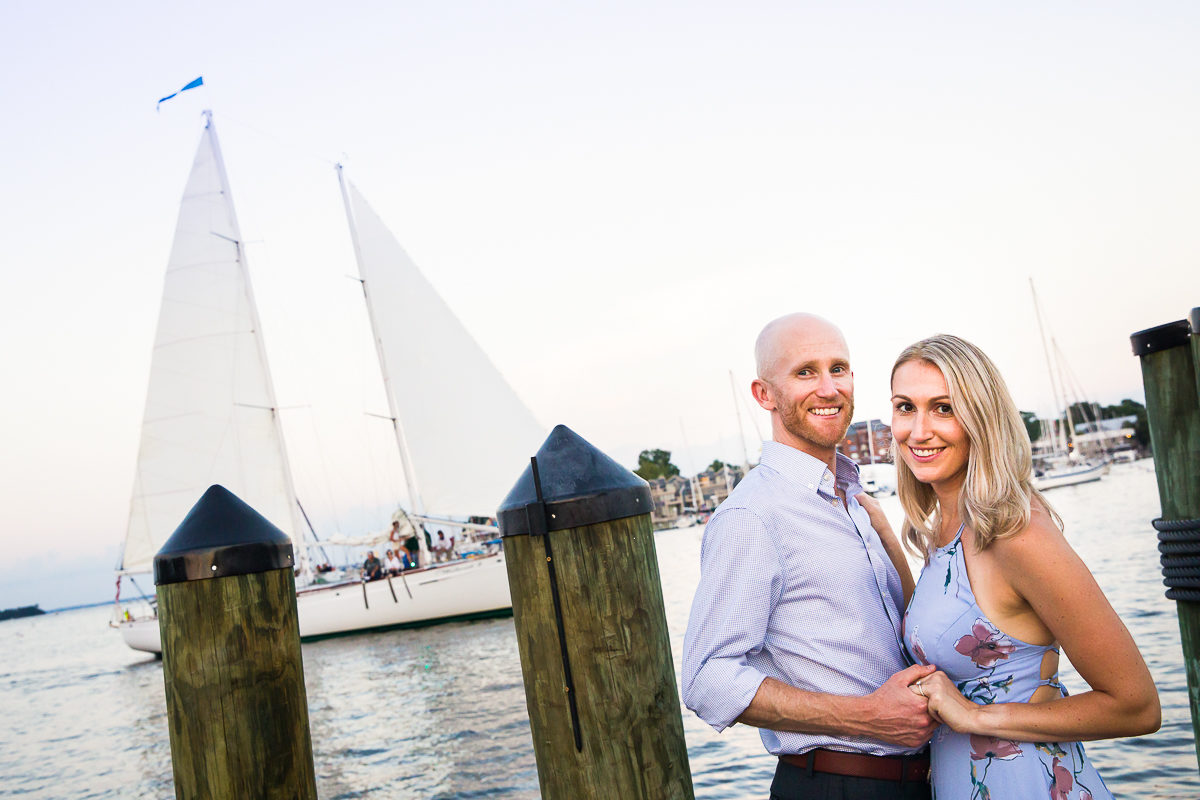 I love him for so many reasons…

Sara shared, “Tom is fun-loving, easygoing, athletic, creative, and emotionally intelligent.  I love how he connects with everyone he meets.”  She was first attracted to his friendly personality but quickly learned there was much more to him.
She added, “He is a man with a lot of hobbies: painting, playing guitar, inventing things, any and every outdoor sport. He does all these things with such joy, it makes living life with him so much fun.” 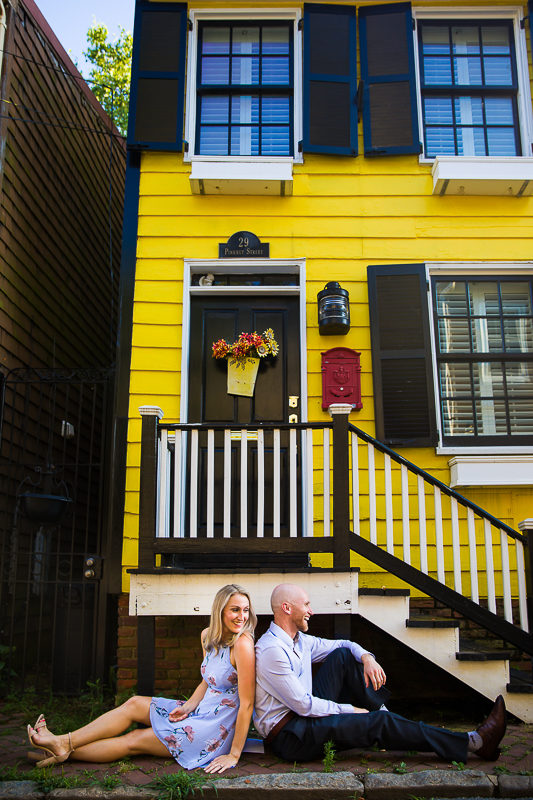 Tom and Sara are both very patriotic.  They said their first “I love you’s” during the fireworks show in Washington, DC, on the 4th of July! 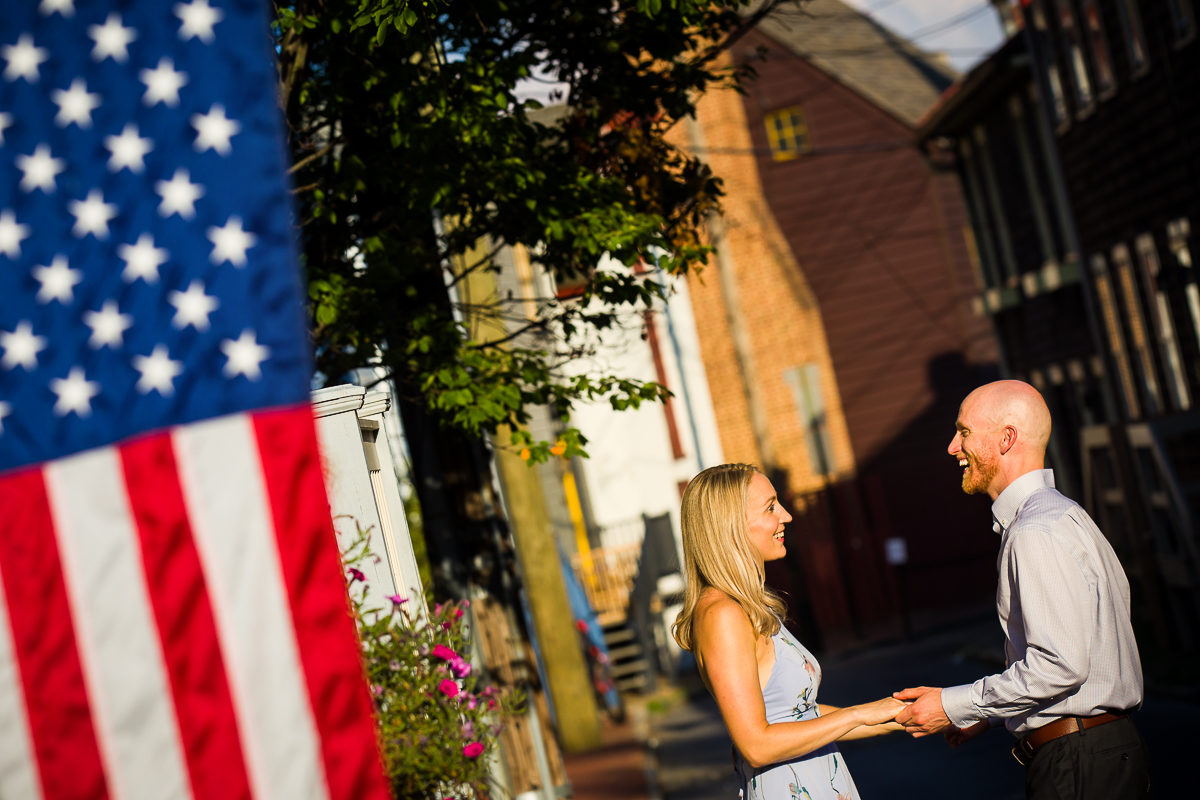 It was really hot and the promise of ending the session with ice cream was very appealing.  To also be able to capture the boats on the water and an American flag waving in the background was a bonus! 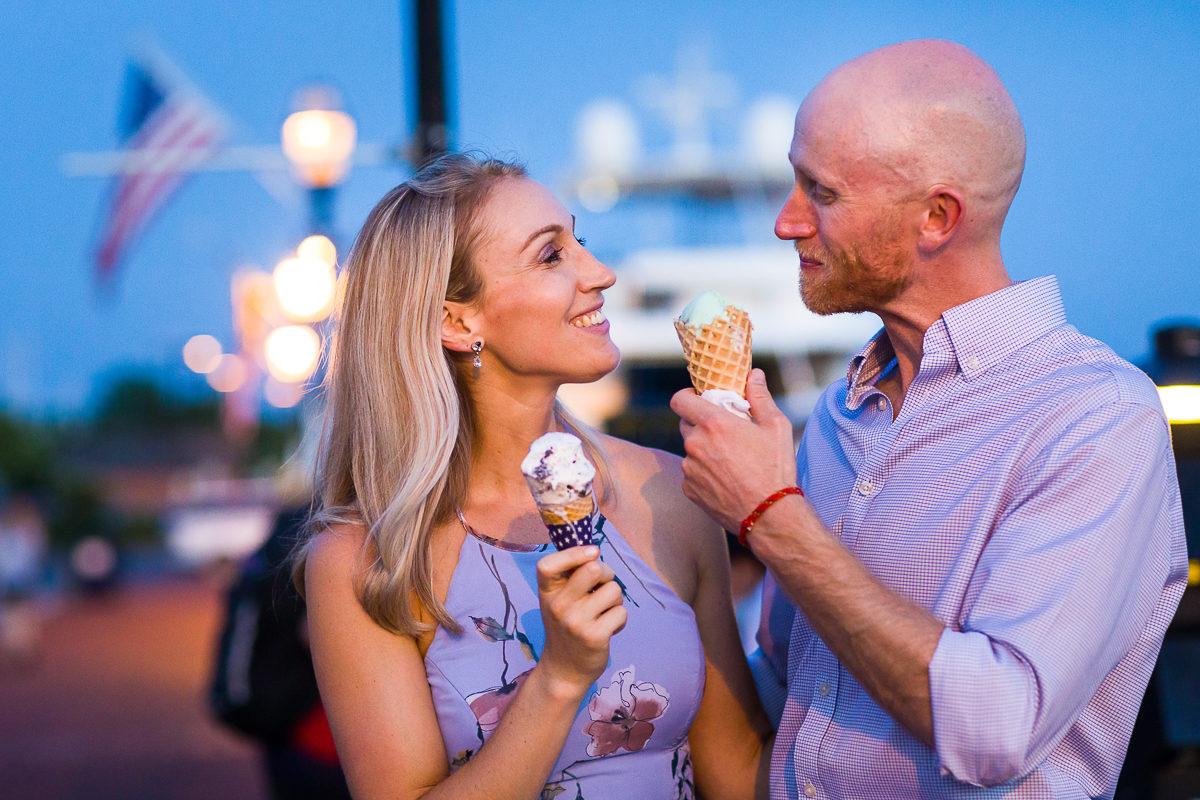 The Proposal in Puerto Rico!

Tom arranged a surprise trip. Sara knew they were going somewhere “warm” but nothing else until they arrived at the airport and she learned they were headed to Puerto Rico! Sara suspected this was an “engagement trip” but wasn’t sure where or when Tom would pop the question. Turns out, he didn’t know either! He was playing it by ear trying to find the perfect moment. 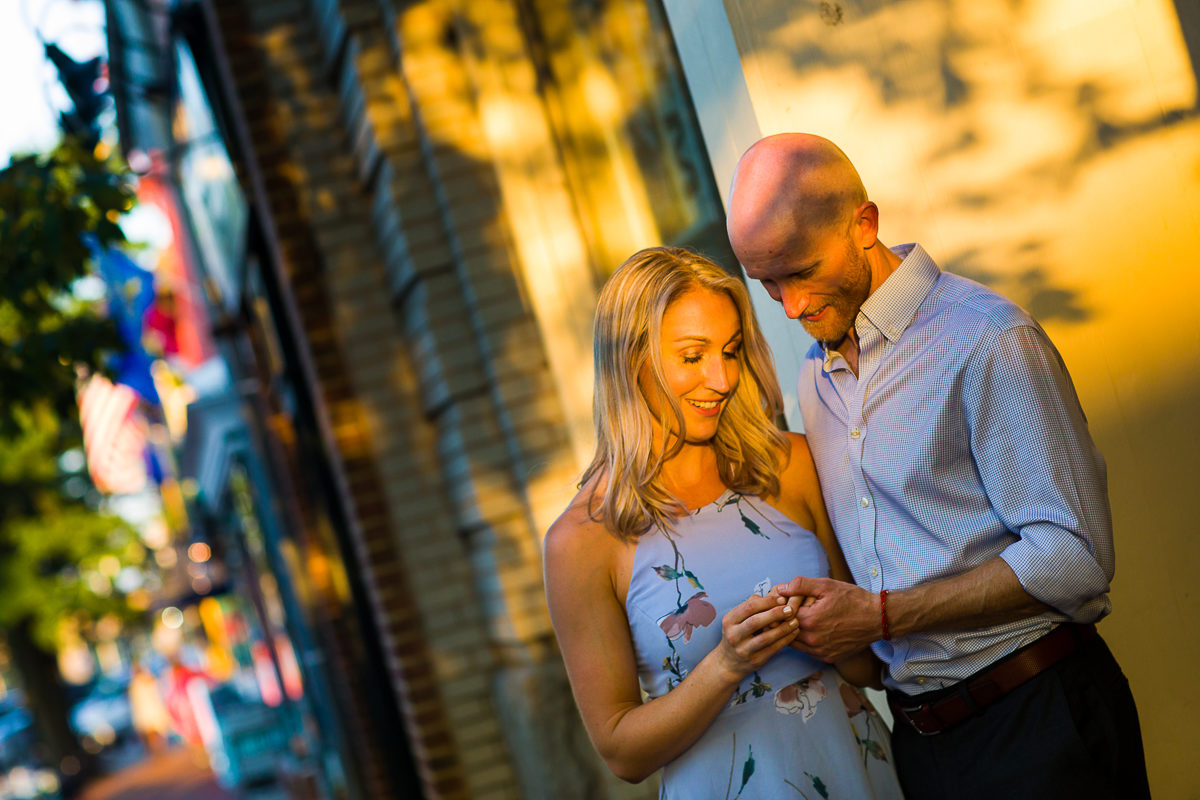 Sara shared, “On the first night, we went out salsa dancing in San Juan, which was such fun but there was no perfect proposal moment. On the second day, we went to the small island of Vieques (known for its wild beach horses). Tom drove a Jeep through the secluded beach trails trying to find the perfect spot. Everything looked perfect… A crescent-shaped beach with a panoramic view with soft waves rolling in… until a small family rolls in just as the sun is going down… time to move.”
Sara laughed, “With twenty minutes to spare until sunset, Tom insisted we drive to another more remote beach. We jostled in the Jeep as the next trail was overgrown and had deep ruts. Brush and trees whipped the body of the Jeep as Tom hurried to find our spot.” 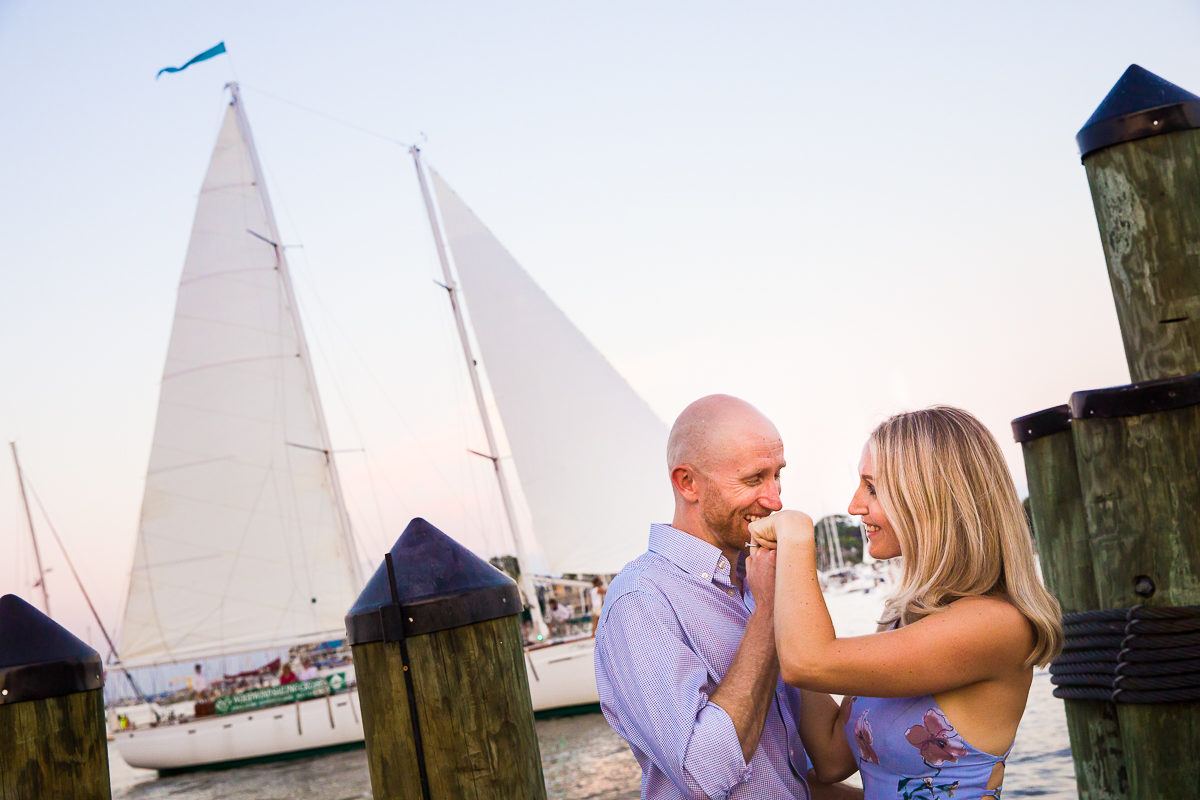 At last! As the sun was setting, Tom suggested they take a Christmas card photo and set up his camera on an auto-timer. Instead of posing for the photo, he dropped to one knee and asked Sara if she would marry him. She said, “Of course!” 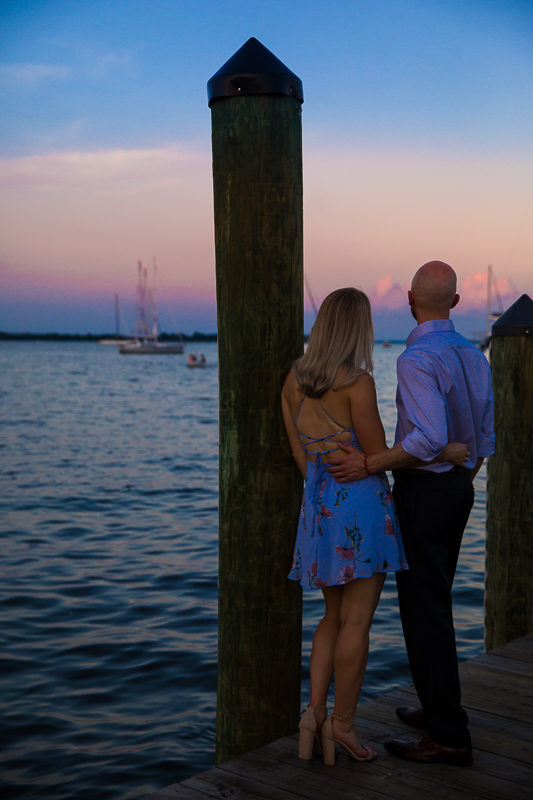 An Equal Partner, He Has Her Back

Sara smiled, “I know that I can always count on Tom to be my equal partner through thick and thin.  He is deeply loyal and loving to his family and friends (many of whom have been in his life for more than twenty years)!” 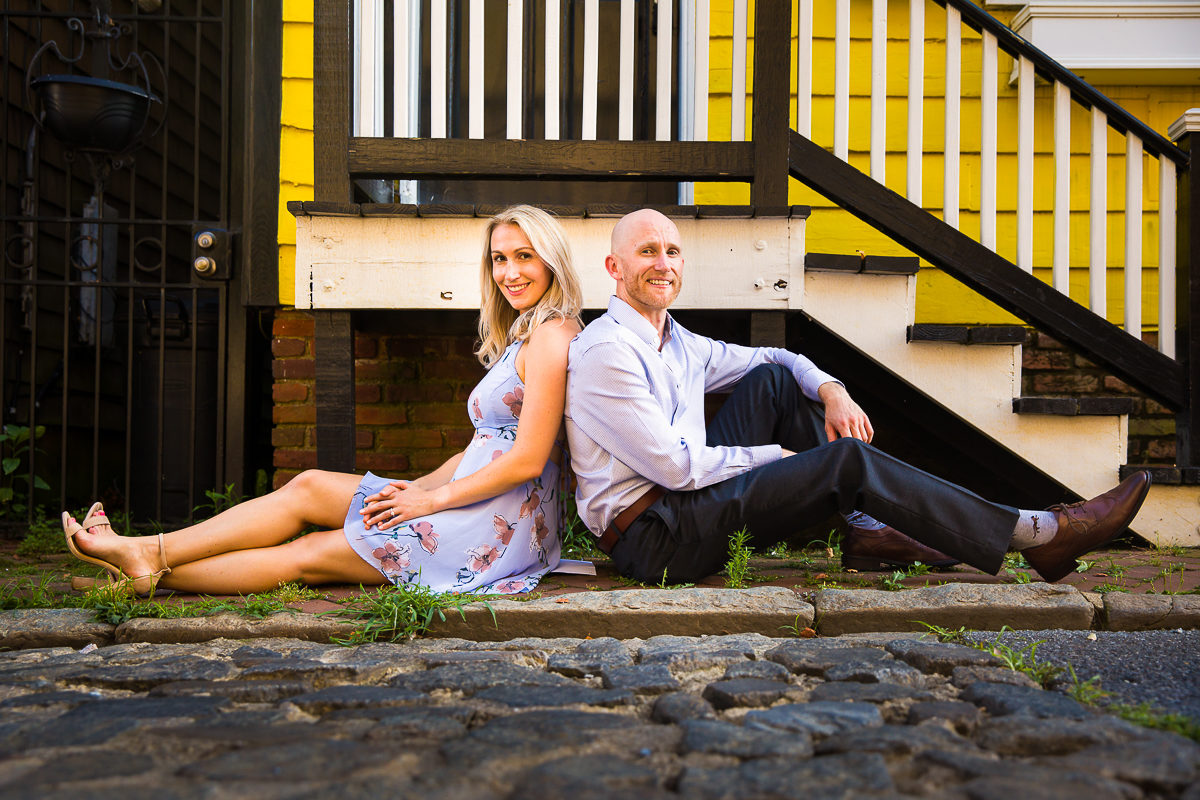 Tom shared, “I blurted out “You’re the sweetest person I know” and I meant it. We danced wildly without caution in empty bars. Overly dressed in ball gowns and my Dad’s suit jacket for casual dinners. We fell in love in the moment and that’s all I wanted.”
I used a tilt-shift effect here and wanted to show that intense, dizzy falling in love feeling…

What they are looking for in their Engagement Photos:

Sara shared, “We’re very inexperienced models, so there is that, but we hope the photos capture our chemistry and love. We are excited to see ourselves laughing and smiling, interacting together, just us being in love and looking natural.  At the end of the day, it’s all about having fun, and we definitely had so much fun with you!”
What do you think so far, guys? 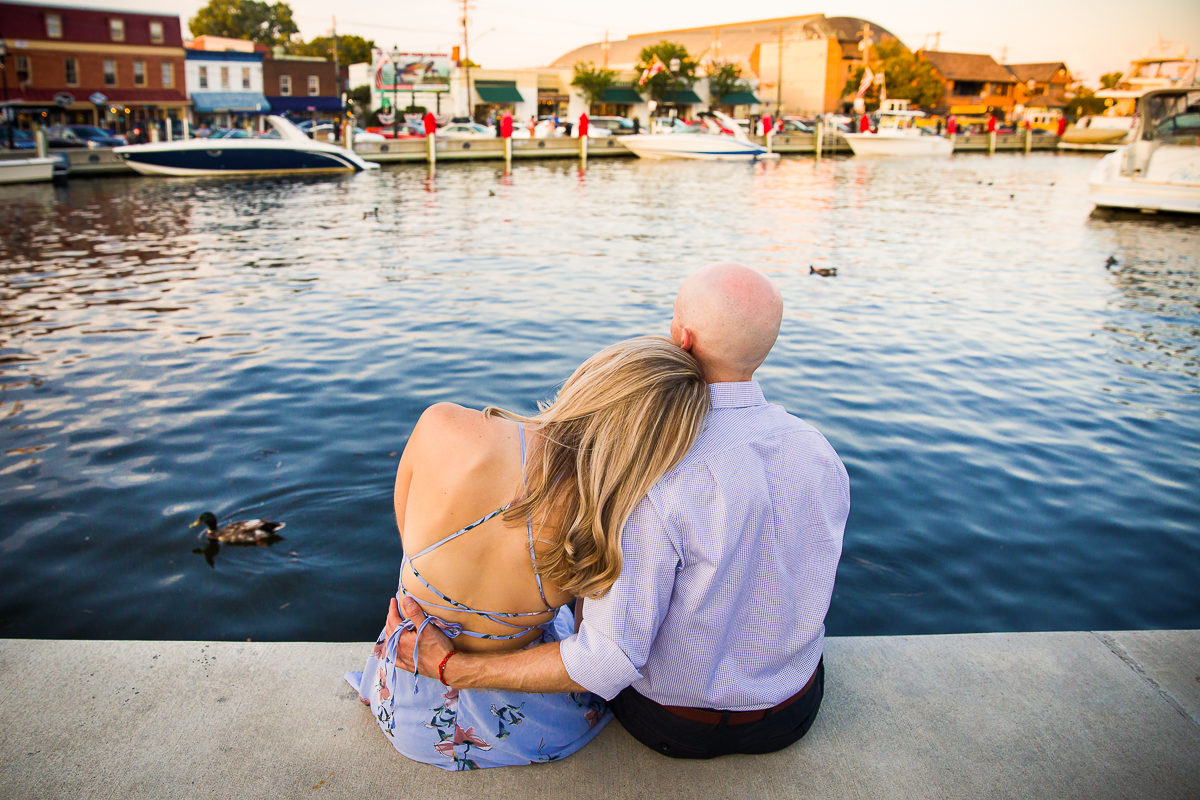 Tom first asked for Sara’s number after a happy hour at Sauf Haus beer garden. They had talked all night, and when she had to leave he offered to walk her to her bus stop. It was late September, the weather in DC was pleasant (for once), and it was a magical weeknight evening.
Sara had asked Tom if he wanted to be her date to a vineyard that weekend, but he politely declined as he was going to be out of town. Right as her bus arrived, Tom asked for her number — but she didn’t want to miss the bus, so she left him hanging and hopped aboard!
The disappearing act must have intrigued Tom, because he tracked her number down through friends, changed his plans, and was able to make the date at the vineyard that weekend. 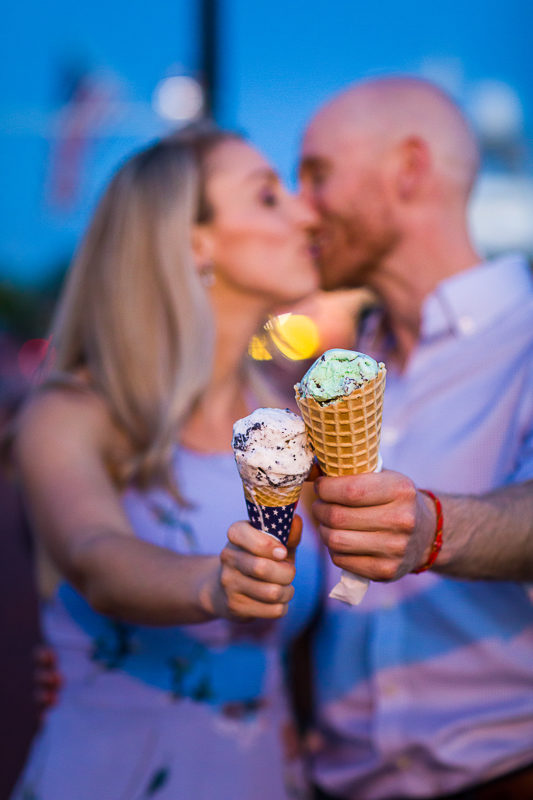 Something Special was Underway…

A few weeks later, they’d gone on their third or fourth date near Tom’s house in Dupont. The first stop was a tiny authentic basement joint called Sakuramen, where the food was so spicy that Sara cried! After dinner, they stopped for frozen yogurt before proceeding to their (soon to be) favorite neighborhood bar, Bar Charley.
Bar Charley would become a staple for them over the next few years, but this was their first visit together. It’s a cozy little underground bar — think low lighting and hand-crafted cocktails. They had an Old Fashioned (or three), but when it was time to head home they discovered that rain was coming down in sheets outside. Tom’s place was only a few blocks away, so they held hands and ran for it.
They got soaked, but they both laughed so hard they couldn’t breathe. Back at Tom’s, in front of the fireplace, they both knew that something special was underway. 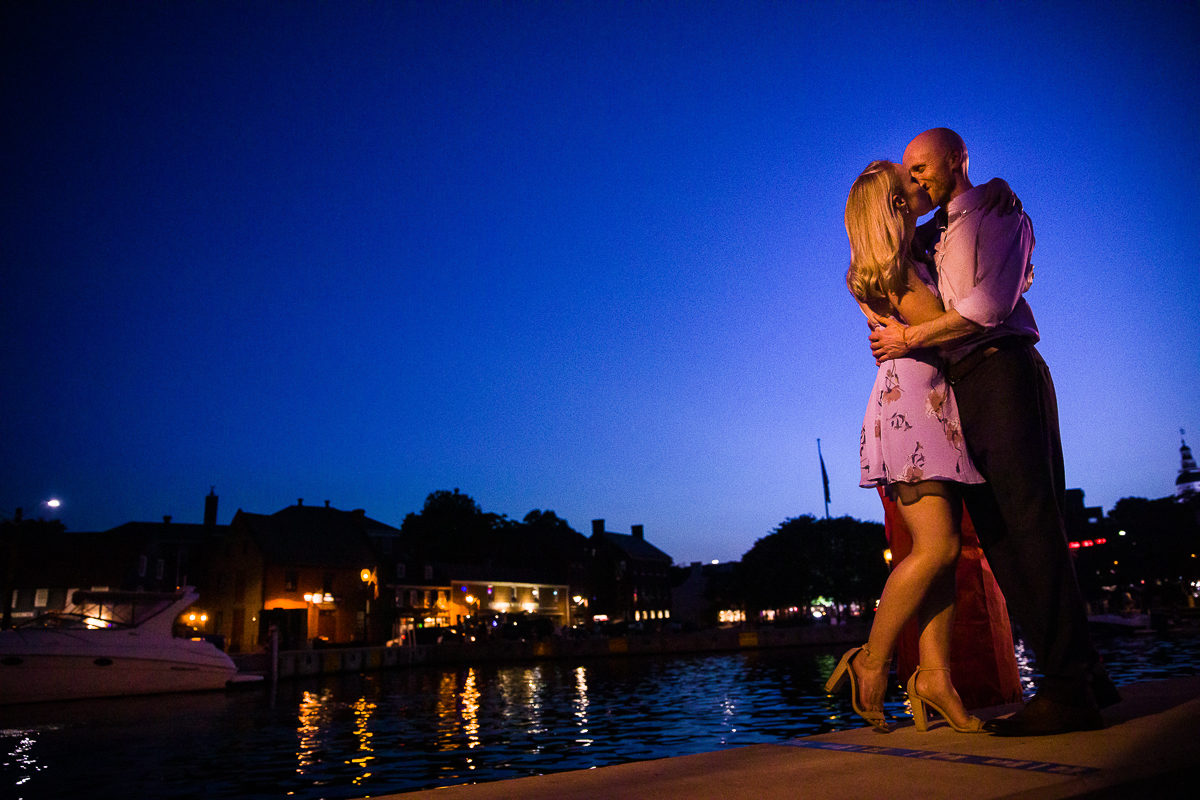 Sara & Tom, thank you so much for opening up and sharing all of these fun stories with me!  It was such a pleasure to get to know the two of you better and I hope I was able to capture your love, chemistry, and all the fun you had in Annapolis together!  Sara, I’m so glad you remembered me from all the way back at Rachel’s wedding!  I’m so excited to photograph your upcoming wedding at Camp Wright on Kent Island!