A heartwarming, family-centered, military promotion ceremony was the focus of this lifestyle portrait session, for me, a DC family photographer.

The touching ceremony, and how he honored his wife and family and their role in making it possible for him was incredibly beautiful.  It was a momentous occasion— achieving the rank of Lieutenant Colonel in the United States Army after 17 years of active duty service.

I took a photojournalistic approach, photographing moments in the ceremony as they unfolded, then capturing the love, connection, and joy of childhood for this family of five in Washington, DC.

Stacey shares, “We chose Lisa because she came highly recommended by a photographer friend of ours.  Lisa attended my husband’s promotion ceremony in Washington DC and photographed that for us, and then followed that with a family photography session.”

She adds, “We are excited to see how she captured the momentous occasion of Dan achieving the rank of Lieutenant Colonel in the United States Army after 17 years of active duty service. We wanted a way to save and share this significant moment in our life as a military family. Due to Dan’s overseas tours, we had never been able to be present or part of a promotion ceremony with him before, so this time was extra special for all of us.” 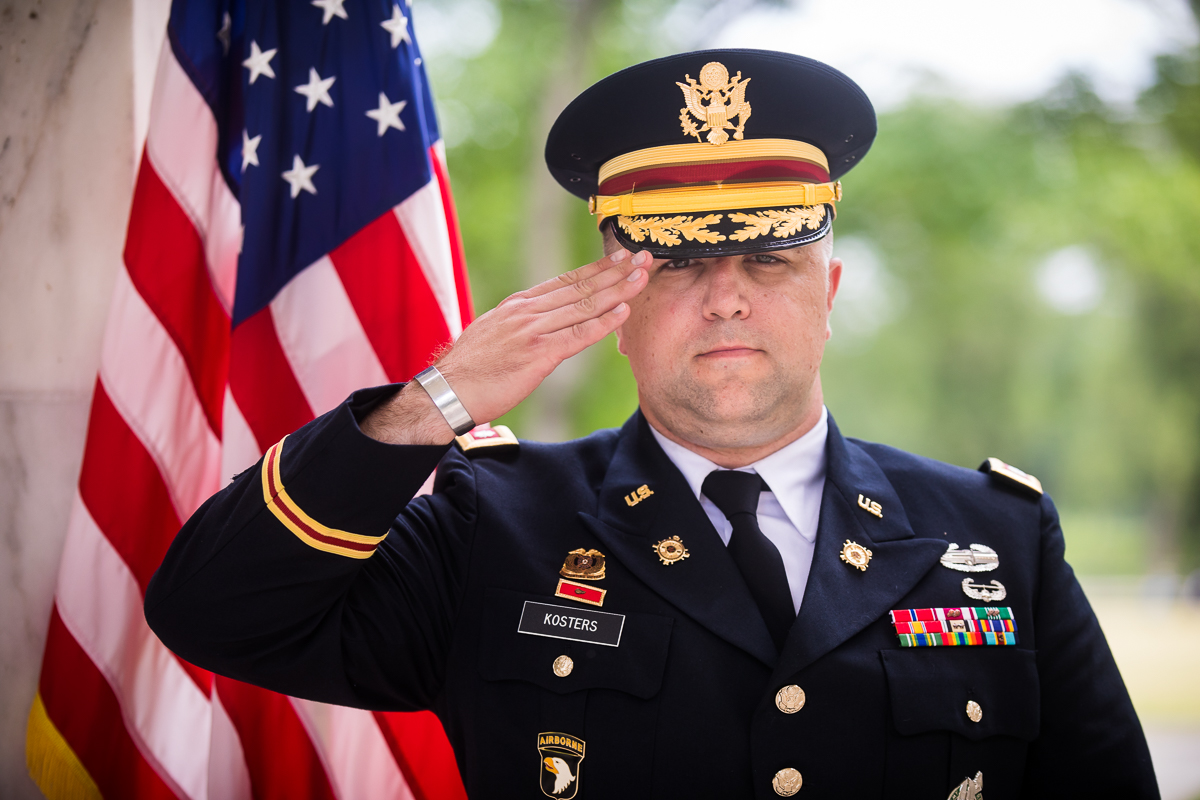 Everyone in attendance was in great spirits and seemed excited to be a part of Dan’s promotion ceremony, laughing and joking.

I love the chance to photograph important details like this American soldier preparing the flag before the ceremony starts. 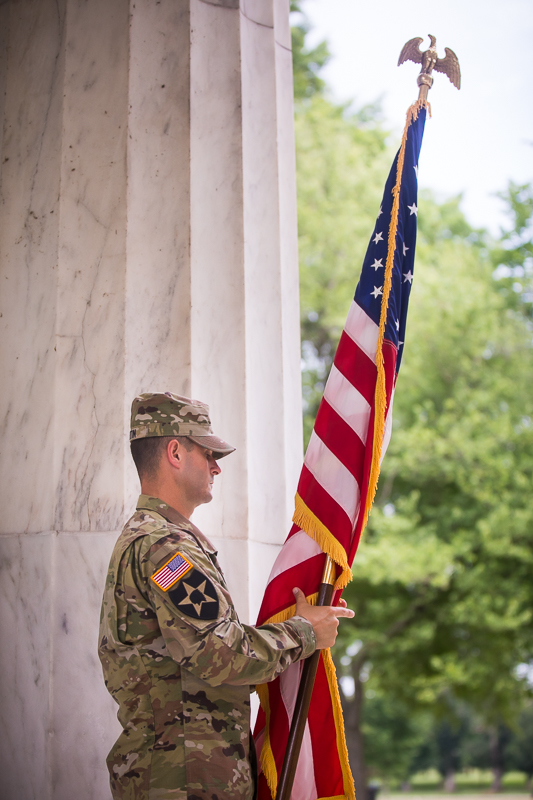 Stacey shares, “We chose Washington, D.C. for Dan’s promotion ceremony because, as a military family that has served across the country and lived in many states, it made sense to us to hold the ceremony in the Nation’s capital.  We have no specific state that we call “home.” Home is wherever we’re together!” 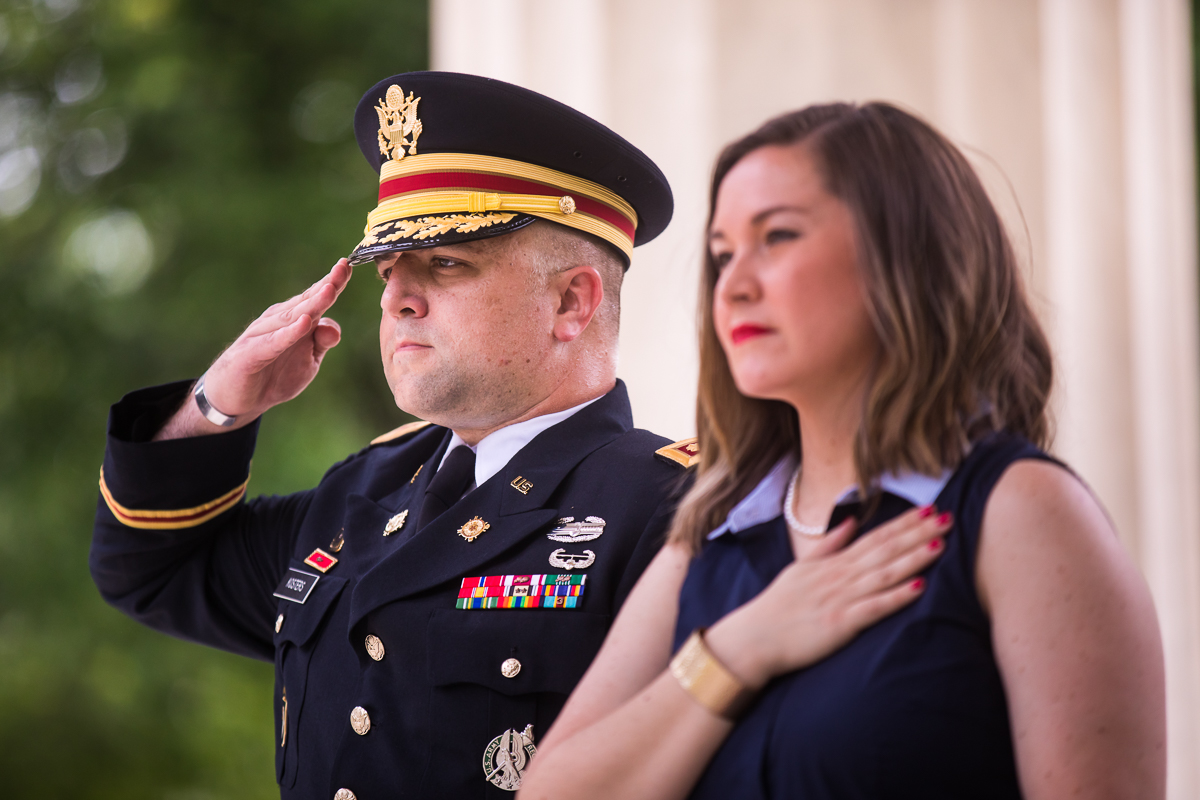 Stacey continues, “Dan chose the DC War Memorial as the backdrop for the ceremony partly because it is a beautiful location, but also because it can be forgotten among the other memorials, and is remote on the National Mall.”

She adds, “He relates to the location having served in many remote assignments and saw it as a symbolic place to highlight during a major point in his career.” 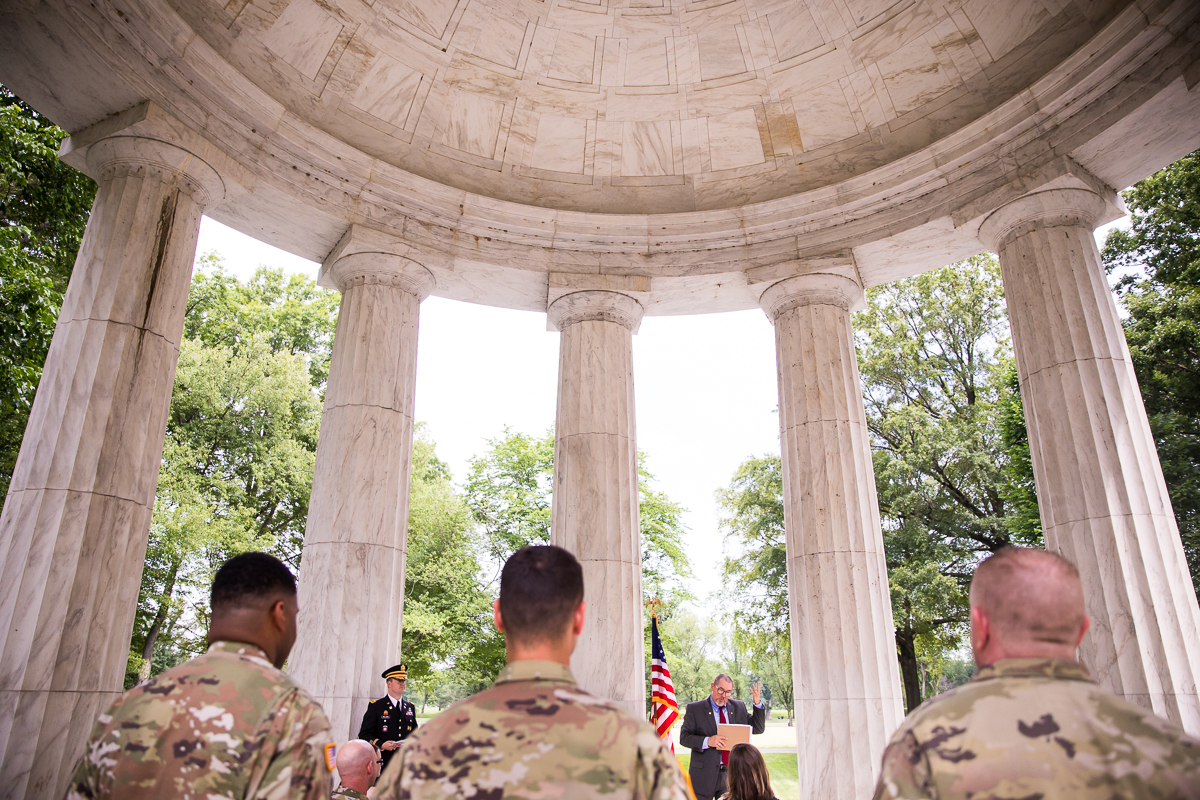 Dan was so happy to be promoted to Lieutenant Colonel after serving so long in the United States Army. 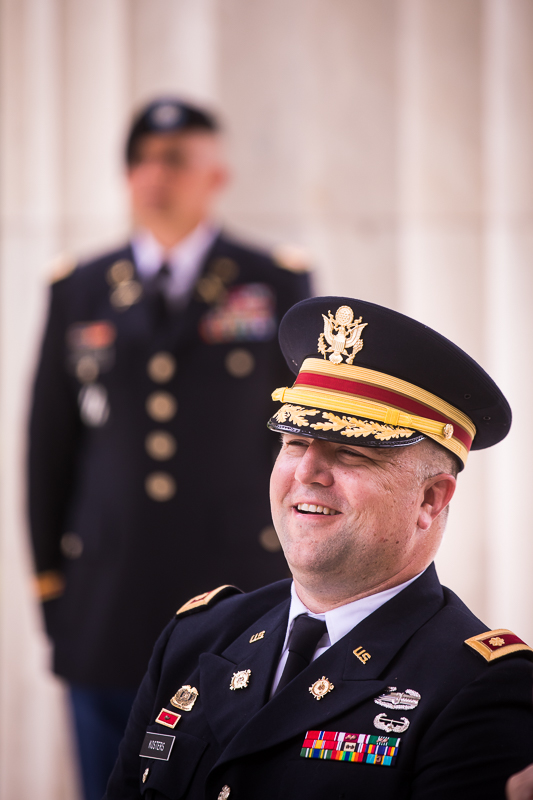 The game changer in this case, was that his young family was in attendance for this promotion, something he did not take for granted.

Having the family pin on Dan’s promotional items was such an impactful moment. This is definitely my favorite photo from the day!

This was such an exciting moment: Dan officially swearing-in to take the Lieutenant Colonel ranking.  He was so proud.

You can see how I used the columns and negative space to create frames for this photograph.  It draws your eye to his hand and gives balance to the image: 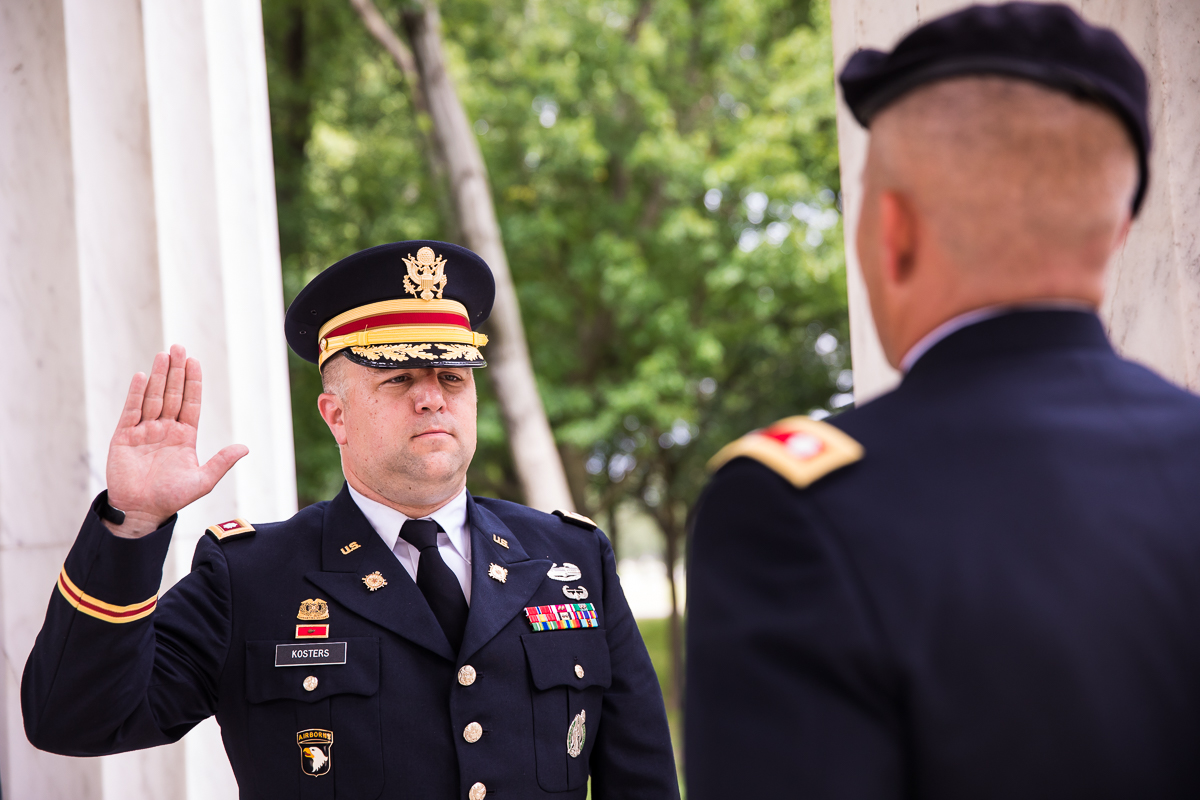 Dan shares, “The promotion ceremony was not just for me, it was an important day for us as a family.  Often, I get the credit of being thanked, but the sacrifice belongs mostly to Stacey and the kids.”

He continues, “It’s really important to highlight their service to our Nation too.  This promotion ceremony was just as much about their service as it was my own.” 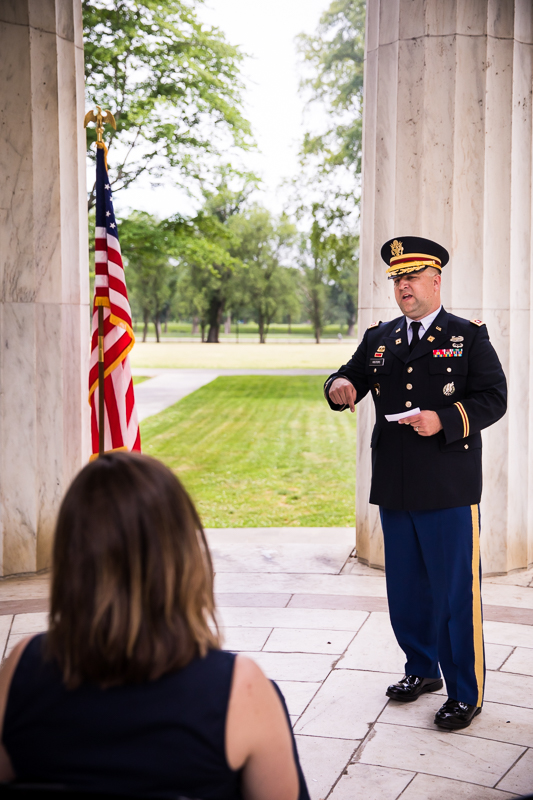 It was evident that Dan had incredible colleagues there to support him during his promotion. 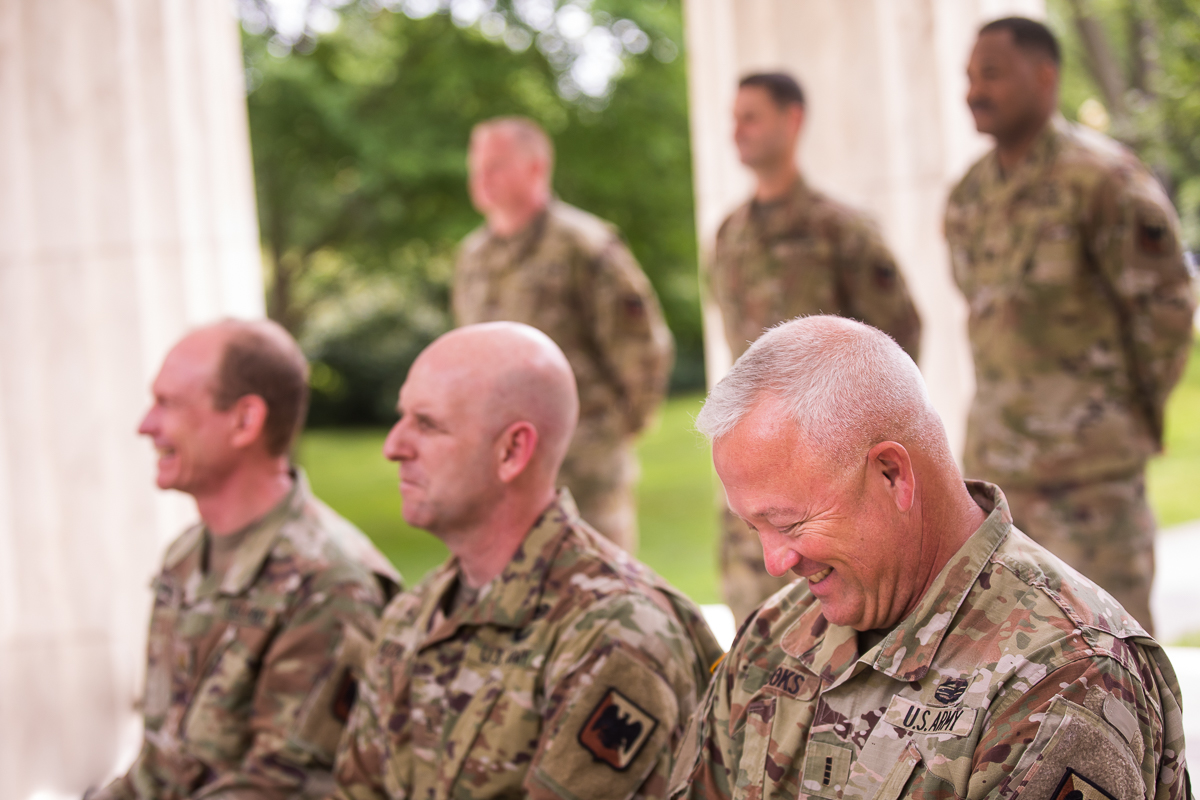 The final handshakes to congratulate Dan!  Again, compositionally, I wanted to show all 3 players as well as the flag and columns in this show and angled everything accordingly.

I capture not just what families look like, but what they feel like– the emotion behind their faces.

Here Dan smiles proudly at his wife following the ceremony.  Such a sweet moment.  You can feel the love! 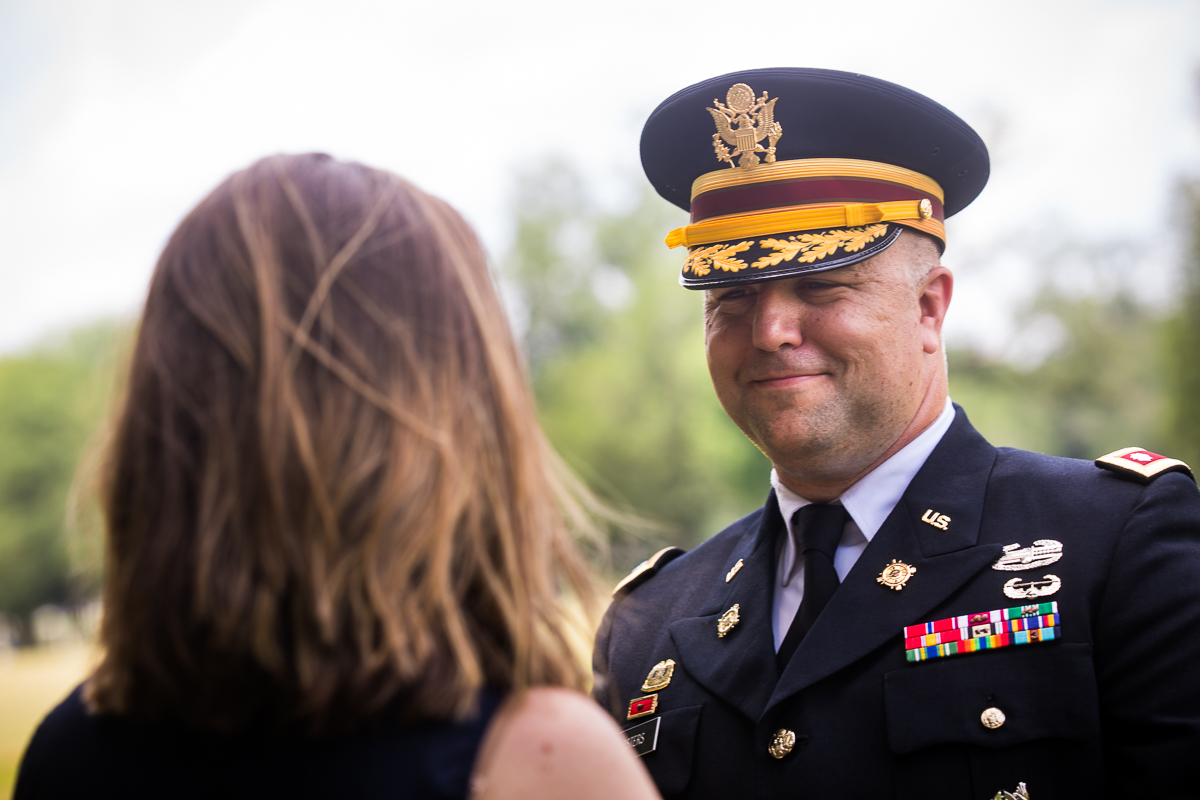 A Wide Mix of Photos

I give my clients an eclectic mix of candid moments and posed portraits that really capture their lifestyle as a family.  Using a blend of photojournalism, lifestyle, and traditional portrait photography sets me apart from many other family photographers in the Washington DC area.

To get all three kids and mom and dad simultaneously smiling and looking great in the heat is no easy feat, but we accomplished it, no problem!  Check out their red, white and blue attire!

Stacey shares, “Dan has served 3 tours overseas and our family has been through many months with him gone at training or on short trips across the country.  We don’t live near any family and rarely have the opportunity to celebrate holidays or birthdays with them, which is tough for us.  The perk to separation from our loved ones is that the 5 of us are incredibly bonded.  We have learned to rely on each other because, usually, it’s all we have.”

She continues, “We travel around the places we’ve been stationed. Sort of making America, itself, a part of our family. Yosemite National Park, Colonial Williamsburg and lots of other places that are fun to visit and take the kids but also represent our Nation too. It is a hard life for the kids but we do it because we love our country and we get the opportunity to show them why.” 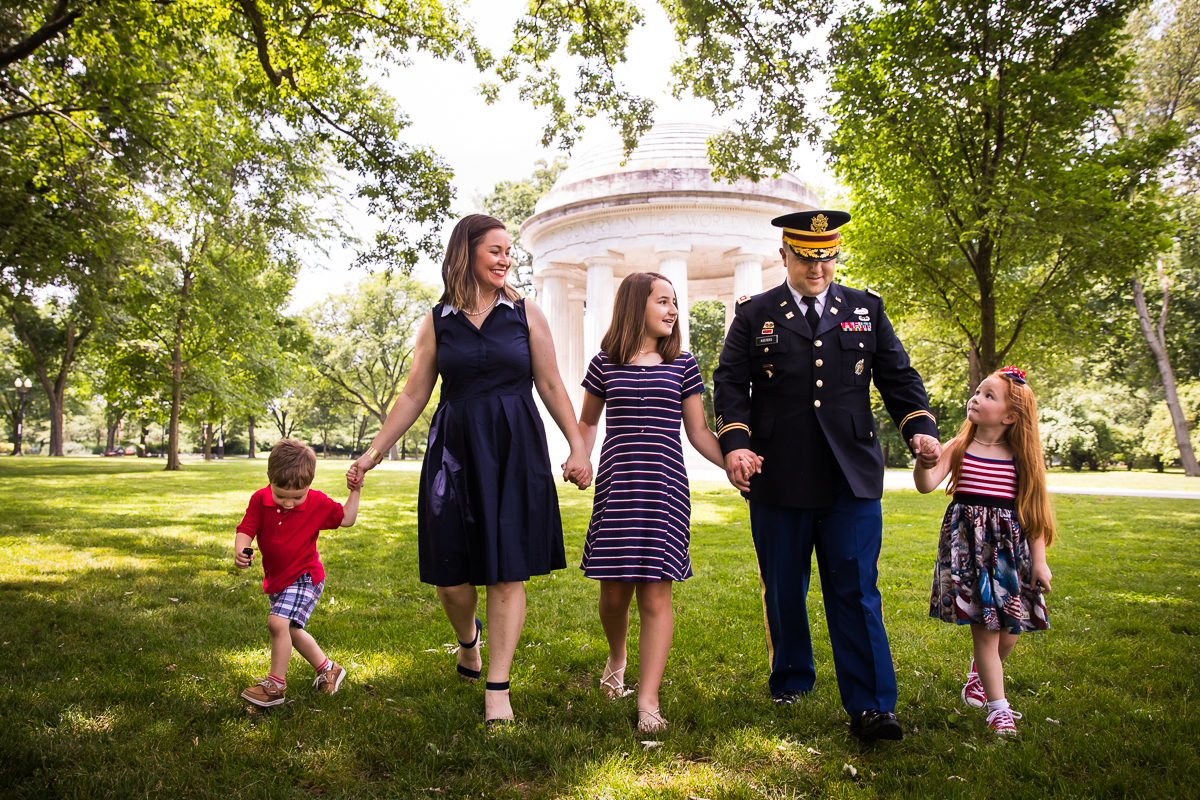 Being a DC family photographer certainly has its perks– easy access to all the monuments on the National Mall.  They are in such close proximity, that we were able to include The Lincoln Memorial, Washington Monument, Reflecting Pool, and World War Memorial with minimal effort. 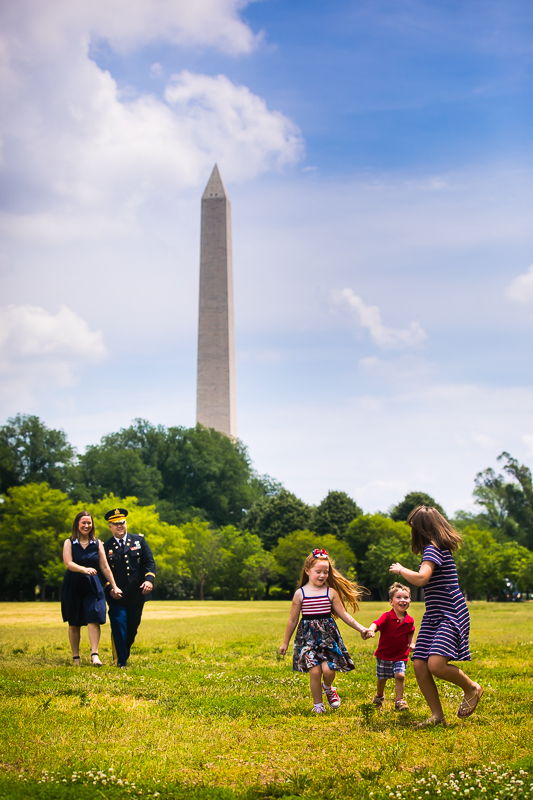 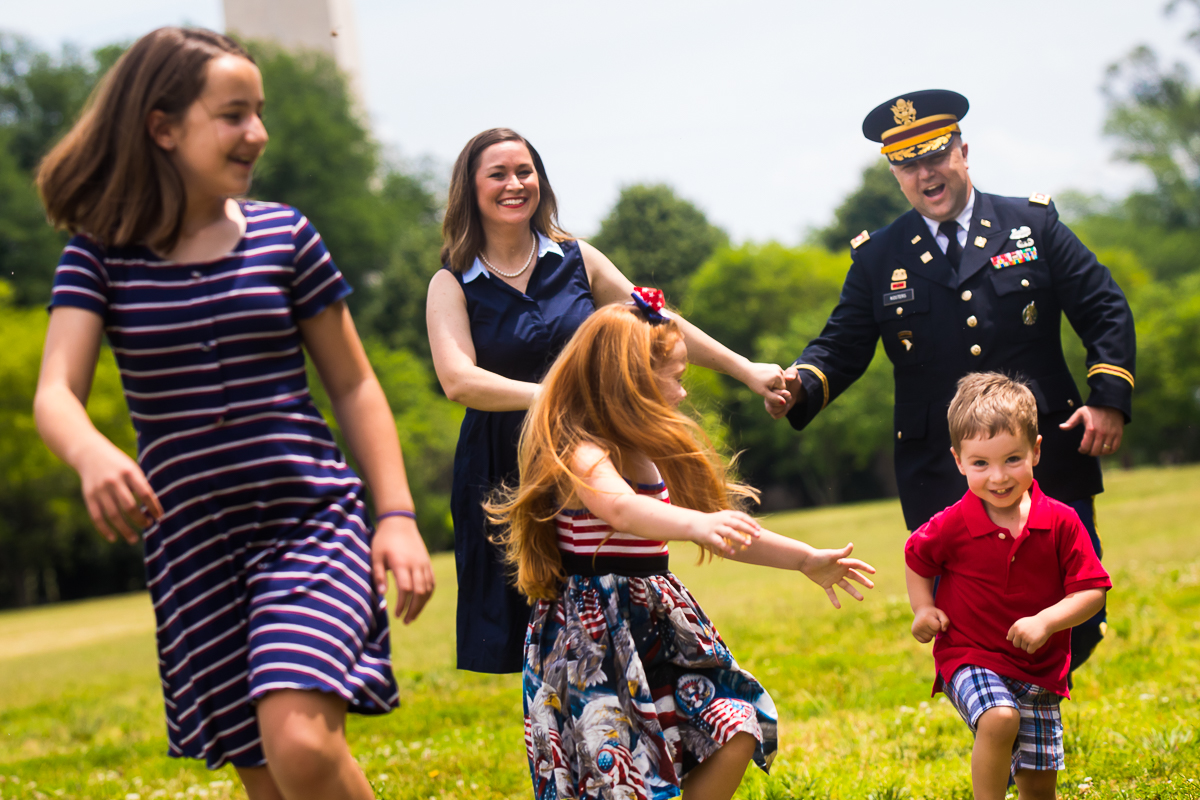 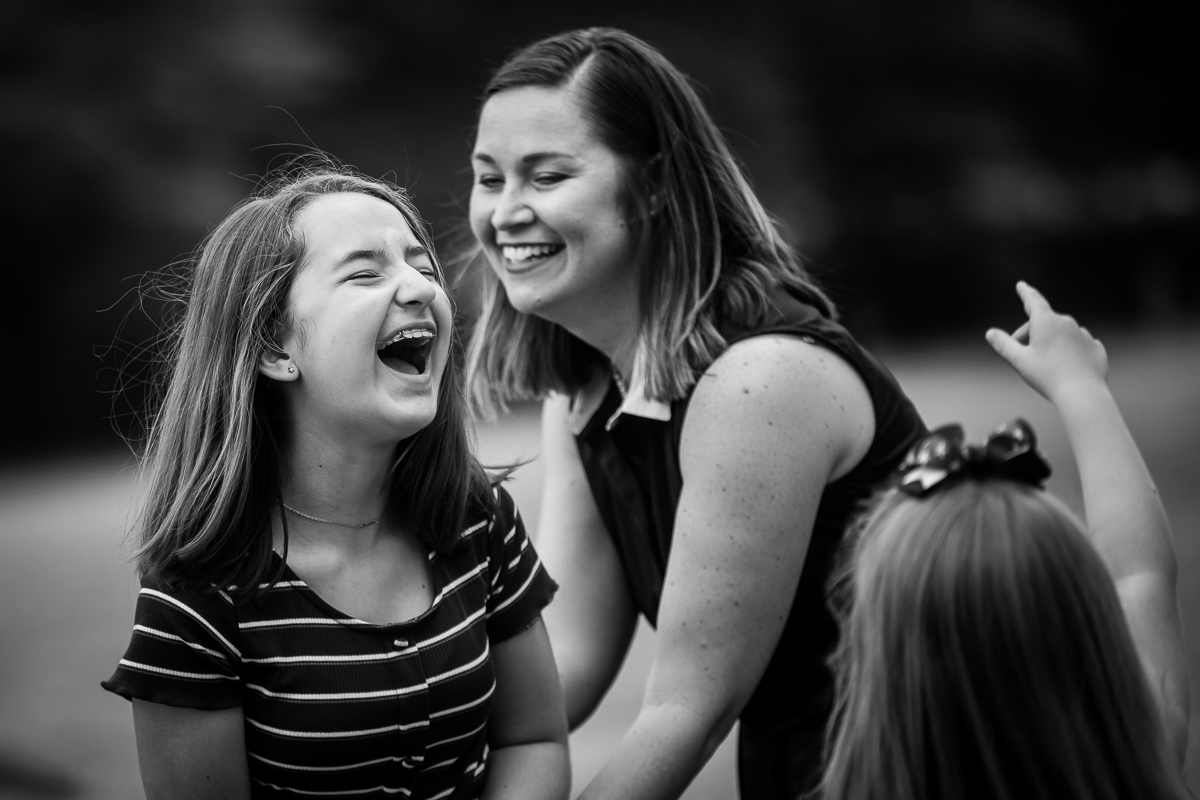 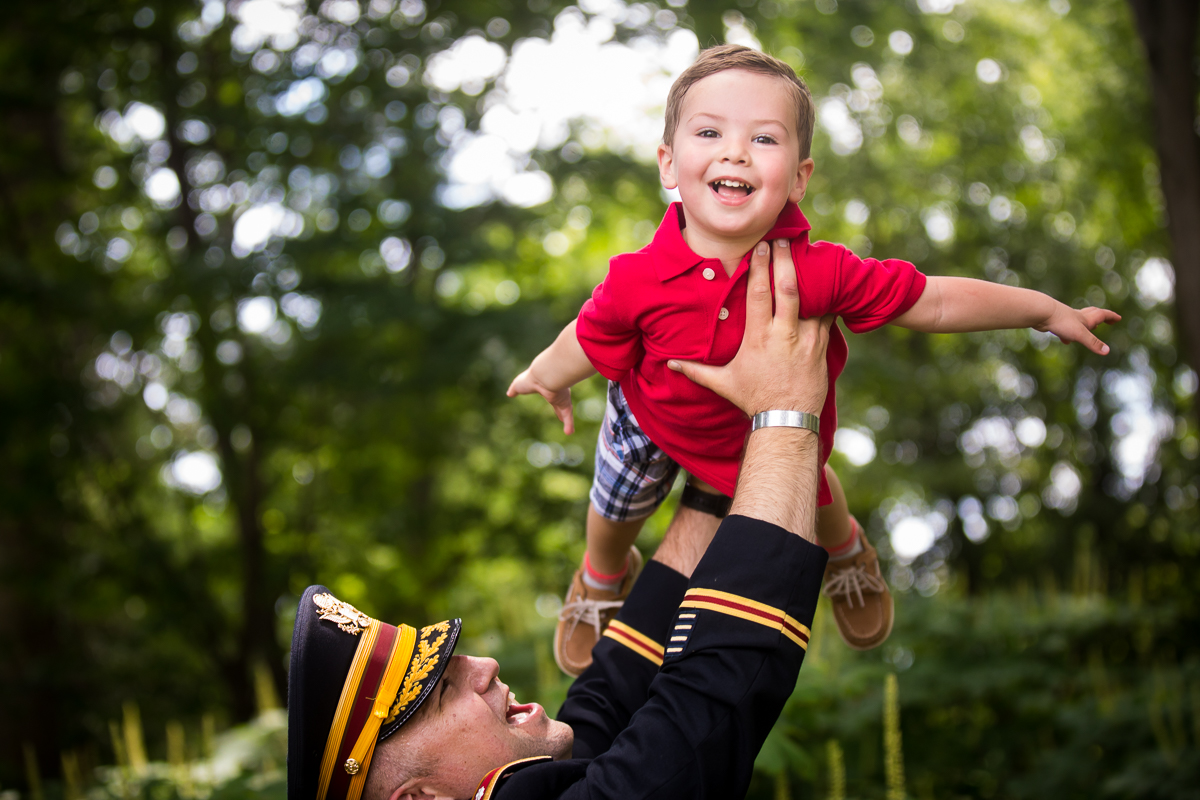 Stacey says, “Dan was on leave for Christmas and we had just finished celebrating New Year 2020 when he got a call from his command. He was told to report to Fort Bragg, NC immediately and that he might be deploying so he should bring his essential gear along.”

Stacey smiles, “Dan returned about 6 weeks later, just in time to take the Christmas decorations down on Valentine’s Day. This is just one example of our crazy patriotic life and why this promotion was such a celebration!” 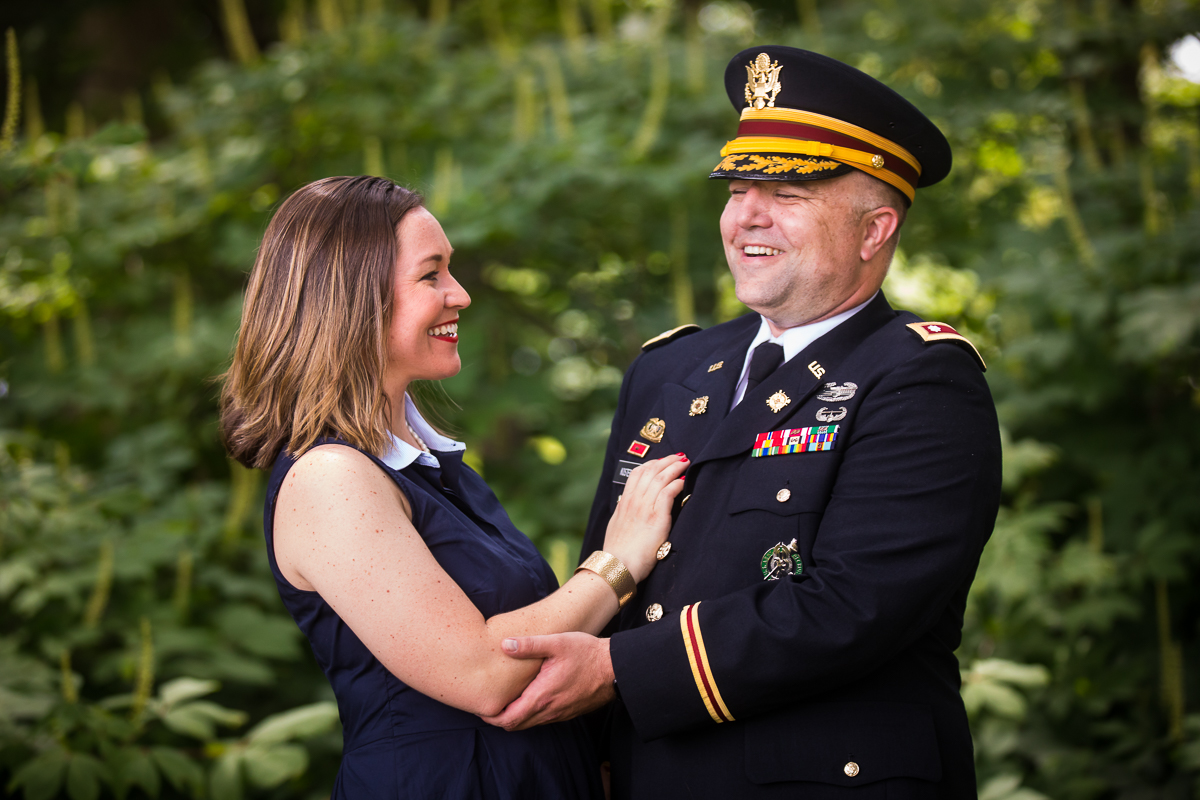 Scarlett had so much fun spinning around. And can we talk about her outfit? So cute!  I love being a DC family photographer! 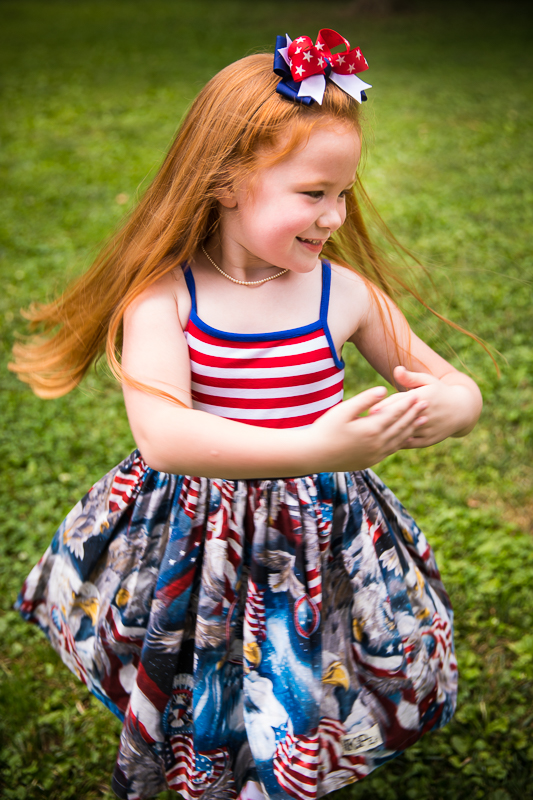 Capturing moments like this where Scarlett hugs Maverick while their dad smiles proudly in the background are everything!  Another one of the reasons I love being a DC family photographer! 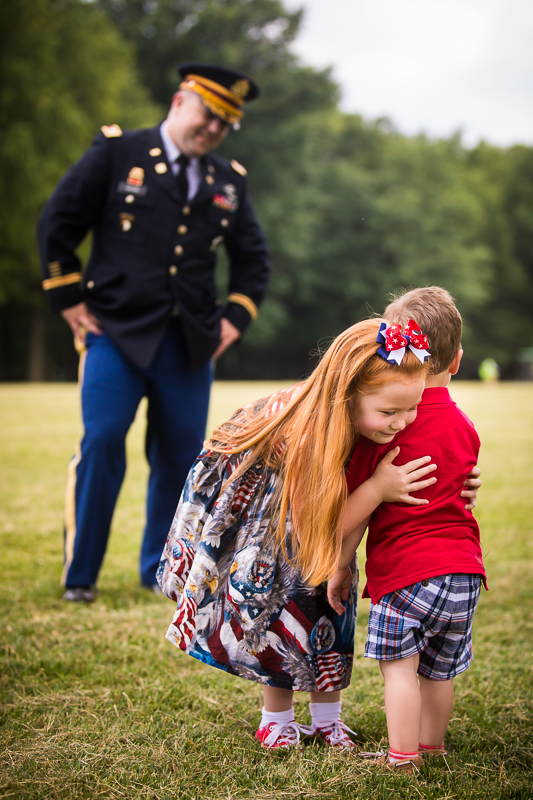 Founders of the Family

Whenever I mention getting a few shots of the husband and wife alone during a lifestyle family session, I’m always met with some hesitation.

Couples often humbly mention some physical attribute that they don’t think is up to par at the moment, but seriously, these shots are so important!   Your bodies have brought life into this world, they are incredible!  You are incredible!  Time keeps marching on, so capturing real-life, now, authentically is really important.  Think of the few photographs you have of your own parents, these are gold to future generations.

These moments are everything.  In their case, I can even see shots like this comforting each other when they are away. 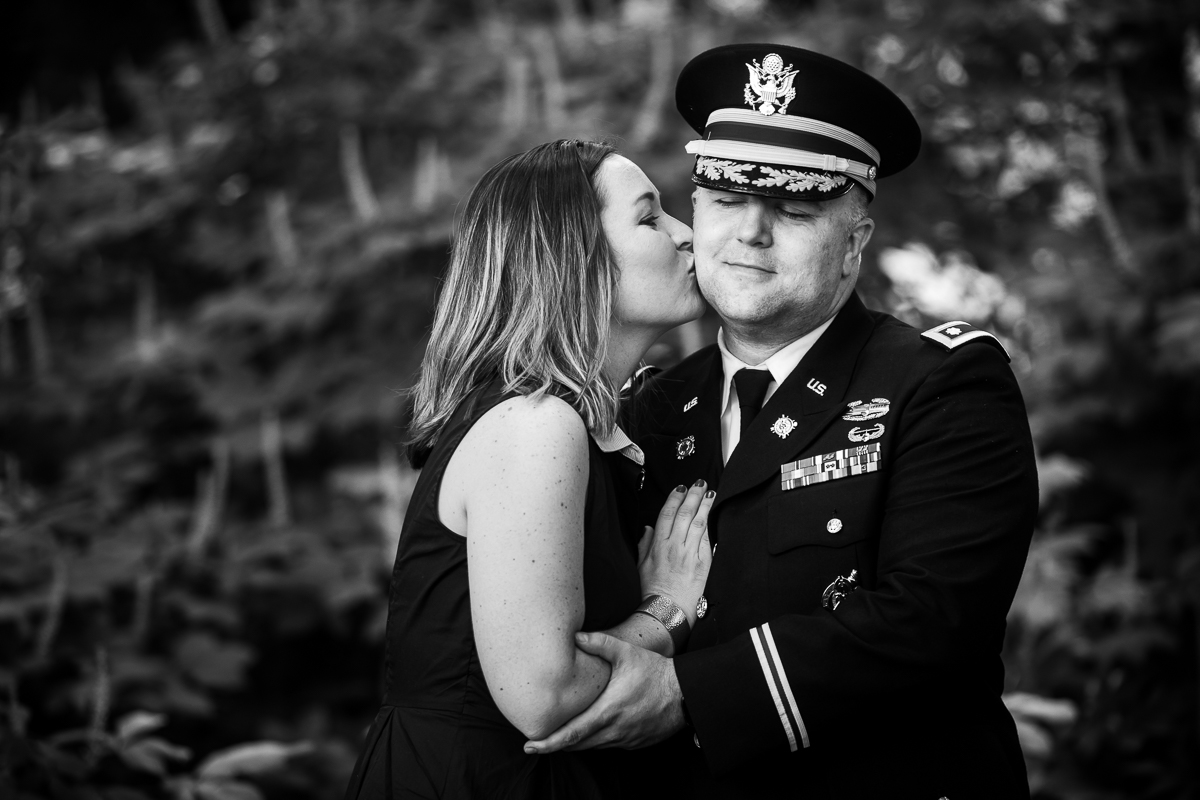 Having a chance to take some creative photos like this one of Dan silhouetted against the sky is what I’m all about.

I love capturing unique perspectives and angles during sessions., playing with silhouettes are another one of my favorites. 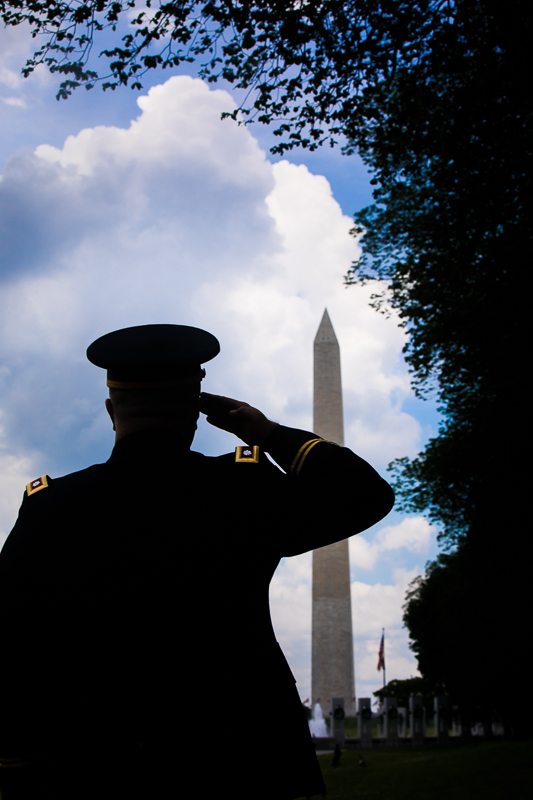 The family is heading home after the promotion ceremony! Something about the simple moment of them crossing the crosswalk together is so sweet. 🙂

For me it captures a tour bus “tours USA” in the background when their father has been on a fair amount of very different “USA Tours.”  The one way signs point in opposite directions.   He’s holding his son’s hand and a folded flag along with USA letters from his reception table.

The dramatic lines, colors and photojournalistic vibe, all made this photograph such a great candidate for black and white.

See more touching photos from the Kosters’ DC promotion ceremony and family session in the slideshow below.  Warning it might make you cry, it had that effect on me.

Leiutenant Colonel Kosters, thank you to you and your family for your service in the United States Army.

Read more about the different photography services I offer here