Sunset, and fireflies and Milky Way, oh my!!  Hannah & Andrew gave me full creative control during this Milky Way after-session and wow, did it pay off! 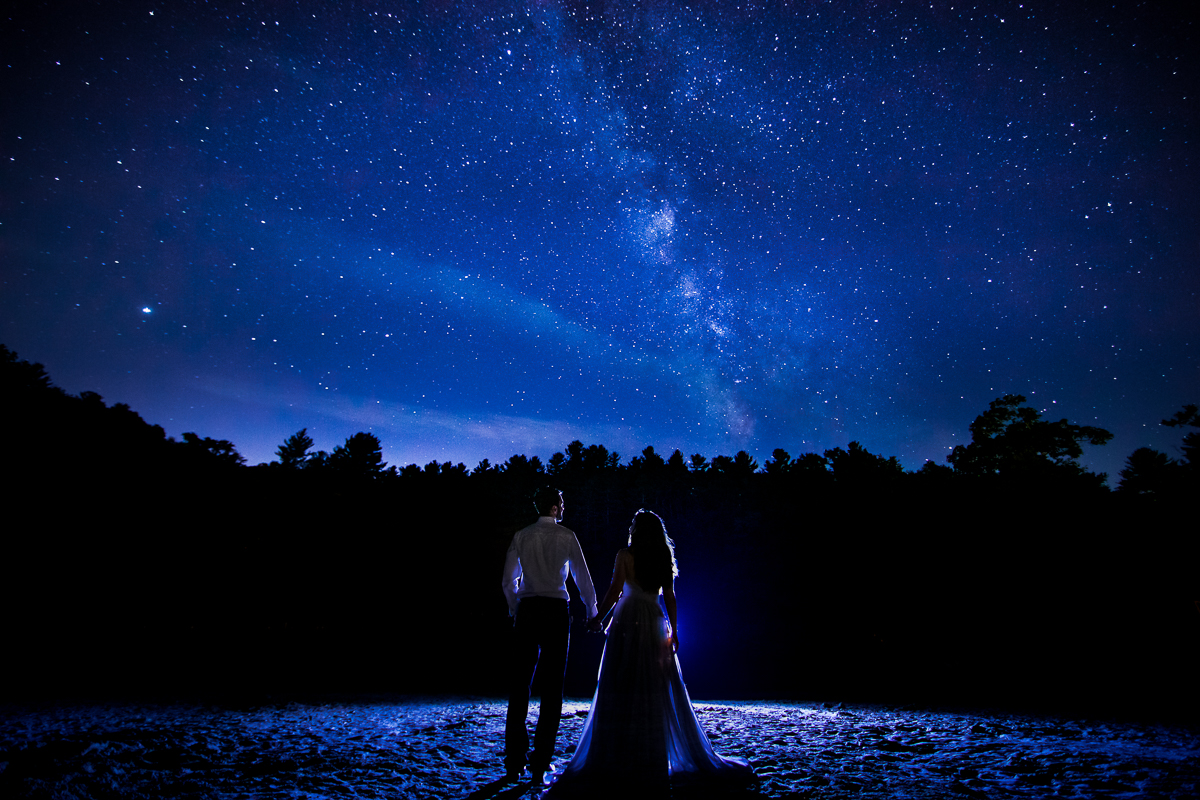 A Couple’s Trust Allows me to Move Mountains

Hannah & Andrew had benefits that few others have had working with me.  Due to a global pandemic, they ended up having me at BOTH of their weddings: an intimate ceremony at The Line in Washington DC, and a 4th of July picnic gathering with all of their friends and family in Arlington, VA and to top it all off, at their Milky Way after-session.

The biggest thing this built for us was *trust*. They KNEW I had their back– I had it with all the scheduling changes, and they saw the results of trusting me from the past and were **all in**.  This gives me a huge advantage as a photographer.  That’s when I can really get creative.  And in this case, not just with what we’d do, but with where we’d go, in all of it! 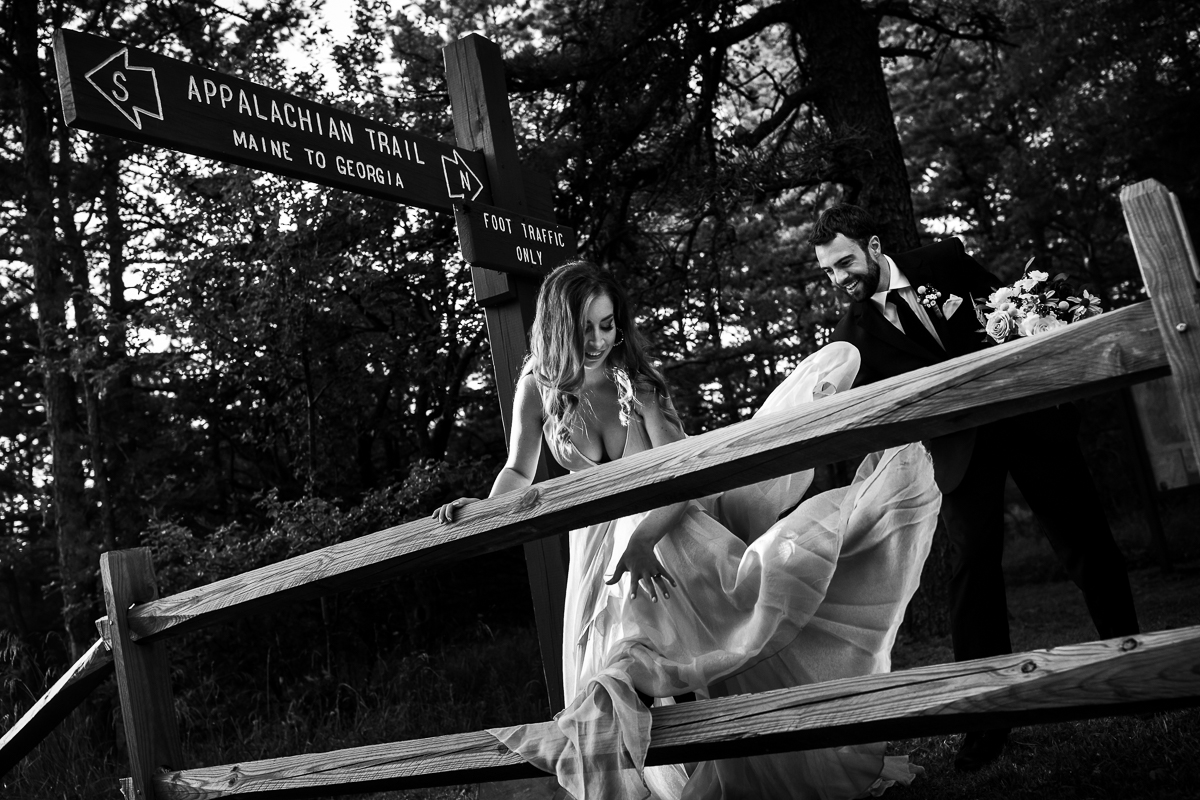 An Artistic Partnership– Yaaas, this is where I soar!!

Andrew elaborated, “For the after session, we really let you lead us. We let your vision and ideas guide us. We already felt comfortable and familiar with you from our past sessions as well as our video-conference sessions leading up to it. Our comfortability and trust created the perfect situation for a wonderful artistic partnership.”

He continues, “While we approached you with, “we want to stargaze” and showed you some pictures of a starry night sky in the desert, you took that idea and ran with it.  Most photographers would not say, “Let’s do it!” Many photographers would dismiss/reject the idea due to the logistics or difficulty of that kind of shoot. I mean you don’t even live in a desert!  You embraced the challenge and wanted to make it the best it could be.” 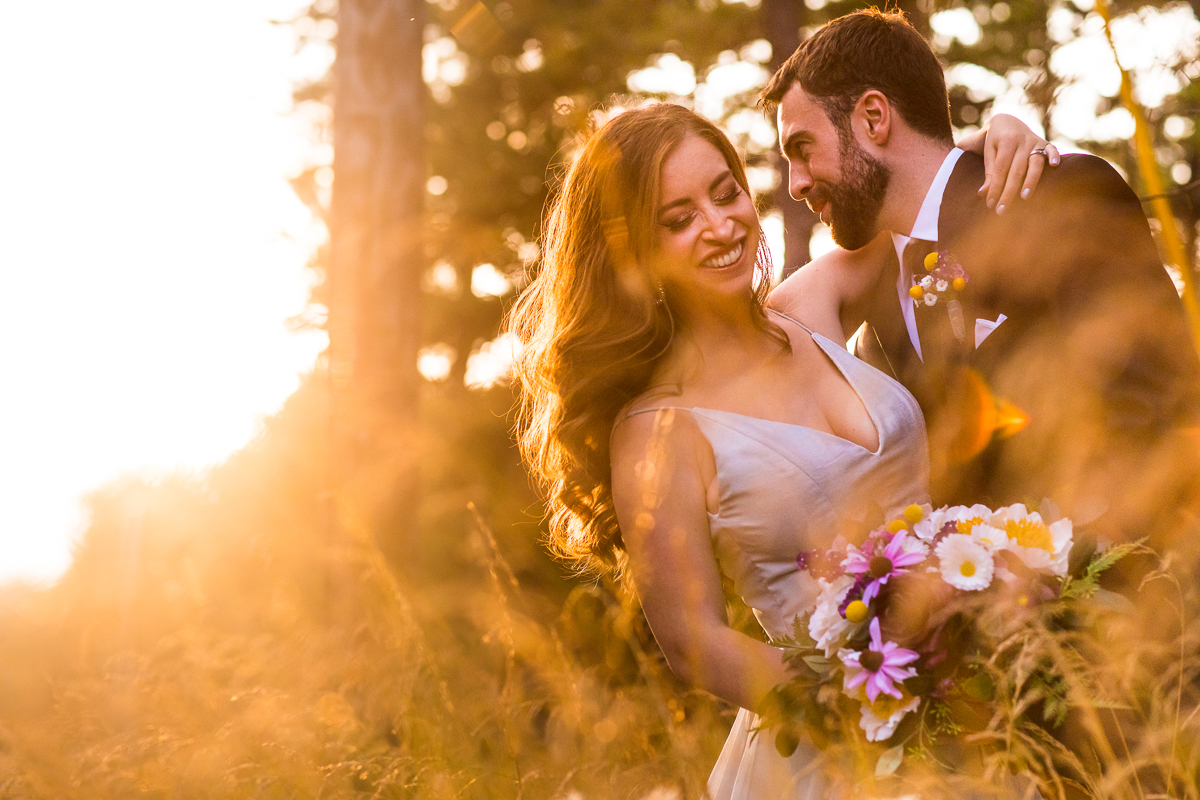 An After Session is a photography session for the bride and groom, after the wedding day that captures the couple’s romantic images.  It allows more time, flexibility, and creativity for beautiful photos you might not have had time for on the wedding day. Love all the photos from Hannah & Andrew’s Milk Way after-session? Read more about booking one here on my blog!

How cool is her wedding ring? Read more about their amazing proposal story here.

Just the Two of us

They share, “The main thing we wanted out of this session was to convey the love we had for one another on a deeply personal level. The picnic photos and, to some extent, the wedding photos were more an opportunity to photograph a time and place with friends and family. But the after-session was very much meant to be all about the two of us.”

I’m obsessed with all of these stunning photos we took during their Milky Way after-session. 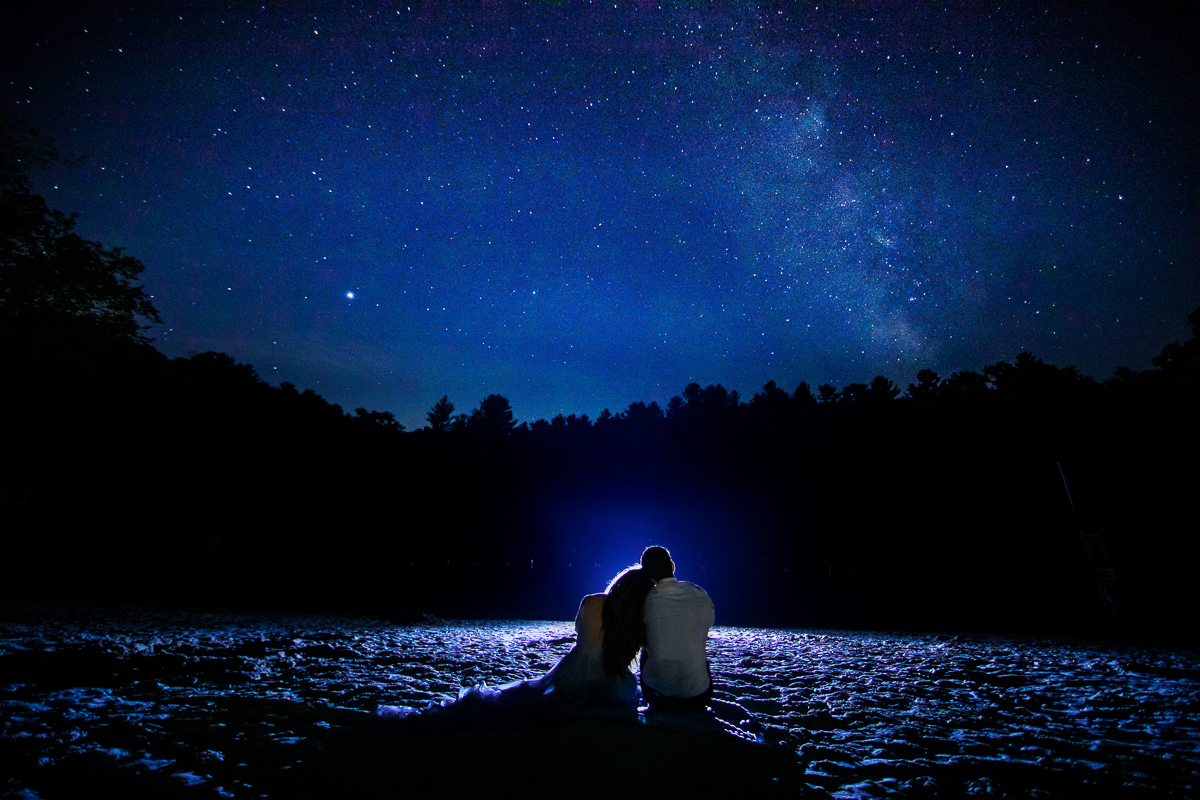 Andrew shares, “The dress really spoke to Hannah when she saw it. The metallic color evoked the idea of stars and space, which was appropriate for how we both met. This was not always the intended dress. Originally when the big event was supposed to be at the Carnegie Institute, the dress was going to be a large elegant ballgown, but it was not as good for dancing or movability. When the event venue changed last year, Hannah knew this was her opportunity to go with the dress she originally liked the best. While not white, it is elegant enough that one can instantly tell it is a wedding dress just by looking at it.” 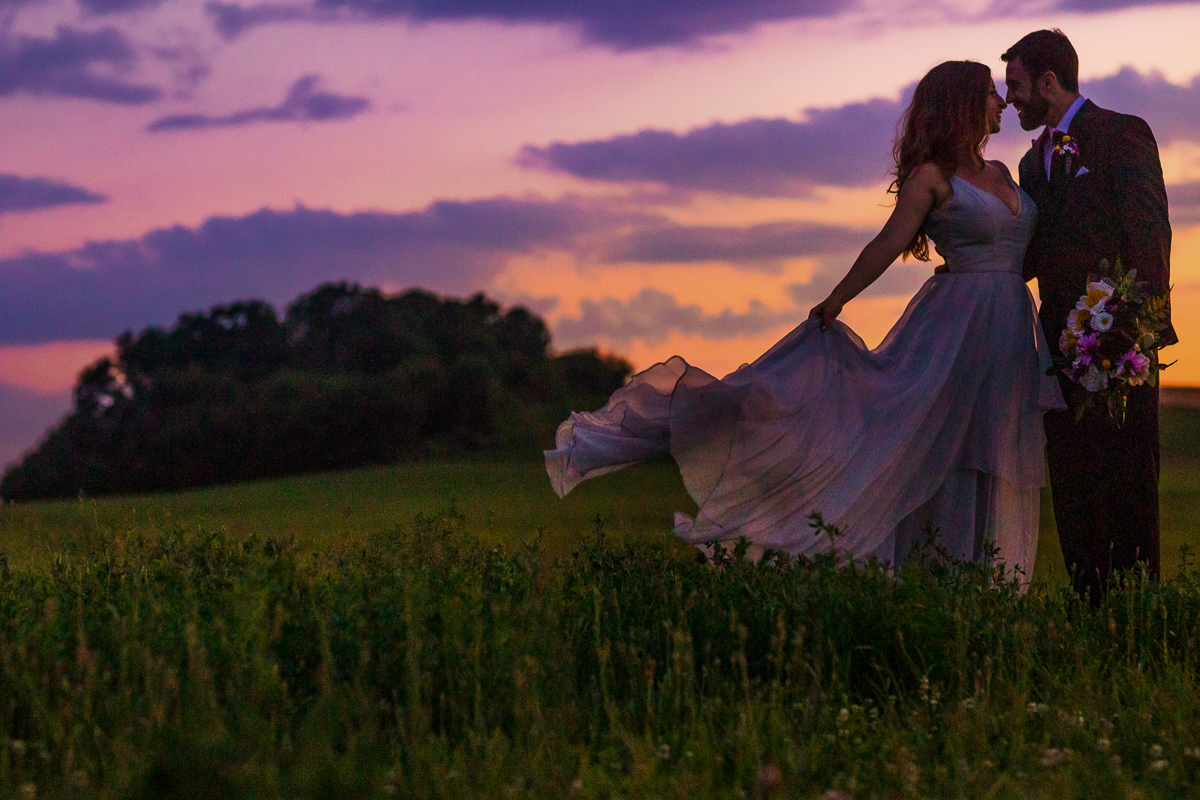 He continues, “The look is cool and different and great for movement at the same time. The movability aspect is obviously excellent for photography! There were a lot of shots where we “threw the dress” and the results are super cool!” 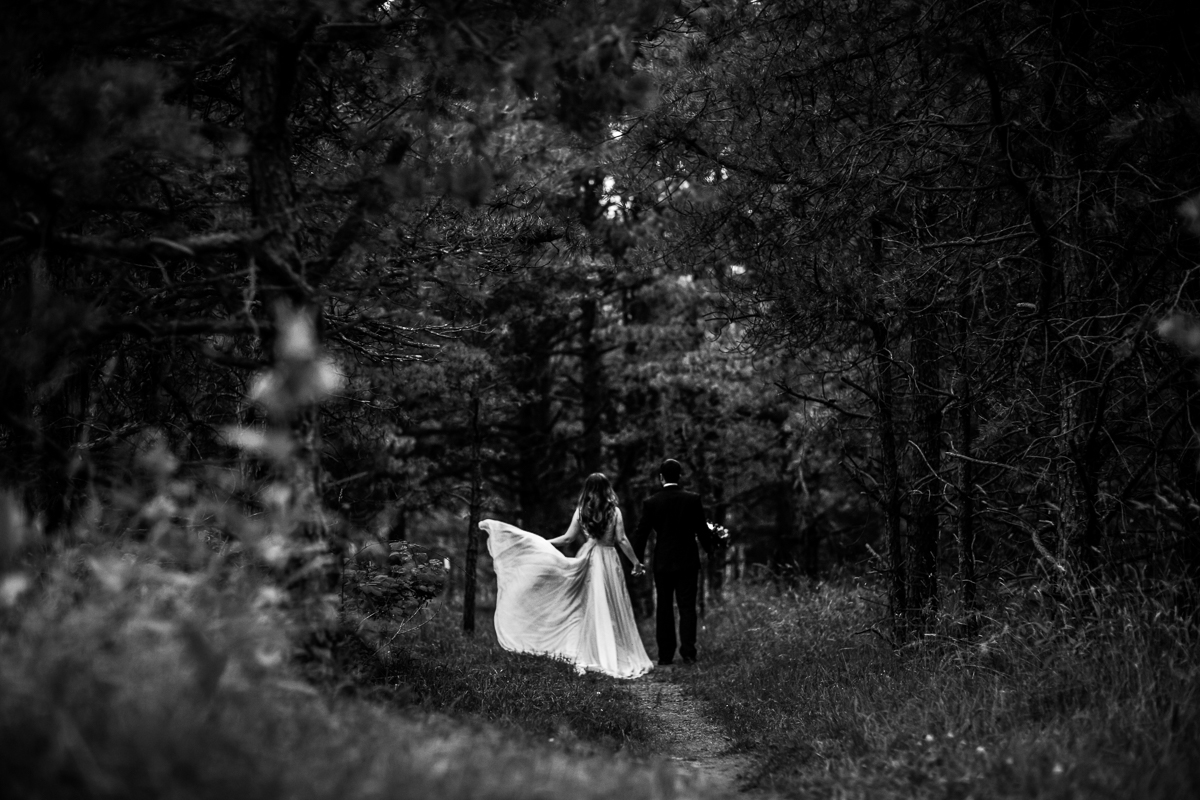 Hannah is the Reason…

Andrew smiles, “Hannah is the reason I look forward to coming home at the end of every day. She is the reason I do the things I do. An experience or feeling is not “real” until I share it with Hannah.” 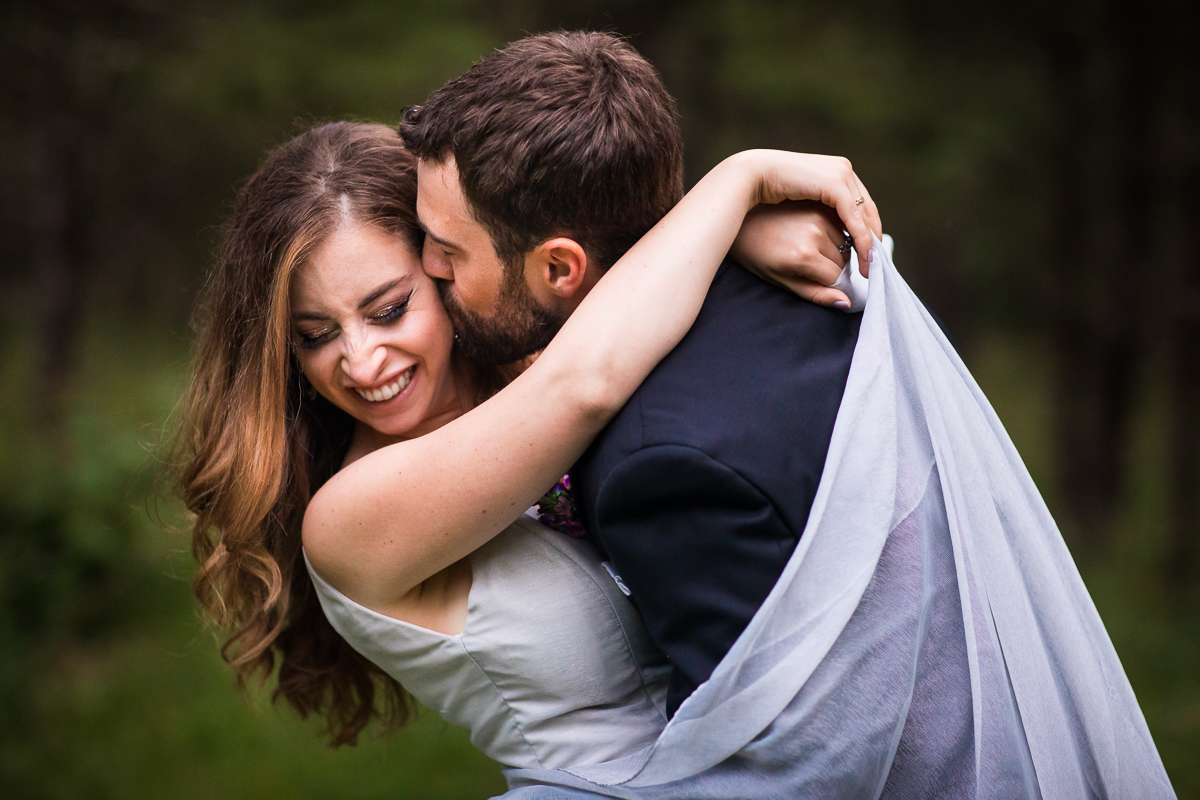 A Tunnel of Fireflies

This “tunnel of fireflies” is less than a mile from my home and a place that is magical and that I visit often.  Those little streaks of light are fireflies!!  This shot was very complicated, too.  I used a slow shutter and illuminated the couple and canopy with a flash that I programmed and operated via radio signal (fancy, I know).  It is a composite of several minutes of firefly activity.

It took us a while to get this shot, 20 minutes to be exact!  This was my first time ever trying photos like this and Hannah & Andrew were so patient, just enjoying the firefly glows at their Milky Way after-session. 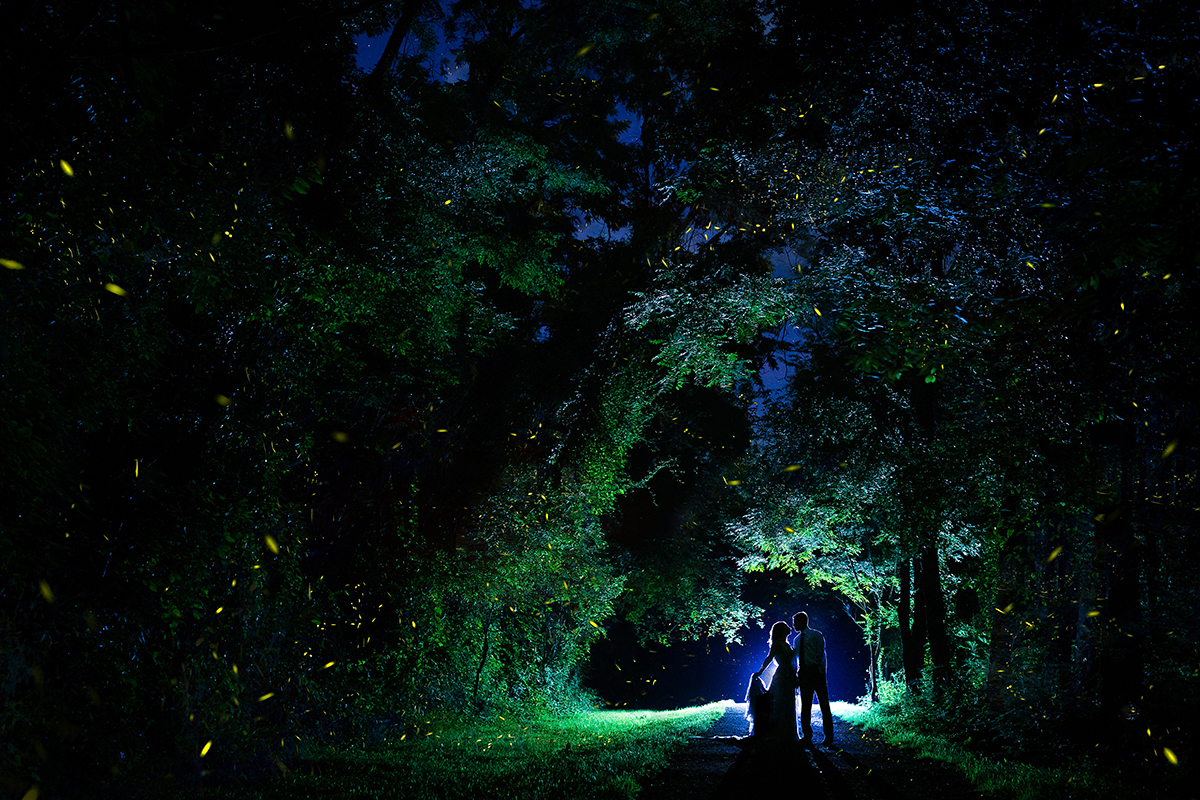 Hannah and Andrew (and my photos) appeared in VIP Alexandria Magazine with their wedding at The Line in DC.

They share, “We were excited to have your photos of us featured last year in VIP Alexandria Magazine (one of which was a picture where we “threw the dress”).” 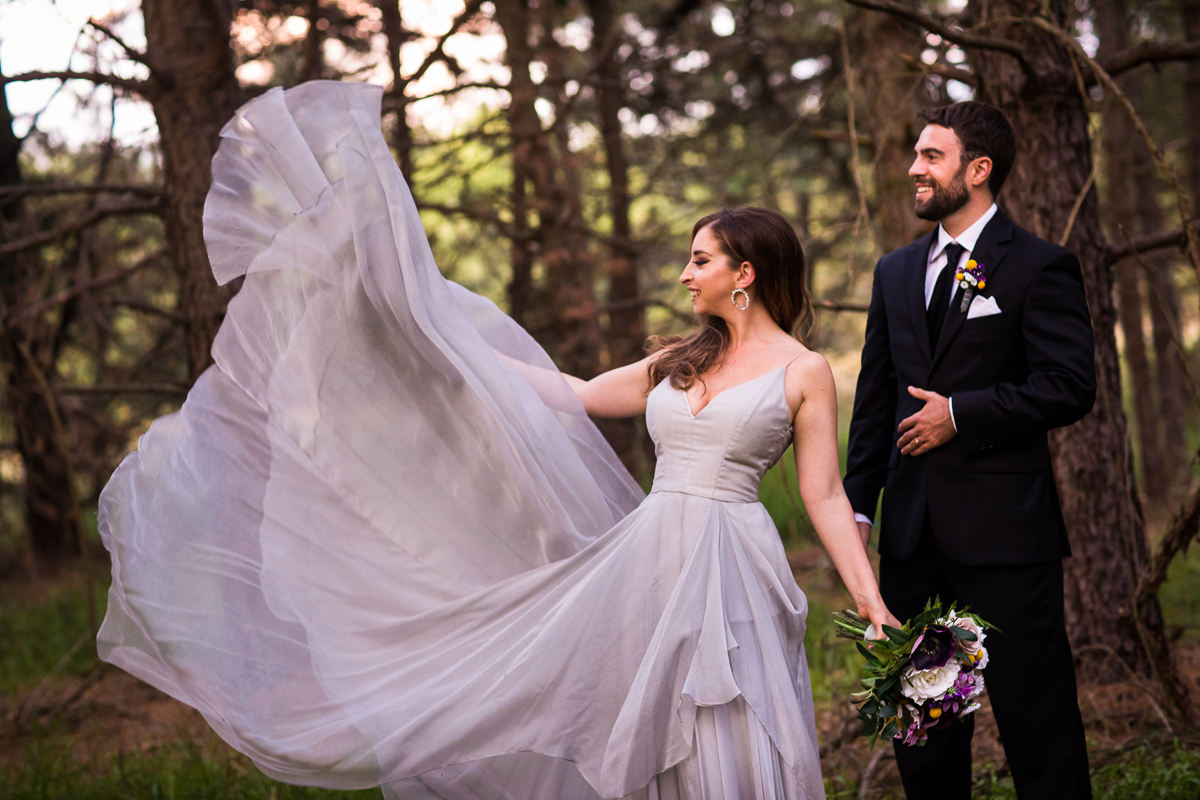 Hannah shares, “Andrew is a lovable goofball, and he is a reliable and trustworthy companion.  We have a similar way of balancing being silly/ playful and being serious/ responsible. I wanted Andrew to be my partner for life because he’s my best friend, and we are a family.  Our romantic partnership is amazing, and we also treasure our family-oriented partnership.  We love each other and take care of each other, and we aspire to have kids and more pets to be a part of our happy family.”

It All Started with an American Flag Speedo

Hannah smiles, “Andrew and I worked together at the Air and Space Museum for two years, but our paths didn’t cross until my final summer there. My friend showed me a picture of him in an American flag speedo and I was quite taken with the photo, haha! I eventually asked him out, and I was astounded by how well we got along on the first date!”

Andrew laughs, “Yes, the American Flag thing all started because the first time Hannah saw me or at least remembered seeing me, was from a photo of me on social media wearing an American Flag speedo in front of the Fountain of Geneva (it’s an absurd picture). That image became what Hannah associated with me. So from there, we thought it was fun to play up the American Flag thing.”

They continue, “The night shoot was fun. At the end, we switched into our swimsuits and did some photos there.  After you left, the two of us hung out a bit more and even took some cheap cell phone pictures. I accidentally ended up texting a series of swimsuit pics I took to my grandparents the next day by mistake. Whoops!” 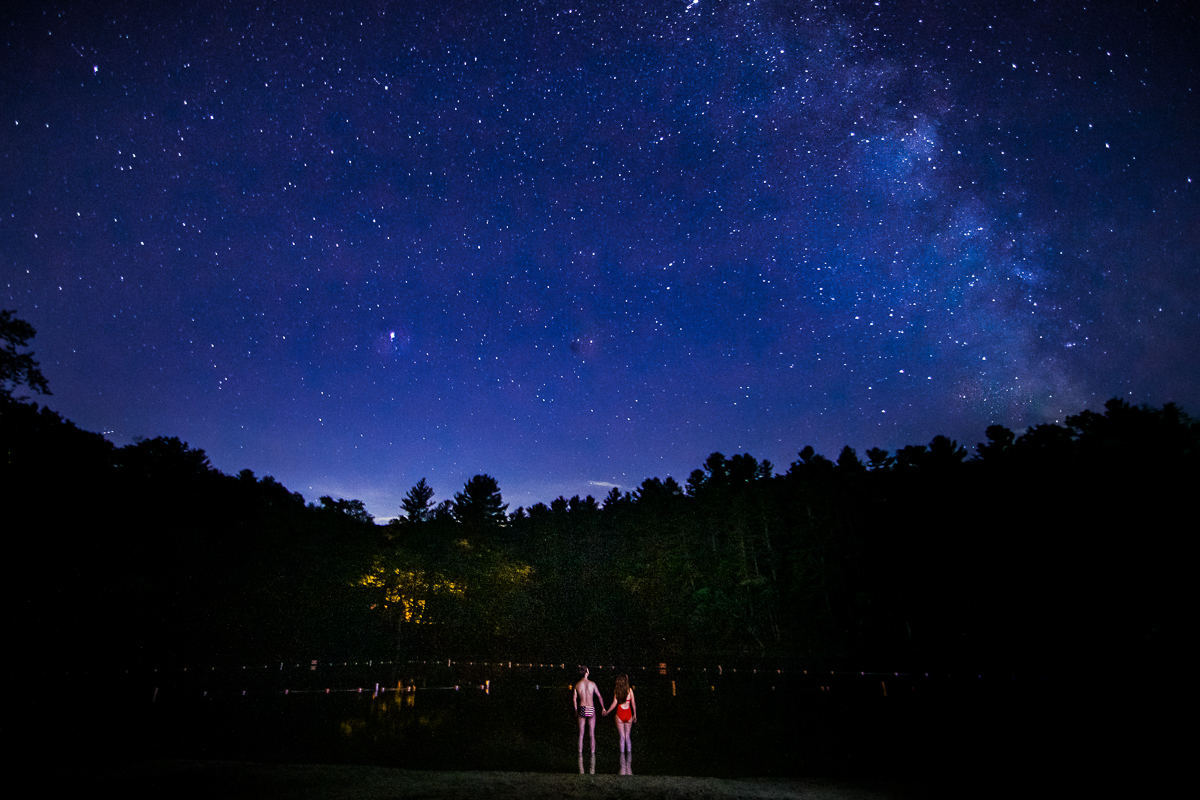 Andrew shares, “We discovered extremely early on that we were compatible. The moment for me – and I think for Hannah as well – was a day in August of 2014. Earlier that day, I learned that my childhood cat had died and I was quite sad. Evidently, he died a few days earlier, but my parents withheld the news for a few days. I was sad and wanted to distract myself by doing something fun. I reached out to my friends one by one to see if anyone was able to hang out right then and there, but on such short notice, no one was available.”

He continues, ” I decided to reach out to someone who I knew from work (although at this point, she had either just left the job or was about to leave the job). We worked together at the museum and worked a lot of shifts at the “wind tunnel” exhibit, but most of our interactions up until that point had been at work, not out in the city. I knew I enjoyed spending time with her.”

“We had already gone on one “date” (although we did not call it a date), so I had a good sense that she liked me too. When I asked if she wanted to hang out, she not only said yes but jumped at the chance. 30 minutes later, we met up in her neighborhood and visited a German restaurant nearby (a block and a half away from the Line Hotel DC, where we would later marry)!” 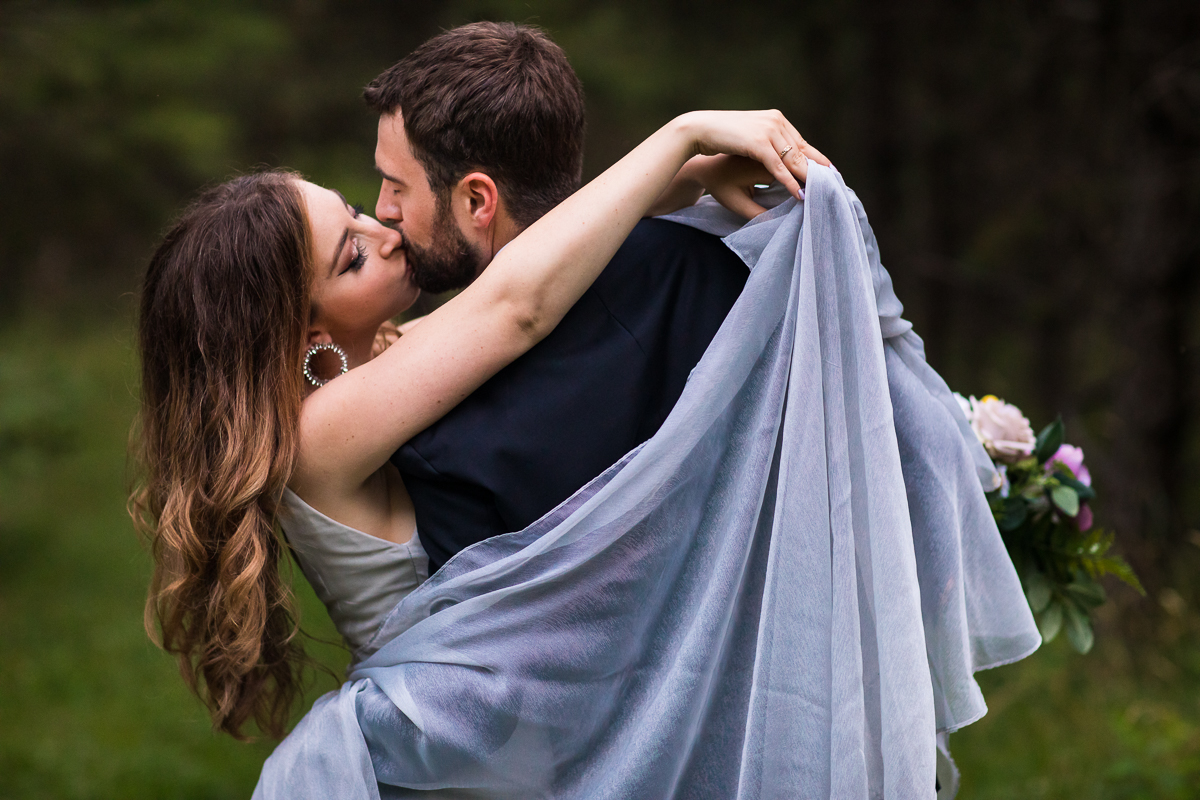 He continues, “Hannah ordered a sausage and I ordered a complicated sandwich called Doner that was full of fillings that kept falling out everywhere! It was at that restaurant that we first realized our conversational compatibility and the fact that neither one of us had to be fake with each other or put on a mask. We could be our authentic selves (easier said than done when it comes to dating). During our meal, Hannah suggested going to a comedy show, which we did a few minutes later. The walk from the restaurant to the comedy show was probably about a mile and a half, but the walk was so enjoyable that the distance did not matter. We even walked back to go to a nearby bar after that. We walked everywhere!”

“Sometime later in the evening, I informed Hannah about the death of my childhood cat. She was comforting and sympathetic, but I told her that I was having such a good night, that I was not even sad. It was exactly the comforting, pleasant, lovely evening I needed in what would have been an otherwise sad, lonely night. That was the day when I realized Hannah was good for me. And I think that night gave her the same realization.” 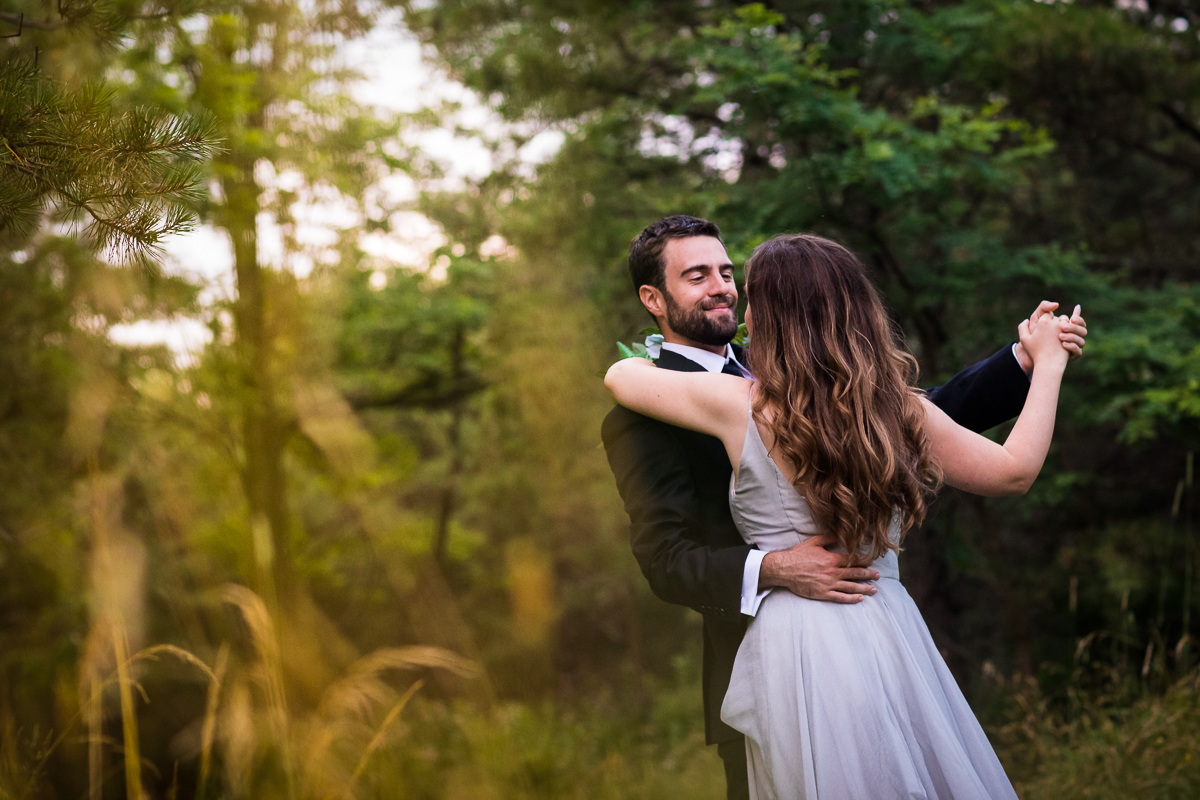 Satellite, In My Eyes Like a Diamond in the Sky

A little DMB shout-out– love that album so much!!  And, I’m pretty sure this is a satellite.  I was beyond lucky here, it was just perfectly positioned and **not photoshopped**. 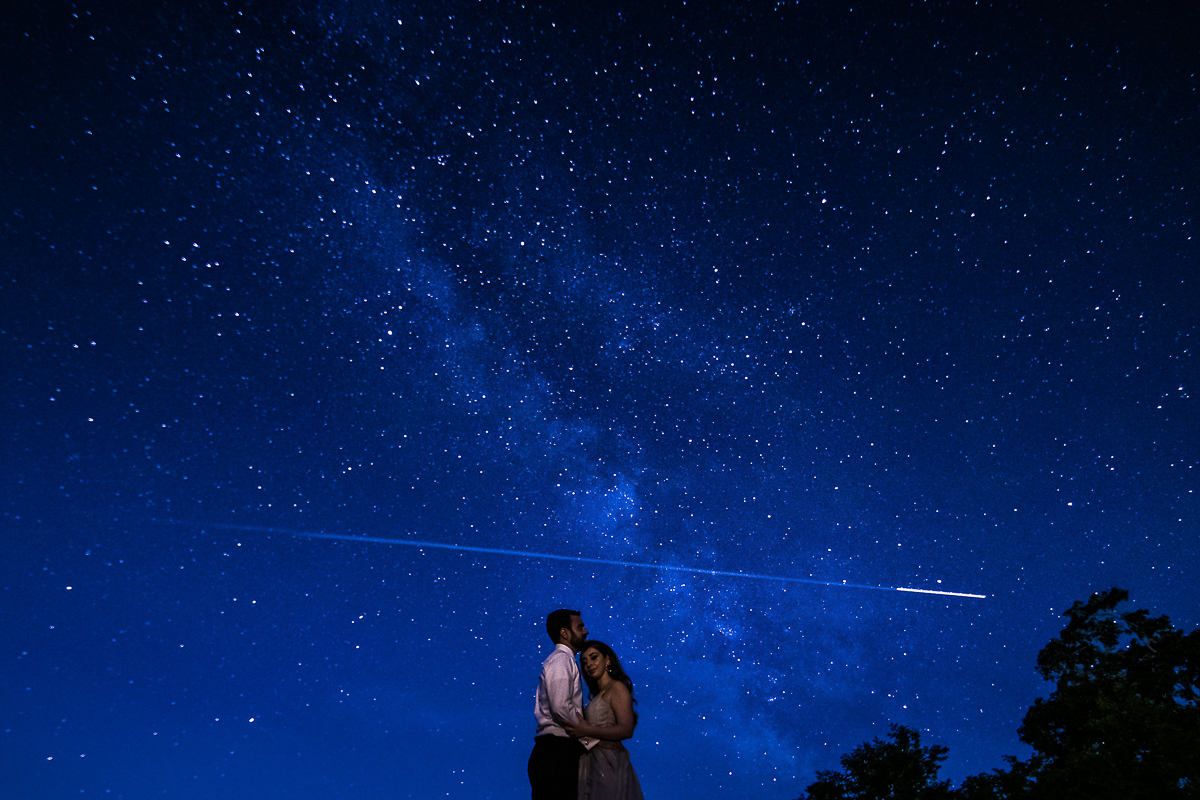 Andrew shares, “This may come as a surprise, but the florals were not fresh. They look fresh, but they are false flowers designed by an artist from Baltimore who makes extremely realistic false flowers. We wanted to have flowers because having something to carry added to the dynamics and look of the photos.”

I couldn’t believe it! They sure look real!! 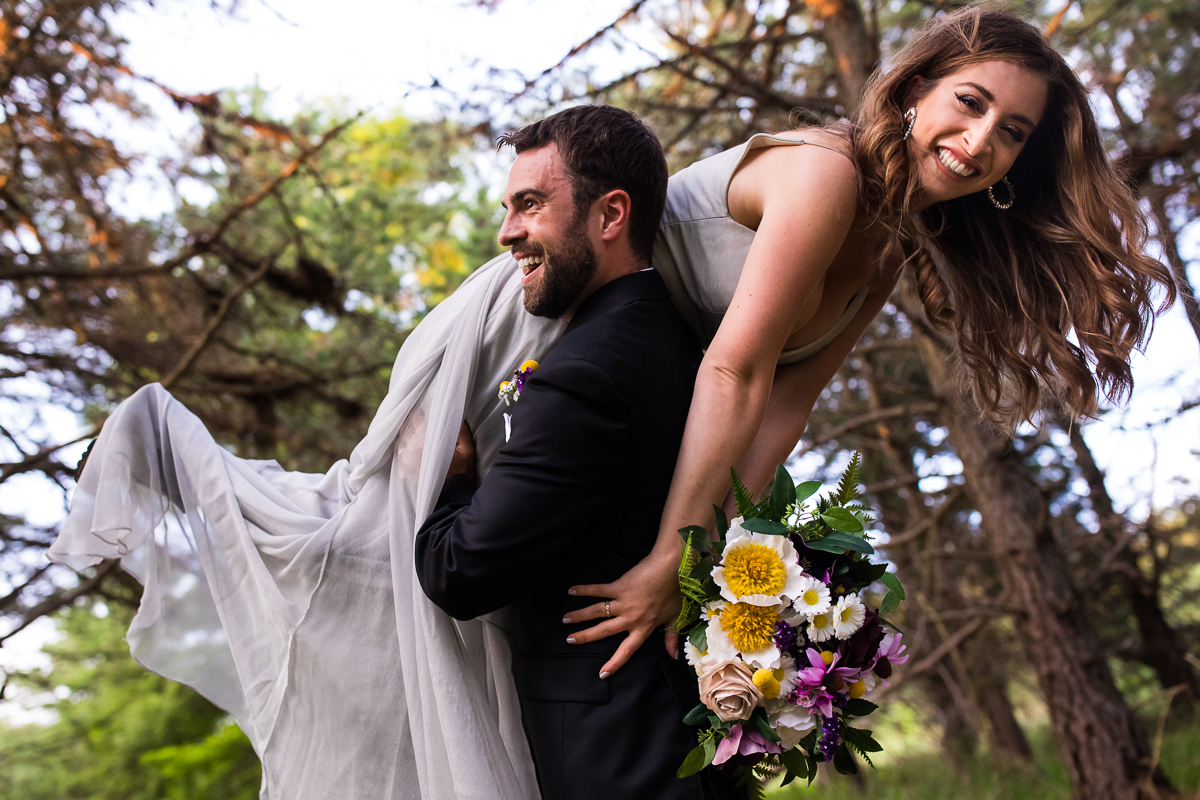 Andrew says, “The sunset picture, in particular, was very important to Hannah as it reminded her of when we got engaged in Puerto Rico – only that was a sunrise, not a sunset.”

He continues, “The boots were great for walking on the dirt, mud, or sand, so it was very much a practical decision, but it added a fun contrast of wedding dress + boots. A unique look for sure!” 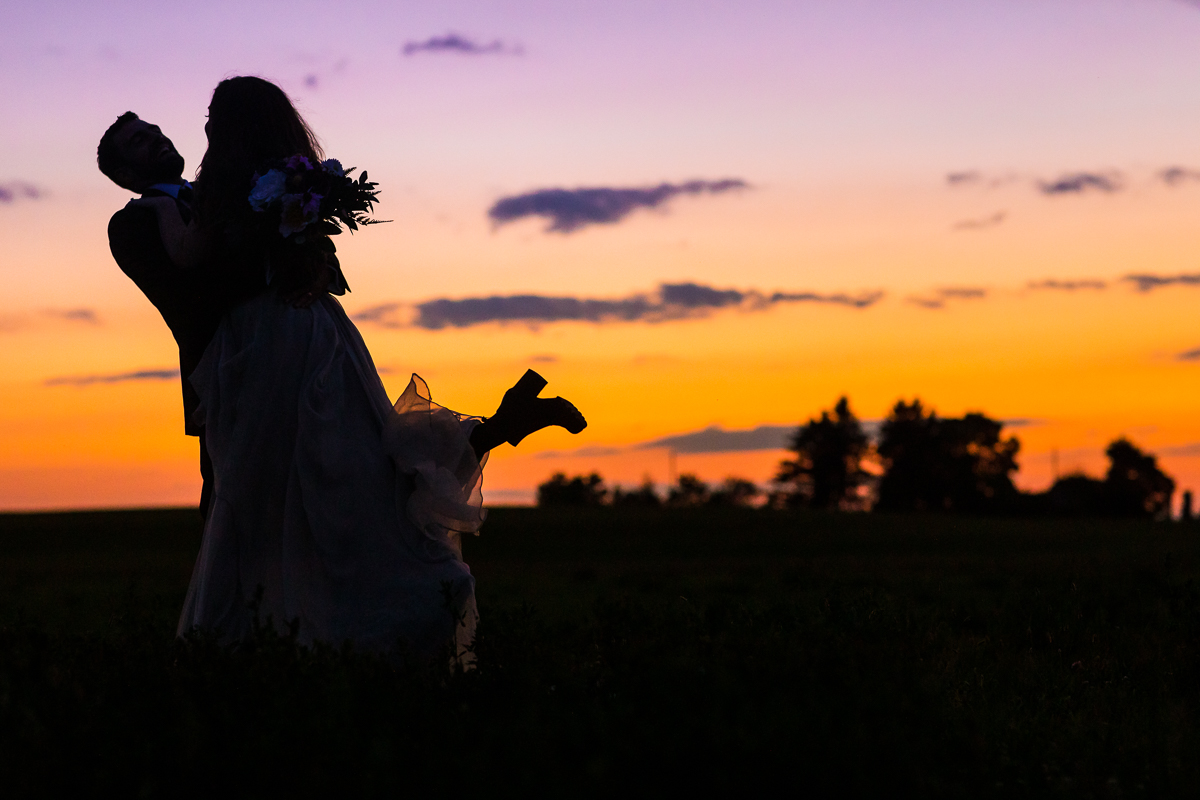 Andrew shares, “The whole photoshoot took many hours, but it felt like it went by so quickly because we had so much fun. By the end of the night, it was extremely late, but we still had energy. I think that is a testament to the fact that we had so much fun and we were enjoying each other and enjoying the moment.  You helped us to feel comfortable and at home in front of your camera.”

He continues, “I was so impressed with the way you handled this part of the shoot.  Even when reaching for these technically difficult shots, you did not lose sight of the emotions either. You made sure to get shots of us running, jumping, dancing… You did not let the technical difficulties stop you from remembering the emotion/character.”

I had the absolute best time experimenting with astral photography during their Milky Way after-session! Thank you both for trusting me. 🙂